Spectacular success for HOCHTIEF engineers on the A 45 highway: At the beginning of March 2021 they managed to achieve something that had never been done before in Germany: They skidded a bridge that is almost 1,000 meters long.

It was a premiere in Germany—and HOCHTIEF successfully mastered it: Since 15:35 on Friday 5 March, the almost one-kilometer-long Lennetal Bridge on the A45 highway is in its final position. The colossus made of steel and concrete, which weighs 30,000 tons, was previously moved 19.15 meters sideways in the course of precision work lasting 6,5 hours. It is located just a few centimeters way from a twin bridge, across which traffic is currently flowing in both directions. Never before has anyone in Germany attempted to move a bridge with this dimension in such a way. “The highlight of our construction project succeeded, and I am proud of our team. That was precision work,” says HOCHTIEF Project Manager Jan Felgendreher. “That the transverse sliding was carried out so successfully today paves the way for future construction projects,” said client Elfriede Sauerwein-Braksiek, Director of the Westphalia branch of the state-owned Autobahn GmbH.

The transverse sliding was necessary in order to minimize restrictions on the highway traffic during the construction period. Every day around 90,000 cars and trucks drive through this part of the highway. The enormous traffic volume made the new construction necessary to replace the Lennetal Bridge, which was built in 1967. The first work began at the end of 2013, and the six-lane bridge is scheduled to be opened for traffic in summer 2021.

HOCHTIEF has realized numerous large bridges all over the world—recently, among others, in Edinburgh, Scotland, and in Montreal (Canada). The company meticulously prepared the transverse sliding on the A45 highway together with Autobahn GmbH. Thousands of hours were invested in the planning, and a test was performed last year in Switzerland. Today an expert team consisting of 60 employees was responsible for the implementation. HOCHTIEF Project Manager Jan Felgendreher: “We pulled the bridge simultaneously at 15 points. The tolerances were down to the last millimeter, and every step had to be perfectly executed.”

HOCHTIEF is currently implementing numerous large-scale bridge projects in Germany. In North Rhine-Westphalia, this includes the new construction to replace the A40 highway Rhine Bridge in Duisburg-Neuenkamp and the construction of the Leverkusen A1 highway Rhine Bridge and the new construction of the inner Schwelmetal Bridge in Wuppertal. The Group is building the Neckartal Bridge on the A6 highway near Heilbronn in Baden-Württemberg. Within the course of the expansion of the A7 highway in Hamburg and Schleswig-Holstein, HOCHTIEF also rebuilt the Langenfelde Bridge. 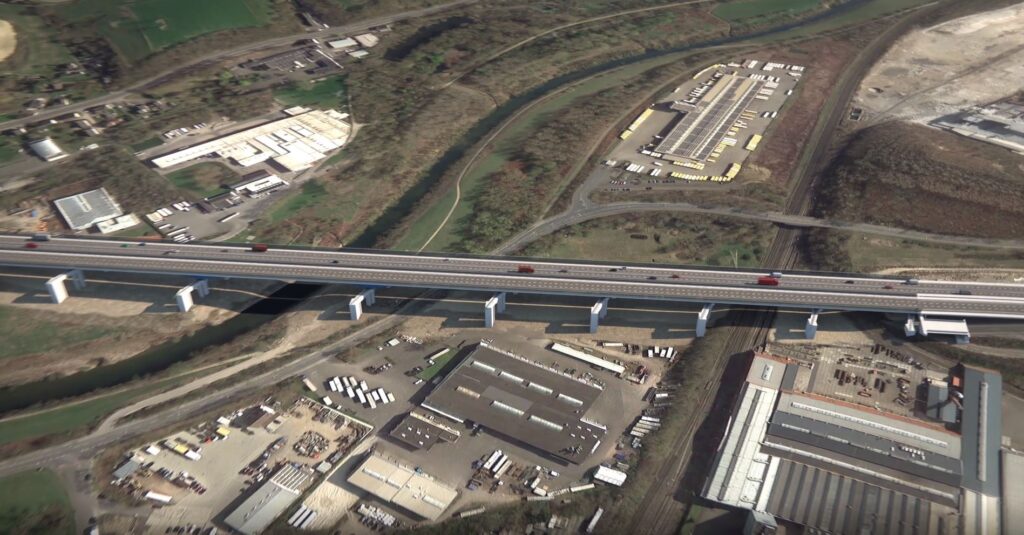 Eight Cranes on One Project