Crane and heavy transport contractor HKV Schmitz+Partner GmbH, based in Cologne, used three 500-tonne Liebherr cranes to transport a gas turbine from the port at Chempark Dormagen to a new-build power plant at the neighbouring site occupied by INEOS Köln GmbH. Two LTM 1500-8.1 mobile cranes hoisted the turbine out of a freighter onto a heavy haulage vehicle and an LR 1500 crawler crane then placed it on a prepared site once it had arrived at the INEOS plant. 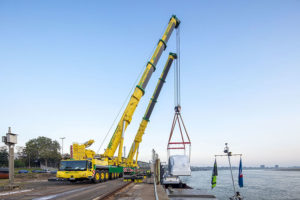 A special structure built over the track is used to provide perfect support.

Chempark Dormagen is a 360 hectare site in Dormagen and Cologne-Worringen, which is occupied by dozens of businesses from the chemical industry. Immediately next door to it is the site owned by INEOS Köln GmbH, part of the INEOS Group, one of the largest petrochemical companies in the world. A new gas and steam power plant to cover the site’s own demand is currently being built at the Cologne plant. This project is being supported by HKV Schmitz+Partner GmbH, which is in charge of both the engineering and the crane work. From a site inspection and demand analysis to computer-aided planning using CAD, HKV is in charge of the technical review and drawing design of the procedure and the corresponding risk assessment to ensure that the work can be carried out both effectively and safely.

The first gas turbine for the power plant has now been delivered by freighter. The two LTM 1500-8.1 cranes had been set up with their maximum ballast of 165 tonnes to hoist the turbine out of the vessel and position it on a low loader trailer operated by Viktor Baumann GmbH & Co. KG based in Bornheim. Supporting the LTM 1500-8.1 cranes on the quayside was a challenge as the outriggers had to be positioned towards the ship over a rail used by a port crane. This meant that an extremely precise calculation of the transmission of the support forces and a special structure had to be built over the track. 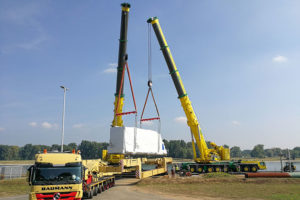 The low loader trailer, which could be lowered to an extreme degree, proved to be the ideal heavy haulage vehicle for passing under pipe bridges.

When the turbine was driven into the INEOS plant, it had to pass under several pipe bridges. The low loader trailer, which could be lowered to an extreme degree, proved to be the ideal heavy haulage vehicle. Hoisting the load and placing it on the prepared area of the site proved to be nothing more than routine for the LR 1500. Positioning the turbine in the power plant at a later date will be a more challenging task for both the crane and operator.

HKV purchased the LR 1500 in March this year, the first crawler crane in the history of the company. The main criteria behind the purchase included its short set-up times and high lifting capacities despite its very compact design. Managing Director Michael Schmitz, who is responsible for the project at INEOS, is delighted that the decision to buy the LR 1500 was the correct one. He commented: “Whilst planning the gas and steam power plant project, which we started well over a year ago, we decided that the Liebherr LR 1500 would be the perfect crane for the job. We had to transport heavy loads over a bongossi track and hoist them into the site. That meant we needed a crawler crane. The power provided by the LR 1500 together with the ease of operation and safety of the crane are paying dividends for this project. It also means that we can provide our customer INEOS with the most modern crawler crane in this class, and therefore the best tool for the job.”

Rolf Weyers, who is responsible at HKV for the project and the completion of the crane work, agrees: “The challenge is to plan all the hoists on the site safely with a minimum space requirement and to plan the operations in the flow of the job site. Unloading the turbine was the first heavy hoist for which we used our LR 1500. And it is always a challenge regardless of how much experience you have – the turbine has an asymmetrical centre of gravity which is why planning the lifting tackle was so important. It was perfectly suspended on the LR 1500 after it had been unloaded from the low loader trailer whilst it was transported over the site as planned.” 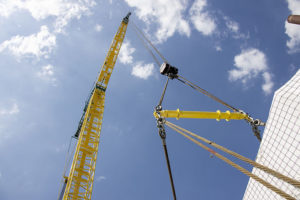 Planning the lifting tackle was particularly important as a result of the turbine’s asymmetrical centre of gravity.

Crane operator Burkhard Forke is also full of praise for his new tool: “Compared to other crawler cranes I have used in the past, the LR 1500 with LICCON2 and all the monitors and features is both a more precise and a safer machine. The set-up work is even safer and easier for the team as a result of all the assistance systems and well-designed solutions. That makes it both a compact and a powerful crane!” 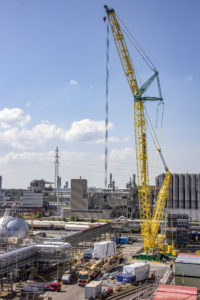 The set-up and transport surface for the LR 1500 had been prepared perfectly.

Kran-Maier GmbH Opt for a Liebherr LTM 1070-4.2 with State-of-the-Art Technology