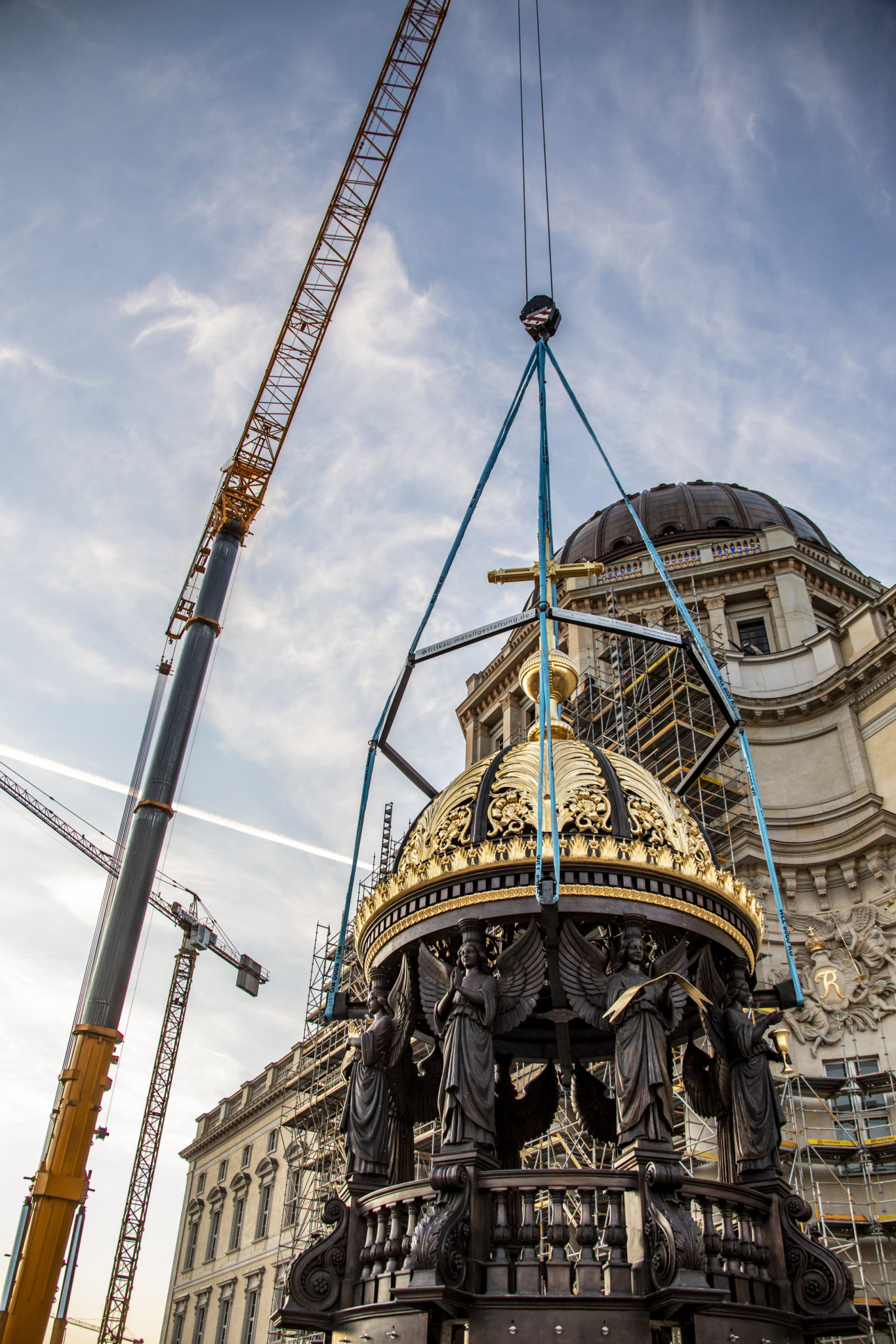 The hook of the LTM 1500-8.1 holds the magnificent cupola for the Berlin Palace, including features with eight angels, palm leaves and a golden cross.

An LTM 1500-8.1 owned by Mobi-Hub completed a job in the centre of Berlin in front of a large crowd – the Liebherr crane placed the magnificent cupola on the new Humboldt Forum. The historically reconstructed cupola is decorated with eight angel figures and palm leaves, as well as a lantern and a golden cross. The reconstruction of the destroyed Berlin Palace has been undertaken to restore Berlin’s historic cityscape.

Mobi-Hub’s 500 tonne crane made its way to the historic centre of Berlin in June. Since 2013, the one-time Berlin Palace has been under reconstruction in the form of a museum. As from the end of 2020, it will add to Berlin’s Museum Island, showing non-European collections and other exhibitions as well as staging public events.

The LTM 1500-8.1 crowned the Palace with its magnificent, almost completely historically reconstructed cupola. The public watched the cupola being hoisted by the 8-axle crane with great interest. It had been set up with a 42 metre luffing lattice jib and 90 tonnes of ballast to enable it to hoist the filigree load weighing 9 tonnes to a height of 70 metres. Berlin crane contractor Mobi-Hub completed the job smoothly.

Mobile-Hubtechnik Kranarbeiten und Transporte GmbH, known for short as Mobi-Hub, is based in Berlin and in addition to its crane rental services, it also increasingly provides planning, logistics and completion services for industrial and construction projects. The crane service provider has a workforce of around 80 people. Of the 40 cranes in its fleet, 34 bear the Liebherr brand name.

The LTM 1500-8.1 from Mobi-Hub crowns the Humboldt Forum in the centre of Berlin with the historically reconstructed cupola.

Liebherr at Work in the Kitchen – Video