International freight transporter Richard Heinbokel from Rostock celebrated differently for the company’s 100th anniversary. In 2019 the company bought 23 Scania R 500 and set the course for a continued successful company history.

It was an amazing experience for professional driver Gerhard Weber. For the past few months he has driven a brand new Scania R 500, one of the 23 new additions to the company fleet. “I am absolutely thrilled with the quality of the Scania,” he enthuses. “The interior, which is so important for drivers, is just great.” Gerhard Weber should really know about this, because the 49-year-old has been driving with Heinbokel for 20 years. 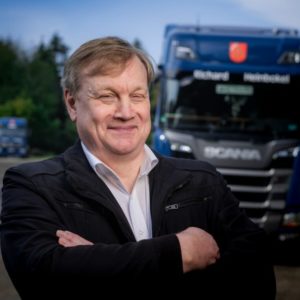 Due to the good experience with Scania over the past twelve years, Heinbokel treated itself to a special present for the 100th anniversary. As part of the fleet renewal, the company ordered 22 Scania 4×2 standard tractors with safety and dangerous goods equipment and a Scania 6×2 truck for trailers. In total, Heinbokel has a fleet of 85 trucks and about twice as many towed units traveling across Europe. It all started with a horse and cart in 1919 in the small village of Hemmoor between Stade and Cuxhaven. In the 90s Heinbokel moved their company headquarters to Rostock. However, many of the Scania trucks are now based in Hamburg, Gelsenkirchen and Leipzig. “We are there where the customer needs us”, said Managing Director Thomas Dyck, summing up the company philosophy.

Half of the fleet is used with tank containers. Heinbokel also transports animal feed in silo vehicles and tarpaulin trailers for the building materials trade. “We are literally like a taxi for the tank containers. We go where the customer wants to go. In the case of feed, it is a distribution from the factory to the farmers, and in the case of building materials from a central warehouse to the dealers, ”explains Dyck.

The drivers often spend the working week in their Scania. It is therefore important for the bosses that their employees feel comfortable in the truck. That is why Heinbokel pays attention to high quality equipment. With the R cab Highline, the transport company has ordered the largest possible cab for them. “The S-cabs as a Highline variant are sometimes simply too high for our traffic and can get damaged, particularly when transporting feed. That is why we chose the R series in the Highline version. The drivers also have two refrigerators and a coffee machine on board. In addition, there are extra-wide beds so that the driver can also sleep comfortably at night.”

When it comes to driver management, the bosses want to relieve driver stress as much as possible and rely on the Communicator from Scania to analyze and archive the tachograph data. The device transmits the driver card and mass storage data to the control center at regular intervals. The driver no longer has to worry about the transmission. This now also applies to third-party products. Heinbokel also had the Communicator installed with security and dangerous goods equipment for the transmission with the tachograph data. Safety and driver well-being come first!