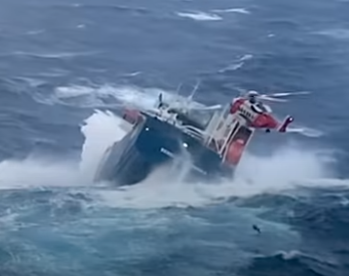 Smit Salvage have been engaged to recover MV Eemslift Hendrika. Smit Salvage Team to arrive in Norway when Corona Virus conditions permit, within 24 hours at latest.

Salvage Vessel not yet appointed.

Norwegian rescue teams airlifted 8 of the 12 man crew from Dutch registered heavy lift vessel Eemslift Hendrika. Later it was decided, at 20.00 yesterday, to airlift the Captain and three remaining crew members as conditions worsened. A crew member was taken to hospital with injuries.

Currently the abandoned vessel is underway on autopilot heading South South East on its own engine which is also reported to have serious problems. A Norwegian Coast Guard vessel and tugs are heading towards the vessel’s location to stand by.

The vessel was on a voyage from Bremerhaven to Kolvereid, Norway with deck cargo of vessels and vessel sections.