Karmsund Havn IKS has just signed a contract for a second Liebherr LHM 550. Only three years ago, Karmsund Havn ordered their first Liebherr mobile harbour crane, type LHM 550. The machine delivered two years ago brought additional business to the port, so another LHM 550 is now being purchased to meet the increased demand. The second LHM 550 will enable the Haugesund Cargo Terminal to offer tandem lifts of up to 308 tonnes for the growing offshore wind industry. 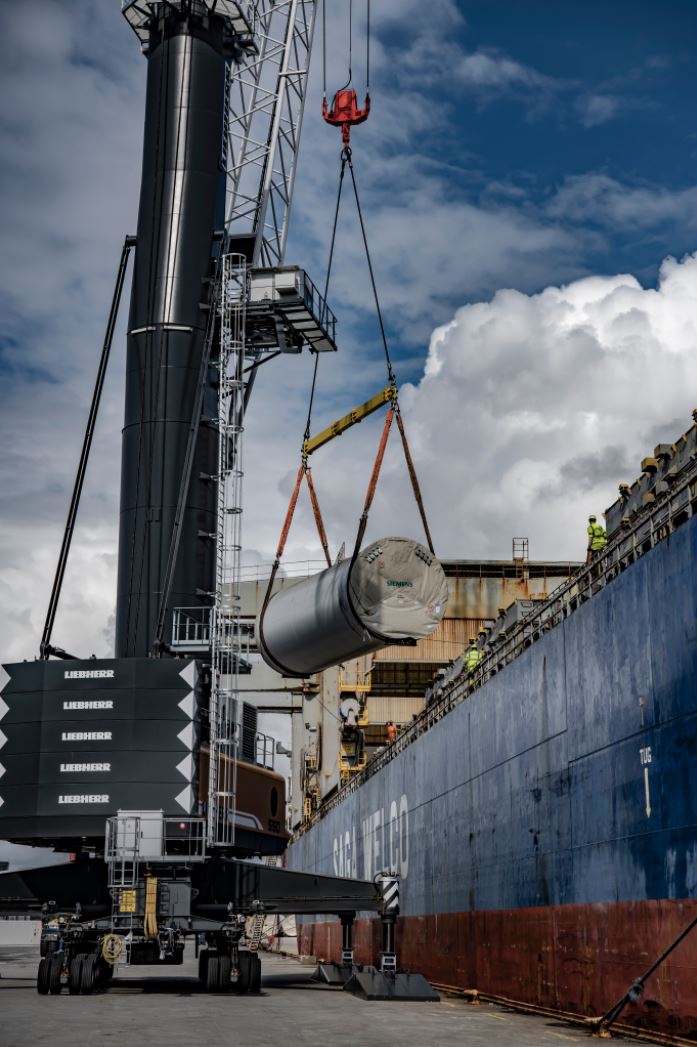 The first crane, acquired in 2019, has allowed container and heavy lift handling to flourish in the port. ( photograph courtesy of Port of Karmsund)

Business is booming at Haugesund Cargo Terminal. This positive development for the port of Karmsund is closely linked to the purchase of a Liebherr LHM 550 mobile harbour crane in 2019. The newly acquired crane has allowed container and heavy lift handling to flourish. “We have been very satisfied with our LHM 550, and with our collaboration with Liebherr. We have had far higher activity on the first crane than expected. Investing in a second LHM 550 after only 2 years of operation with the first one, says a lot about the development at the terminal, and also about the expectations for further growth,” reports Tore Gautesen, Karmsund Port Director.

The port of Karmsund is one of the largest ports in the region and now wants to become the top port address in Norway. For this reason, the port recently decided to order another

LHM 550 mobile harbour crane from Liebherr Maritime in Rostock, Germany. Above all, another crane is needed for the ever-growing project cargo business and for the booming offshore wind industry. A big advantage is the possibility to use both cranes for tandem lifts and thus even double the total crane capacity. “We are deeply involved in the project market and have the best equipment fleet in Norway for heavy lifting. The investment in crane number two will also give us great opportunities to position the terminal when handling modules for offshore wind turbines, as the crane offers possibilities for tandem lifts with crane number one with a total capacity of 308 tonnes,” Tore Gautesen continues.

The harbour crane will be operated on electricity, which corresponds with Karmsund Port Authority’s vision that the port should, as far as possible, be operated under the principles “Lean – Clean – Green”. The crane will be able to operate the entire dock area at Husøy, and is equipped for handling containers, bulk cargo and project loads. “The new mobile harbour crane will, like crane number one, be powered by electricity. This is in line with the Port of Karmsund’s goal of a green port,” adds Tore Gautesen. The new machine has a maximum lifting capacity of up to 154 tonnes and a maximum outreach of 54 metres. It will be shipped fully assembled by the heavy load carrier Meri from Rostock, Germany to Karmsund, Norway in March.