Legendary football stadium Estadio Santiago Bernabéu in Madrid is currently being refurbished. It will reopen in 2022 in the form of a superb, ultra-modern stadium with a wide range of positive features. The professionals at Spanish championship record holders Real Madrid CF have therefore had to leave the pitch – to be replaced by a whole team of cranes and construction machinery, playing a fascinating game, featuring an LR 1800-1.0 from Eurogruas 2000 together with an LR 1600/2 and an LR 1600/2-W from Gruas Aguilar.

Established crane contractor Gruas Aguilar has, at times, had 18 Liebherr mobile and crawler cranes on the site with lifting capacities ranging from 40 to 1200 tonnes. “Winning the order for the crane work at the Bernabéu was not only a routine job for us, but also a great challenge”, says Luis Aguilar, owner of Gruas Aguilar. “The logistics and planning required for all these cranes in all different sizes was enormous. From the compact LTC 1050-3.1 and LRT 1100-2.1 rough-terrain crane to the LTM 11200-9.1, there was a full team on the pitch”, adds Aguilar and continues: “Obviously, we were reliant on the usual competent, fast response from Liebherr-Iberica’s after-sales service team.”

The three-man formation consisting of an LR 1600/2 and an LR 1600/2-W from Gruas Aguilar, together with an LR 1800-1.0 from Eurogruas 2000, produced a strong performance. They were on site permanently from June to December 2020 carrying out a wide variety of hoisting work. The gigantic heavy girders for the roof structure, in particular, had to be hoisted into position.

The LR 1800-1.0 from Eurogruas 2000 impressed as a skilful playmaker. It was demonstrating all its strengths, as Javier Sato, co-owner of the Eurogruas 2000 Group explains: “High capacity, compact dimensions, low-cost logistics and flexible use – they were the features that resulted in us investing in the LR 1800-1.0. It was a very good decision for us and we are proud to have taken delivery of the very first machine at the Bauma in 2019.” The working conditions in the centre of the city immediately next to the arterial Paseo de la Castellana road were very complex due to the highly constricted space available, heavy loads and large radii. “We were completely reliant on the flexibility of the derrick ballast”, says Eurogruas 2000’s Project Manager, Jose Garcia and Juan Ayora. “The V-Frame enabled us to position loads weighing between 40 and 213 tonnes with a very wide range of radii safely and precisely without having to move the crane on the site.” The experienced crane contractor simulated every hoist in detail on a computer beforehand with the site team. Garcia and Ayora continue: “The teams from Liebherr-Iberica and Liebherr in Ehingen meant we had excellent, successful teamwork, particularly configuring the booms and planning the hoists.” 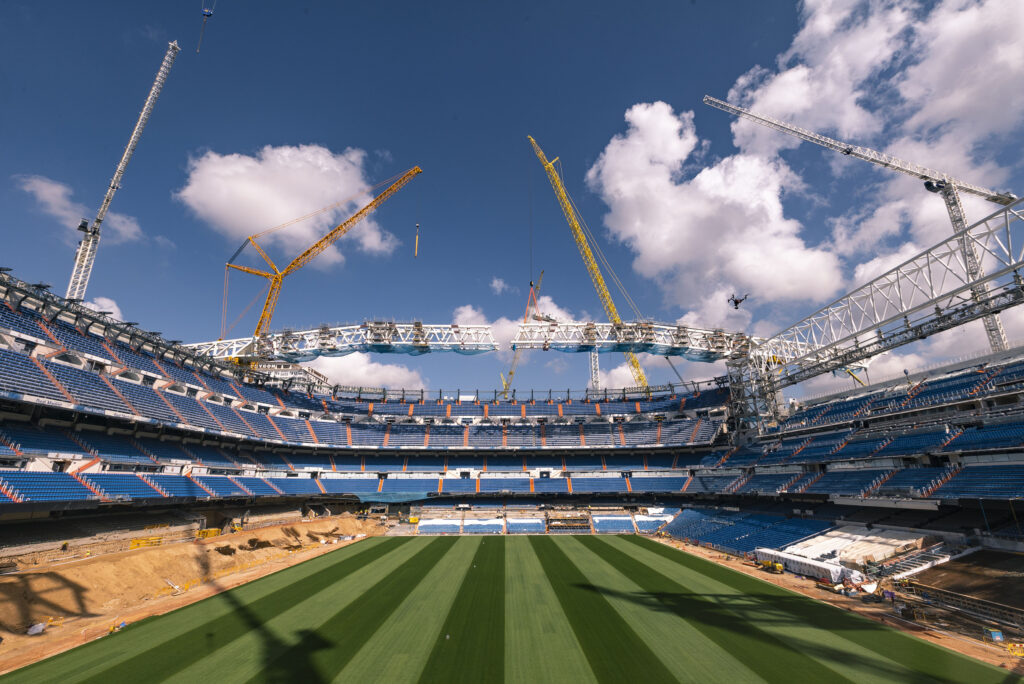 Safe installation – Gruas Aguilar and Eurogruas 2000 simulated the crawler cranes’ hoists in advance so that they could then position the massive girders for the new roof perfectly. 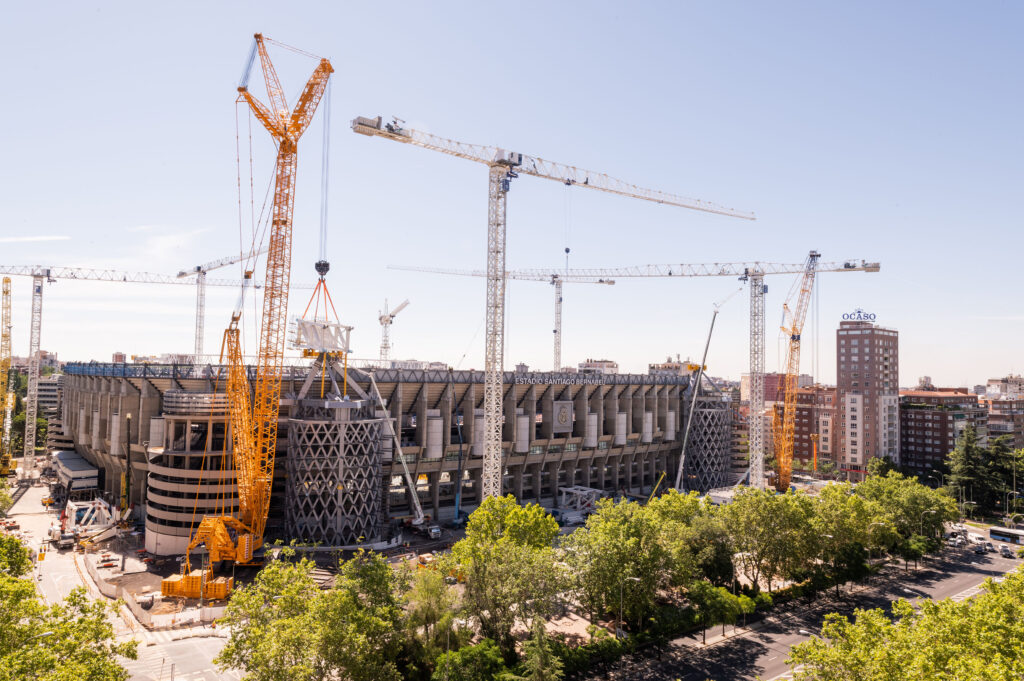 High lifting capacities, constricted site conditions and large radii – the LR 1800-1.0 from Eurogruas 2000 is perfect for the job at the Bernabéu Stadium in Madrid. 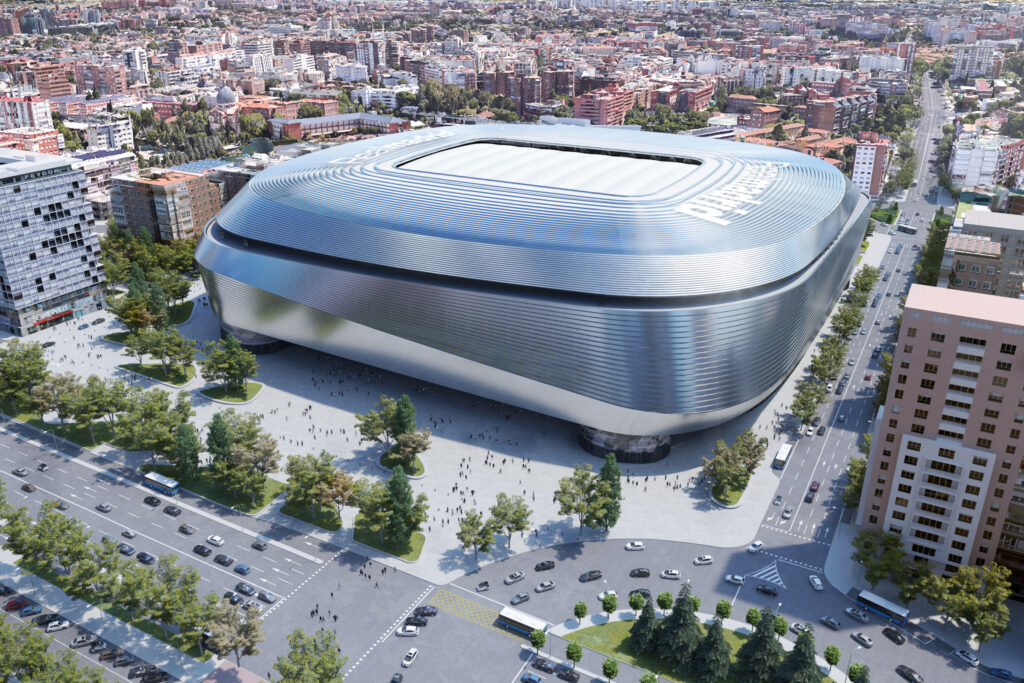 After it has been completed, the Bernabéu will be an ultramodern stadium with a hydraulically adjustable roof structure, lowering hybrid turf and new shopping, business and leisure facilities.

“At times we had 18 Liebherr cranes in action at the site. Obviously, we were reliant on the usual competent, fast response from Liebherr-Iberica’s after-sales service team,” says Luis Aguilar, owner of Gruas Aguilar.