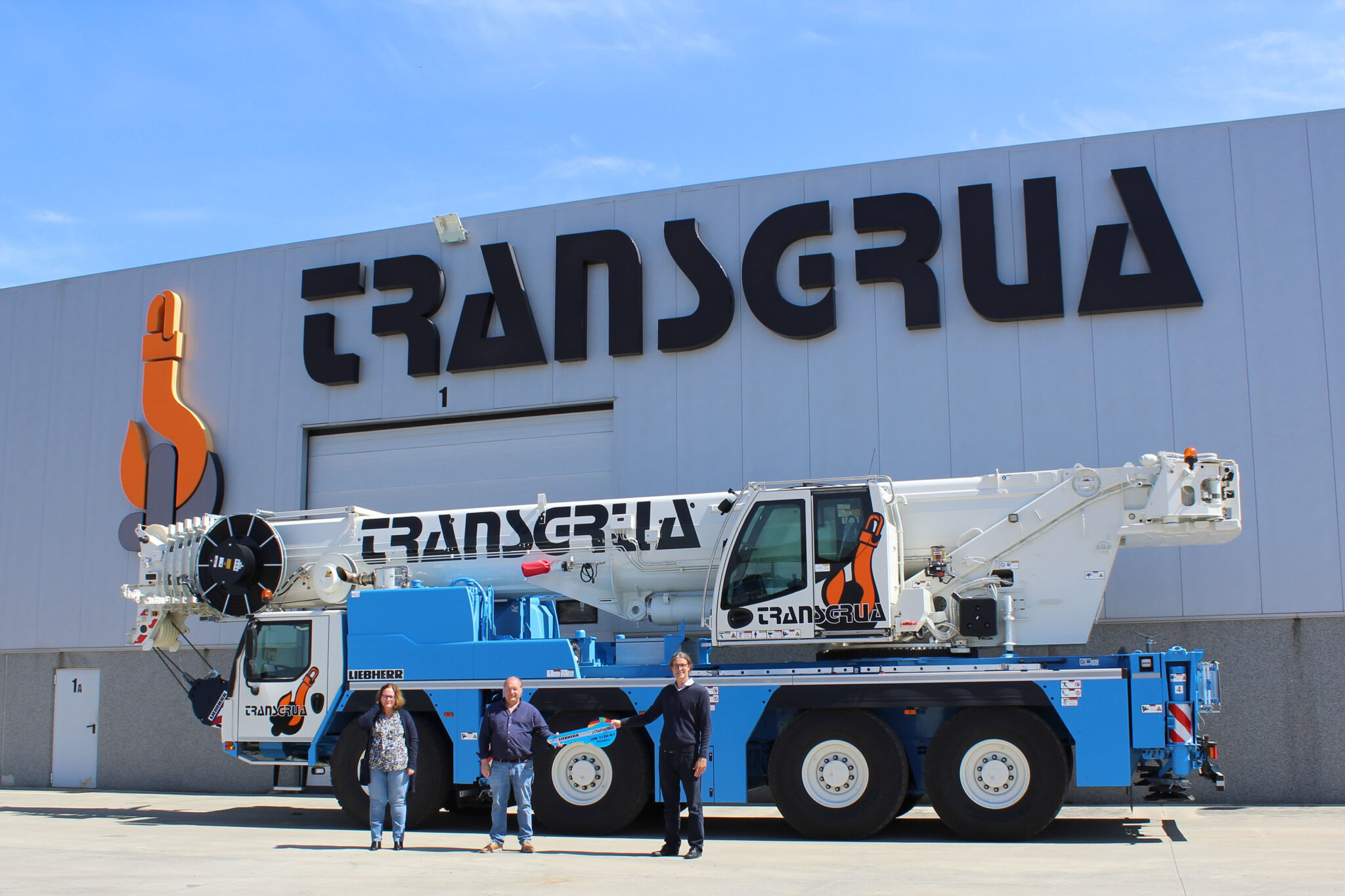 Sometimes getting to the site is one of the most difficult tasks of the job. Having a mobile crane with high lifting capacities and a long reach to work in narrow or hard-to-reach construction sites prompted Grúas Aguilar (Madrid), Quality Grúas (Barcelona) and Transgrua (Lisbon) to purchase the new Liebherr LTM 1120-4.1 mobile crane.

The prototype of the new Liebherr LTM 1120-4.1 mobile crane was presented to the industry at the past Conexpo in Las Vegas (USA) in March 2020. From the very first moment, this innovative crane aroused great interest among customers. In the meantime, series production has started and the new type of crane is being delivered worldwide. Grúas Aguilar (Madrid), Quality Grúas (Barcelona) and Transgrua (Lisbon) have simultaneously taken delivery of the first three units of the Liebherr LTM 1120-4.1 on the Iberian Peninsula.

As the most powerful four-axle all-terrain crane on the market, the LTM 1120-4.1 sets new standards in the 120-tonne class. It achieves a performance class that previously only five-axle cranes could offer and is equipped with the longest boom in its class of 66 metres. These features increase flexibility and save transport costs.

With the LTM 1120-4.1, Liebherr has introduced an innovative and powerful mobile crane to the market that meets the requirements of inner-city areas in particular, as the 4-axle crane enables operations in particularly confined spaces. In addition, it has an exceptional lifting capacity with the telescopic boom extended long. This powerful model is thus suitable for the assembly of antennas or tower cranes, among other things, and features the most innovative crane technology thanks to the VarioBase® and VarioBallast® systems developed by Liebherr.

Grúas Aguilar, Quality Grúas and Transgrua are unanimous about the usability of this crane model: the new crane is perfect for “work on construction sites and in industrial plants” and “in the assembly and disassembly of tower cranes, in the installation of air-conditioning systems, in work on cruise ships or in the loading of machinery”.

“With the LTM 1120-4.1, we at Grúas Aguilar can carry out work for which larger cranes were previously required and which was naturally more costly to use. The new compact 4-axle makes it easier for us to transport and access the construction site. We also appreciate the security that a brand like Liebherr offers us and the trust that has grown as a result of decades of good experience and excellent after-sales service,” says Luis Aguilar, owner of Grúas Aguilar.

In this sense, Mario Magdaleno, owner of Quality Grúas, also reports: “We want to make the LTM 1120-4.1 the flagship of our company. It will allow us to carry out projects that we have not been able to do before, and it will strengthen some of our areas, such as tower crane assembly”.

“For Transgrua, the acquisition of the Liebherr LTM 1120-4.1 meant the addition to our fleet of a versatile crane with an exceptional boom length, especially in combination with double folding jib. Thus, it will play a very important role for us in the field of assembly and disassembly of tower cranes. We have been buying Liebherr cranes for four years now because we are convinced not only of their innovative strength and quality, but also of the availability of the after-sales service handled by Liebherr Portugal and Liebherr Ibérica,” adds Henrique Lorenço of Transgrua.

Grúas Aguilar was founded in 1968 and has since been involved in thousands of projects throughout Spain, Portugal, France and Morocco. The crane and machinery fleet is constantly being renewed. 38 of the 57 cranes were manufactured by Liebherr. The objective is to always have the most modern, reliable and safe models on the market.

Grúas Aguilar provides services in a wide range of sectors, including infrastructure, construction, energy, cement, iron and steel, chemicals and the environment. For years, the company has relied on Liebherr cranes, the quality of the products and the efficient after-sales service.

Quality Grúas specializes in the rental of mobile cranes and heavy transport, always focusing on the best solution for the customer. The new machinery and qualified personnel make the Barcelona-based company, founded in 2011, an expert in the assembly of tower cranes, air conditioning systems and event technology. In addition, there are special solutions, for example for work in the high mountains or inside ships.

Transgrua was founded in 1973 as a transport and lifting services company. In addition to the head office in Lisbon, there are branches in the Algarve, Sines, Pombal and Porto, as well as internationally in Morocco and Angola. The company has a total of 370 employees and a fleet of 161 cranes up to 500 tonnes capacity.

The LTM 1120-4.1 cranes for Grúas Aguilar and Quality Grúas from Spain

Helaakoski decides to purchase used crane direct from the manufacturer