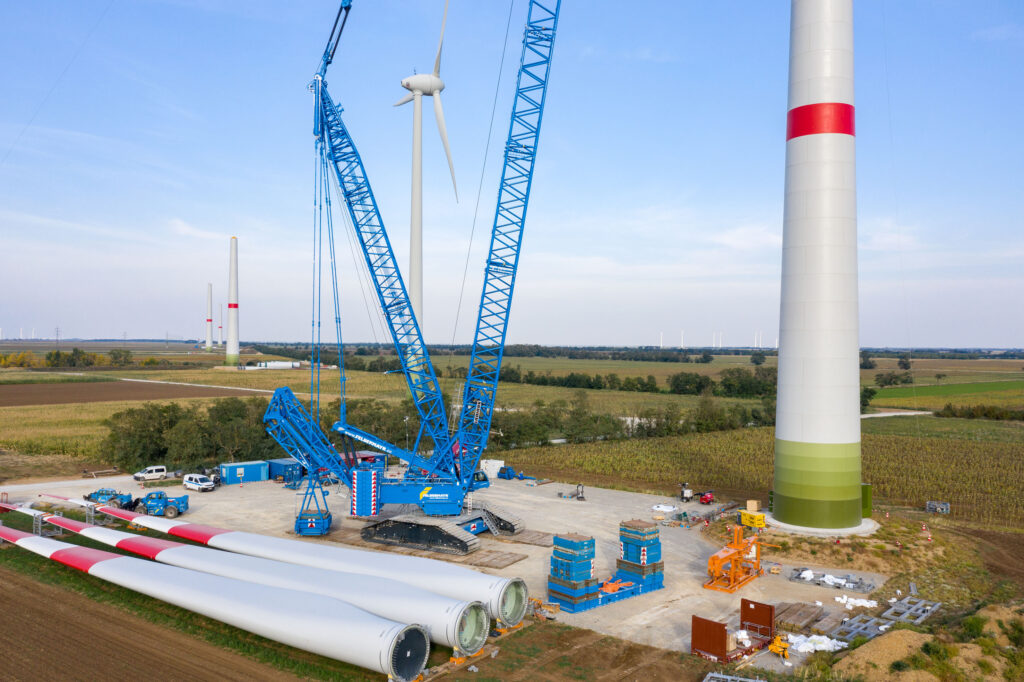 Compact, modern and powerful – Felbermayr’s new LR 11000 has a whole host of innovative features. VarioTray and V-Frame save the crane team a great deal of work on site.

A Liebherr LR 11000 crawler crane in its smart blue livery left the factory in Ehingen in early summer. Its destination – Austria. Its job – wind turbine erection. Its new owner – Felbermayr Holding GmbH. This was the third of these modern 1000t cranes bought by the family run business, which operates throughout Europe. The powerful crawler crane was supplied with all the latest features, including the VarioTray detachable suspended ballast and the V-Frame hydraulically adjustable folding frame. Felbermayr has already placed an order for another large Liebherr crane in the form of an LR 1800-1.0. This will be delivered shortly. 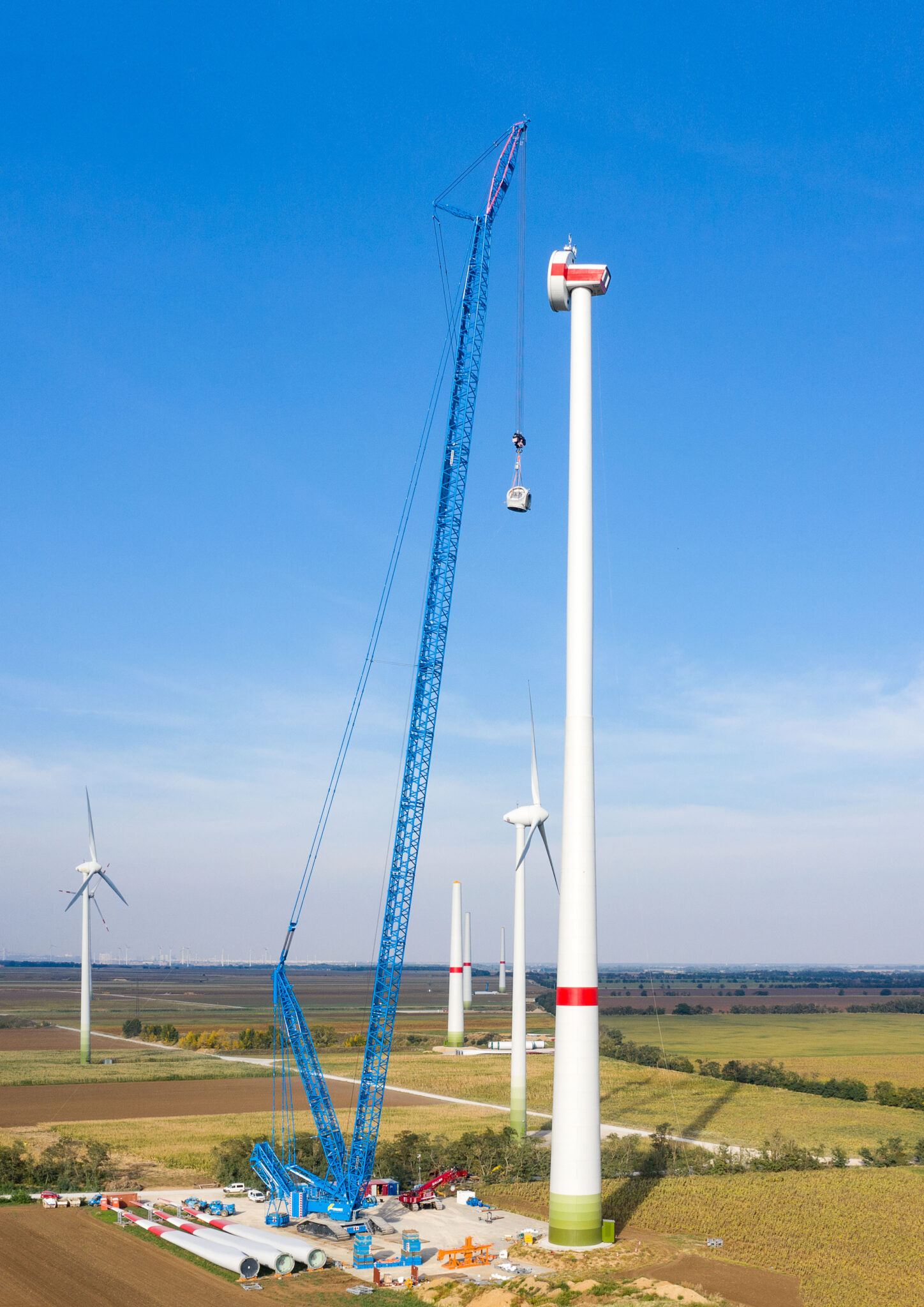 Upwards – the hub on the LR 11000’s hook goes up into the sky. The component is installed at an altitude of 160m. The three rotor blades are already waiting on the site.

Work is currently being carried out in Burgenland, Austria, on repowering an existing wind farm. Old, small wind turbines on the extensive fields on the border with Slovakia are being dismantled to make way for more modern systems. Felbermayr’s brand new Liebherr LR 11000 crawler crane has been working on the new, significantly more powerful wind turbines since July. A total of ten turbines with a rotor diameter of 138m and a rating of 4.2 megawatts is to be installed.

The brand new 1000 tonne crane features a 168m lattice boom, a derrick boom and an F2 jib, which is ideal for erection work in a wind farm – 15m long and slightly angled. It enables the topmost components of the wind turbines, with their massive hub heights of 160m, to be installed safely with adequate space to manoeuvre the various components.

The heaviest components, and therefore the largest load cases for the LR 11000, are the stator and rotor, which are assembled to make the generator. Installing these parts sees a gross load of around 88t on the crane hook. A total of 380t of central, suspended and slewing platform ballast ensure that the crawler crane has adequate stability when handling these loads, a hoist height of 160m and a required radius of around 32m. A further 450t of ballast is available on site. However, this reserve is only required to raise and lower the massive lattice boom and can be pinned to the suspended ballast pallet in just a few minutes.

When the weather plays ball, the crane team and assembly team can erect a wind turbine on the existing 85m tower in around four days. The LR 11000 is then dismantled and transported to the next site in the wind farm. Liebherr continually works on developing the handling procedures for setting up its crawler cranes, and this is clearly shown when relocating the 1000 tonne crawler crane – only around six days are required after installing the final rotor blade until the crawler crane is fully set off again and ready to start work at the new site.

The Liebherr LR 11000 has become an essential tool for Felbermayr both for jobs at wind farms and for work in industry. It is the most powerful lifting equipment in the company’s impressively large crane fleet. One of the very first of these cranes to be made was delivered to the Austrian group in summer 2014. In addition, the double “Power Boom”, which boosts lifting capacity, was also installed for the very first time on a blue LR 11000 operated by Felbermayr. At the time, a nacelle around 200t was hanging on the hook and the crawler crane managed to install what at the time was one of the largest rotor stars in the world with a diameter of 152m in a single hoist.

Heavy loads, mega transports, massive infrastructure and special projects – all these and more are part of the portfolio of the Felbermayr Group whose cranes and machines can often be seen in Austria with the striking blue livery. The company has expanded massively, above all in the states of Austria, over the last 30 years. Family-run Felbermayr now has a total of 72 sites in 19 countries around Europe. 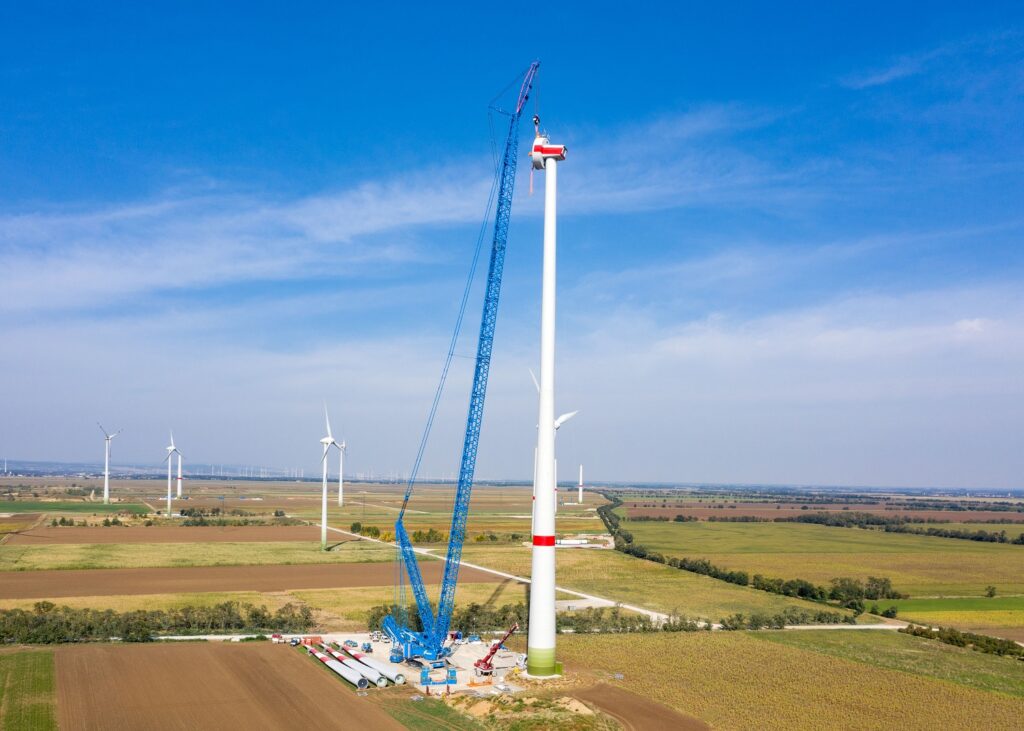 Well designed – the 15m lattice jib on the 168m boom makes for safe handling with the top components of the wind turbine during the assembly process. The photograph shows the installation of the hub.

The Rostock Giants Have Significant Place in Liebherr 2019 Report – Video