Fanger Kran AG is based in central Switzerland and recently replaced the flagship of its mobile crane fleet. A Liebherr LTM 1650-8.1 mobile crane is now available for the heaviest load cases of Fanger’s customers. The new state-of-the-art mobile crane replaces an LTM 1500-8.1 that had been in use “very reliably” at the broad-based company for around 20 years. 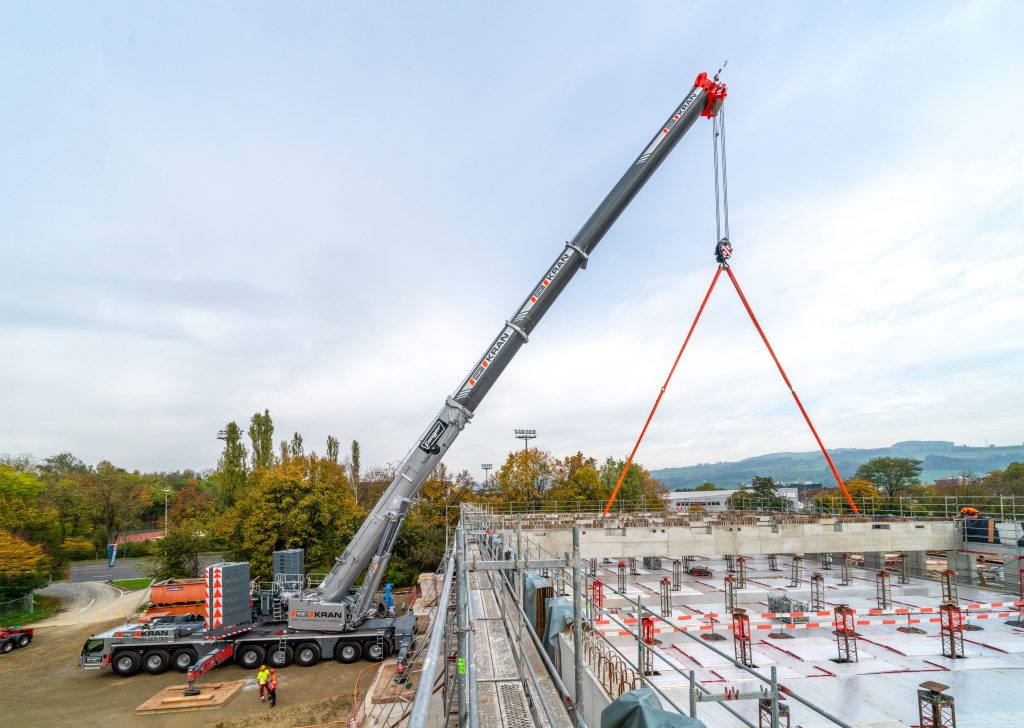 The acid test: on its first job, the LTM 1650-8.1 was tasked with placing almost 60 heavy concrete elements on the shell of a future gymnasium.

The brand new heavy-lifter from Fanger has been in use on Swiss construction sites for a few weeks now. The crane, painted silver-grey, had its baptism of fire during the construction of a new gymnasium in Sursee in the canton of Lucerne. Equipped with the T3 boom and 155 tonnes of counterweight, the new arrival was tasked with lifting several concrete trusses weighing almost 60 tonnes onto the building shell. This job was tailor-made for the powerful LTM 1650-8.1, which is packed with modern features, such as the freely adjustable distance of the slewing platform counterweight. Thanks to the option to set the counterweight radius to the minimum when taking on a load, it was possible to place the vehicle very close to the building, thus reducing the overhangs when installing the precast elements. Only when the elements were swivelled over the building was the radius hydraulically set to the maximum distance of 8.40 metres. This removed the need for twenty tonnes of counterweights, which therefore did not need to be transported to the construction site. 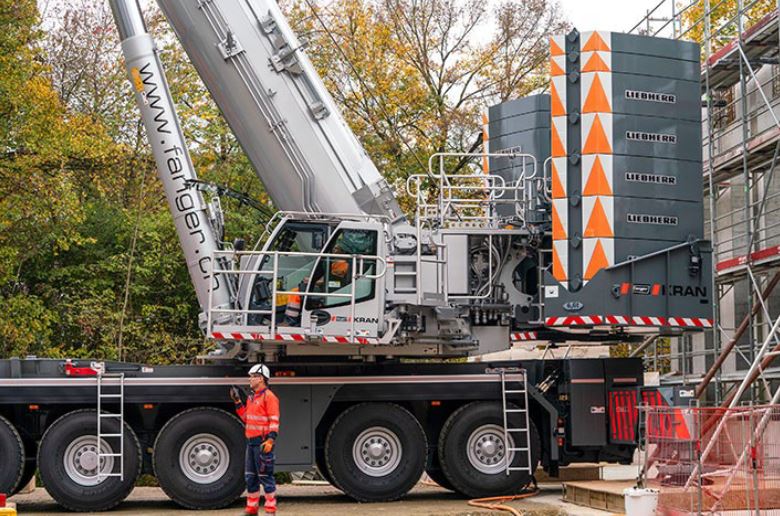 VarioBallast®: by setting the slewing platform counterweight to the minimum radius, it was possible to erect the mobile crane very close to the scaffolding. Only after swivelling was the counterweight radius increased to extend the load.

“We simply wanted the most powerful mobile crane on eight axles,” explains Stefan Fuchs, the responsible project manager at Fanger. “With the new mobile crane, we can now realise projects that were not previously possible. Due to its compact design, the LTM 1650-8.1 is already a sensational machine. With the same dimensions as its predecessor, it delivers a significantly higher lifting capacity,” says Fuchs. “In addition, we can reduce its total weight to 53 tonnes for road travel if necessary.” With this crane, the telescopic boom and the front outriggers can be removed quickly and easily using quick-release fasteners and transported separately. “This makes it even lighter than a normal 5-axle crane,” explains Stefan Fuchs. “This is crucial for us, because when driving in mountainous regions we often have limits in terms of the maximum weight of the vehicles. Also, all eight axles on the new crane are steerable.” 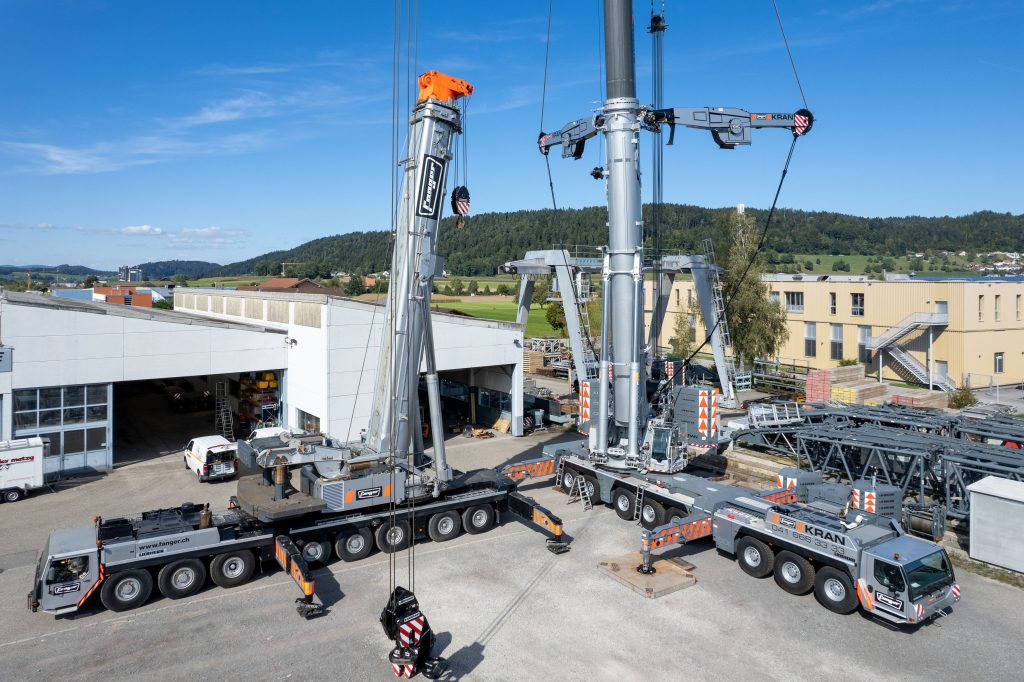 Replacement: the new arrival’s predecessor, an LTM 1500-8.1 (on the left in the picture) was still present at the handover of the crane at the Fanger works yard in Schötz. By the way, the first major repair on the now replaced Liebherr crane was a replacement of the luffing cylinders – after almost 20 years in operation.

With the acquisition of the heavy-duty LTM 1650-8.1, Fanger Kran AG, which operates a Liebherr LR 1750/2 crawler crane as well as a dozen mobile construction cranes, has strengthened its position in the crane business in Switzerland. “In general, the loads are getting heavier and heavier,” says Fuchs. “The new crane came at exactly the right time for us. Following the job building the new gymnasium in Sursee, the mobile crane will be used frequently at the construction materials plant that also bears the customer’s name. From the new machine’s cab, crane driver Daniel Heiz described his first experiences with the new acquisition – albeit with typical Swiss brevity: “Tip-top.” 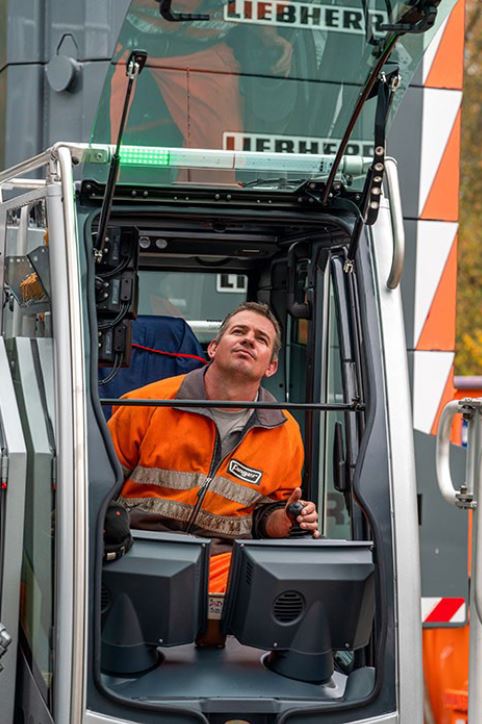 “Tip-top” … this was crane driver Daniel Heiz’s verdict during the crane’s maiden deployment.

Celebration of the inauguration: the newcomer ‘s arrival was duly celebrated at Fanger. The crane drivers, family members and Liebherr technicians were joined by company boss Fredy Fanger (second from right) and Marcel Hartl, Managing Director of Liebherr-Baumaschinen AG in Reiden (right).

Liebherr Add the LTR 1040 to their Telescopic Crawler Crane Range