AQS received the news that their newly built fish farm service vessel AQS Tor had broken loose from the deck of the Eemslift Hendrika during the storm of this week. Soon after this news they were notified that the coast guard vessel KV Sortland had tracked the AQS Tor and it was still afloat in the storm.

Early on Wednesday morning, the tugboat Stadt Sløvåg made its way out towards AQS Tor, which at that time was located approximately 27 nautical miles just west of Stadtlandet, drifting south at about 2 knots in the storm. That area was experiencing wave heights between 5m and 6m.

The tug reached the area and made contact with the coast guard vessel KV Sortland and both vessels had to wait for the weather to improve, but at least the situation looked favourable for saving the AQS Tor.

By 15.00 the AQS Tor was in tow of the Stadt Sløvåg bound for the port of Florø. The two vessels arrived safely just after midnight on Thursday morning.

AQS Tor has done surprisingly well considering the stormy conditions. When the deck-fastenings failed the vessel hit the cranes on the Eemslift Hendrika leaving some slightly depressed plates on the starboard side.

The future skipper of the AQS Tor, Svenn Magnus Steffensen. commented when first inspecting the vessel, “It looks surprisingly good, considering what the poor green boat has been through,”

Together with project manager Geir Bjørvik Johansen at Moen Marin AS, Steffensen he was in Florø on Thursday morning to inspect the damage to AQS Tor.

The most visible damage is the structural damage on the starboard side. This damage probably occurred when the boat was thrown off the deck and hit a crane boom.

At the stern on the port side, there is some damage, and the crane foundation on the starboard side has been hit.

Some seawater has entered the hydraulic chamber, but no more than 8-10 centimeters on the deck, after the deck above had been punctured.

We have not yet been able to examine the boat below the waterline. We will do that on Friday morning. Then divers have to come to check the boat,” says Steffensen.

He really thought the boat had gone down. He had followed the construction of AQS Tor as a member of the project group and has long known that he will sign on as one of two skippers. Therefore, it was something special to see that the freighter had a list and that AQS Tor fell off.

“I was sure that the boat had gone down, when I saw that it was missing on the cargo ship. It took about half an hour to an hour before I saw pictures of it floating. I did not believe what I saw,” says Svenn Magnus Steffensen.

“If there is no damage below the waterline, it is unbelievable how it has managed.”

The skipper was ready to muster on the boat this week, but now the plans are changed. The boat must now be carefully inspected, repaired and have new tests and approvals before it can be put into service.

General manager Ove Løfsnæs says that further plans for the boat will be made in collaboration between Moen, Gjensidige and AQS, on the basis of status on board and formal conditions such as insurance.

“We are pleased that the condition on board is good,” says Løfsnæs, praising Stadt Sjøtransport, Captain Roman Antons and his crew on the tug Stadt Sløvåg for their efforts to save AQS Tor.

“They have done a fantastic job and should have a big thank you for an excellent operation on the Stadthavet.

The Project Manager Geir Bjørvik Johansen at Moen Marin AS says that “considering the circumstances – it is a great relief to see that the boat is at the quay and is in such a condition.”

“The boat has of course been exposed to great forces as it has been ‘launched’ in a very special way and put out on a sea trial far beyond the normal. Considering the limited damage we have verified during the day, and the good seaworthiness the boat has, I am confident that the company will get a robust vessel that will serve them well for several years to come,” says Johansen.

He will also praise the efforts and expertise that has been exercised by the rescue service and rescue crews in the very dramatic situation outside Stadtlandet.

Geir Bjørvik Johansen: ”Thank you to everyone involved and not least AQS who have been optimistic and positive throughout the process, says. 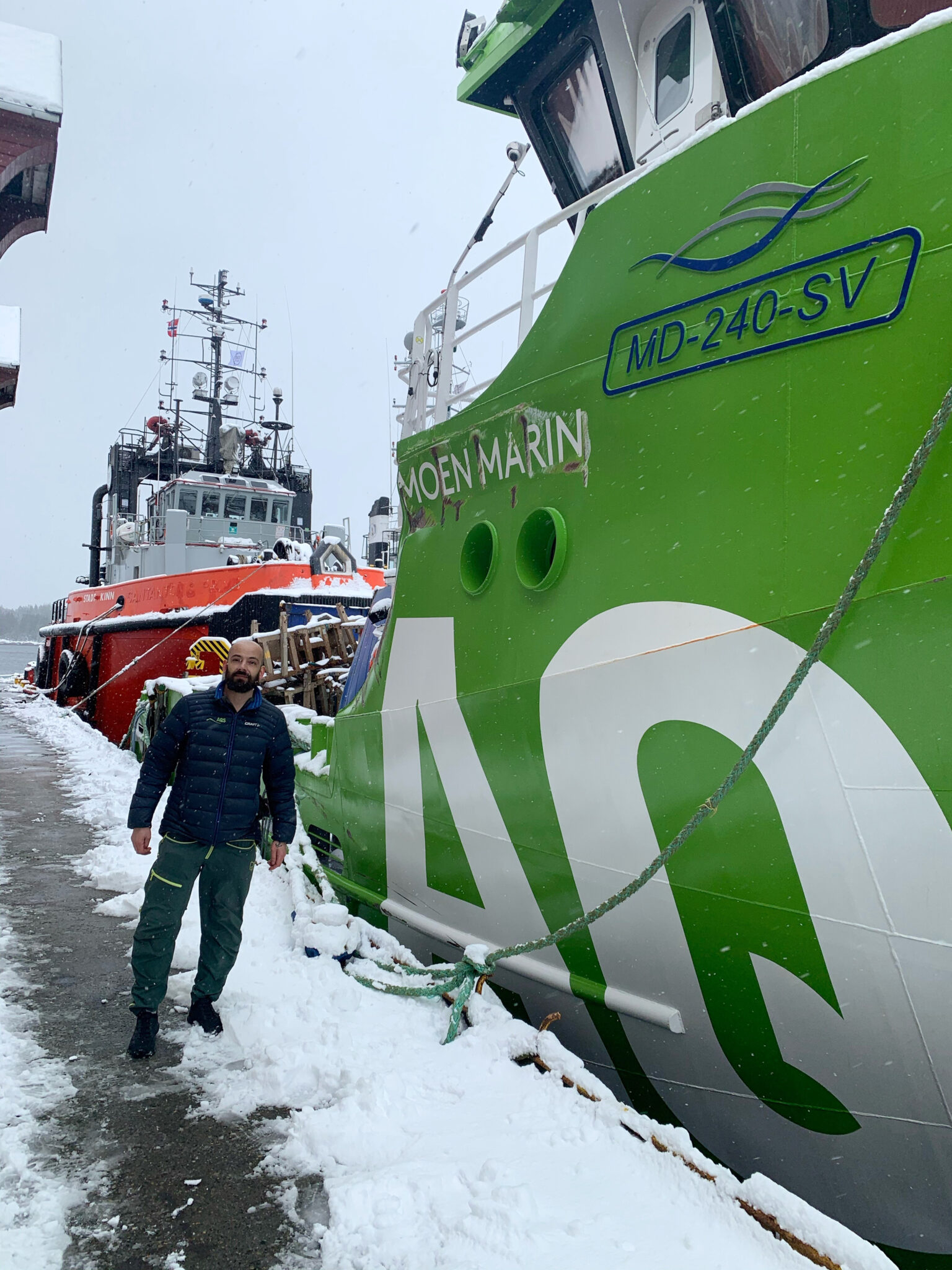 Svenn Magnus Steffensen at starboard side of AQS Tor

Video of the vessel adrift before the tow