Mammoet, the global market leader in engineered heavy lifting and transport, has successfully completed its role in the construction of Ain Dubai, the world’s tallest observation wheel. Developed by Meraas, Ain Dubai sits on Bluewaters in the heart of Dubai and once operational, it will provide residents and visitors extensive views of the iconic city of Dubai and its shoreline.

In 2014 Hyundai Engineering & Construction (HDEC), the main contractor on the project, awarded Mammoet the heavy lifting contract to install the key structural elements of the wheel. Being involved in the early phase of the project enabled Mammoet to present an installation method that delivered greater efficiency, safety and cost-effectiveness. They proposed installing the largest elements, the legs and spindle, directly from the barge they arrived on onto foundations with two of their super heavy lift cranes. This eliminated the need for temporary storage, multiple barge transports and working at extreme heights.

“Having been involved in the construction of many of the UAE’s iconic landmarks, such as Burj Al Arab and its expansion, Dubai Metro, Dubai Mall, and the luxury Five Star Viceroy Hotel on Palm Jumeirah island, we are pleased to add another one to our successes in the Middle East. Working on Ain Dubai alongside our valuable client HDEC is an honour and a privilege. Engineering capabilities, operational excellence and the remarkable cooperation of the entire project team ensured that the project was delivered successfully and incident-free,” said Michel Bunnik, Commercial Director, Mammoet Middle East and Africa.

“I have no doubt that Ain Dubai will earn its place among the world’s most famous landmarks, setting a new precedent in the tourism industry and making Dubai a ‘first choice’ destination for the international leisure and business traveller. We are committed to supporting Dubai’s ambitions to strengthen its position as a global city and business hub of the Middle East,” he added. 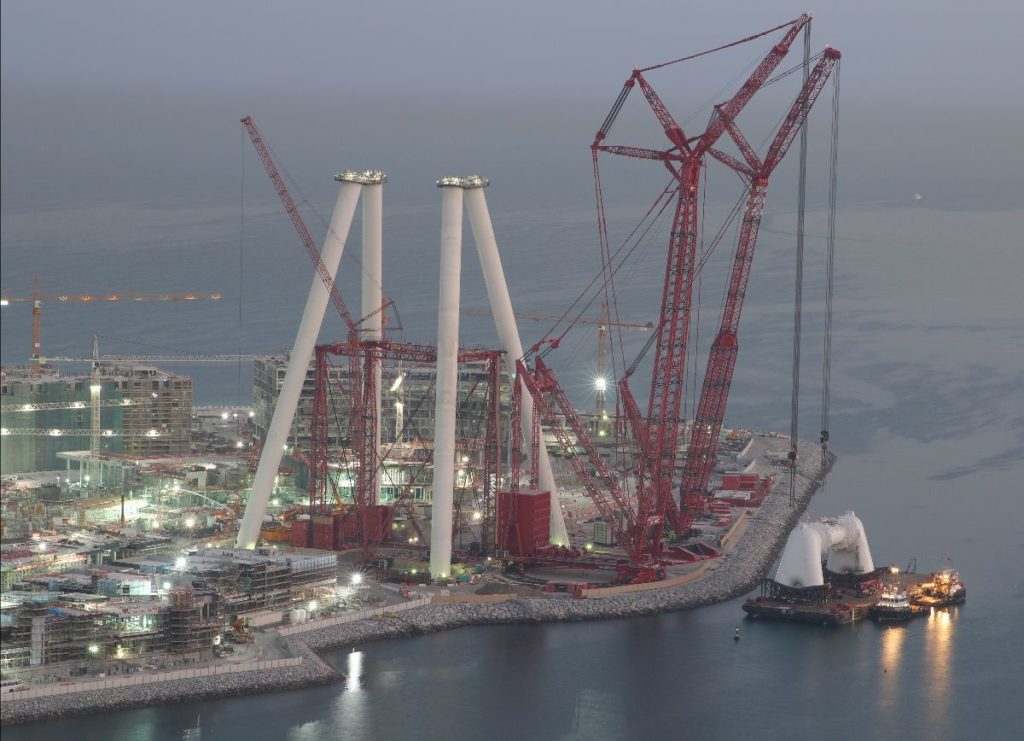 In 2016 Mammoet successfully positioned Ain Dubai’s four legs onto their foundations and lifted the spindle. Working closely with their client in the planning phase, Mammoet proposed the safest and most efficient method would be to install each component in one piece. Therefore, the legs and the spindle were prefabricated offsite by others before being transported by barge to the installation site. This delivered multiple timesaving and safety benefits. It reduced the number of barge trips required and each component was built safely at ground level before being lifted into place, eliminating the risks of working at heights.

Each 890-ton leg measured 126 meters long and 6.5 meters in diameter. They were rolled onto Mammoet’s barge using 40 axle lines of SPMT at the fabrication yard in Abu-Dhabi. Once on the barge, the legs were securely floated to the site. For the installation, Mammoet paired the world’s biggest crane –PTC200-DS–a 5000-ton ring crane, with a 3000-ton crawler crane. Together they ensured the stability and flexibility required to lift each leg and the spindle from the barge into position, whilst working 137 meters above the ground. 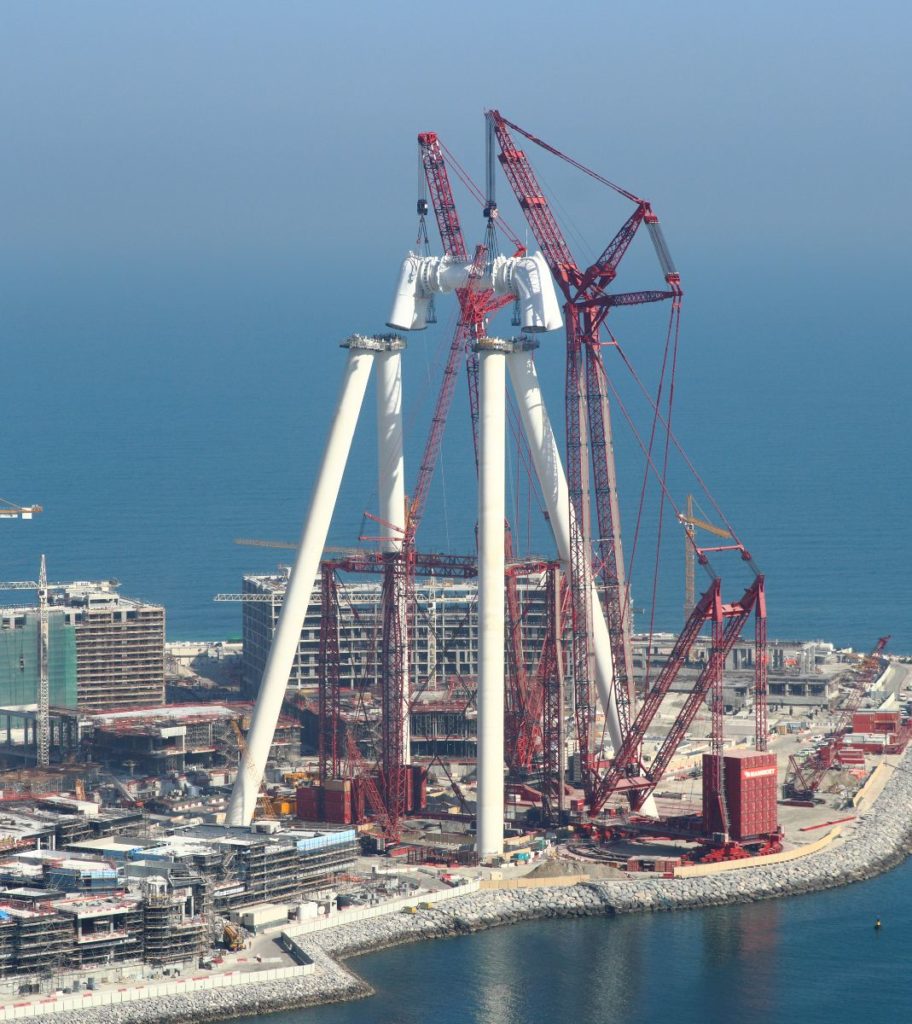 Subsequently, Mammoet set a world record by lifting the 1,900-ton spindle to sit on top of the four legs: it was the heaviest and highest tandem lift ever undertaken worldwide.

Following the positioning of the legs and the spindle, Mammoet lifted eight rim pieces and temporary spokes. The 3000-ton crawler crane was the only crane capable of carrying out these lifts. Its high capacity combined with its long lift radius could meet the distance between the barge and the installation point and lift each 700-ton section in one motion, without the need to set them down or reconfigure the crane.

Over a period of three and a half months, Mammoet supported the removal of the temporary spokes until all eight temporary spokes were disconnected from the wheel. Each 112-meter long spoke, weighing 470 tons, was skilfully lifted off the structure in tandem by Mammoet’s 600-ton and 400-ton crawler cranes.