The cargo contained 45 oversized heavy lift (OSHL) components and was shipped simultaneously on the 4,500 nautical mile voyage with two full-charter vessels from Masan, South Korea via Tiksi in the Arctic Ocean. From Tiksi on to Ust-Kut, Russia on the Lena River, a journey on the river of 2,300 miles or 3,701km.

The project was executed in close cooperation between deugro (Japan) Co., Ltd., deugro Projects, LLC, Russia and deugro (Korea) Co., Ltd. Due to the transport via the Northern Sea Route and critical conditions of navigation on the Lena River, the navigation period was limited to a maximum of three months. The vessels were accompanied by the nuclear ice breaker Yamal.

The first joint study with the client took place in 2016, whereby deugro prepared a survey and supported the project owner in determining the right location for the construction of the jetty on the Lena River. In close cooperation with the client, several road surveys were conducted to transport the 45 OSHL pieces from the Port of Tiksi via the Lena River to the project site in Ust-Kut.

The 45 pieces included a reactor with dimensions of:

and an ethylene fractionator with dimensions of:

To ensure smooth cargo operations, all method statements for loading, unloading, stowing and securing, as well as transportation, were reviewed by dteq Transport Engineering Solutions, a company of the deugro group.

As most of the OSHL cargo came from South Korea and the transit time to Tiksi via the Bering Strait was the fastest, it was consolidated and loaded at the port of Masan. To avoid any unnecessary double handling of the cargo and to save costs, a considerable part of the OSHL cargo from China and Japan was loaded onto the same vessel to Masan, which had already been chartered.

After 4,500 nautical miles, both vessels arrived at the anchorage points in Tiksi. Due to a low draft at the Port of Tiksi, the simultaneous transshipment from both vessels onto nine barges was executed outside the port area. All barges were certified for an exit to the sea, and the river transportation from Tiksi to Ust-Kut took about 24 to 26 days by barge.

“With a large number of rifts, where depths can merely be 115 to 130 centimeters during mid-August to mid-September, the most challenging part of the river was at Peleduy, Ust-Kut. Therefore, the main objective was to carry out the movement of the barges through the rapids section of the river and to deliver all of them to Ust-Kut before a possible falling of the water level,” said Pavel Sinitsyn, Project Manager, deugro Projects, LLC, Russia.

The unloading operations from the barges took place at the Ust-Kut jetty, which was designed and built by the owner in accordance with the technical solutions from deugro.

Accompanied by escort cars and cars of the traffic police, daily convoys transported the cargo on the Viluy federal highway and a separate road, which was built especially for this purpose in compliance with the technical requirements and under the control of deugro, to the construction site 9km away.

Due to the extraordinary dimensions and weights of the fractionator and the reactor , basic parameters such as the turning radius of the axial lines on curves, the height of upper constructions, the longitudinal slope of the road or the axle loading weight had to be considered to ensure smooth road transportation.

“Considering the scope of the whole project and the high number of interfaces, barge voyages and overland trips, preparation, timing, coordination and teamwork were key to successful project delivery. Teamwork and the full support of the client, project owner and all subcontractors made this great project a success even during the COVID-19 pandemic,” said Eun-Hee Jeong, Director, deugro (Japan) Co., Ltd.

“It took a great deal of time for planning and required the concentration of the best effort of all concerned parties until the completion of this project. The best collaboration brought this successful result, which has been recorded as the one of the biggest shipments that has ever made its way up the Lena River to the Irkutsk region, and the first transportation for Toyo through the Northern Sea Route,” said Jung-Ah Kang, Lead transportation coordinator, Toyo Engineering Corporation.

Loading Operation at the Port of Masan, South Korea (1)

Video Link after the Gallery 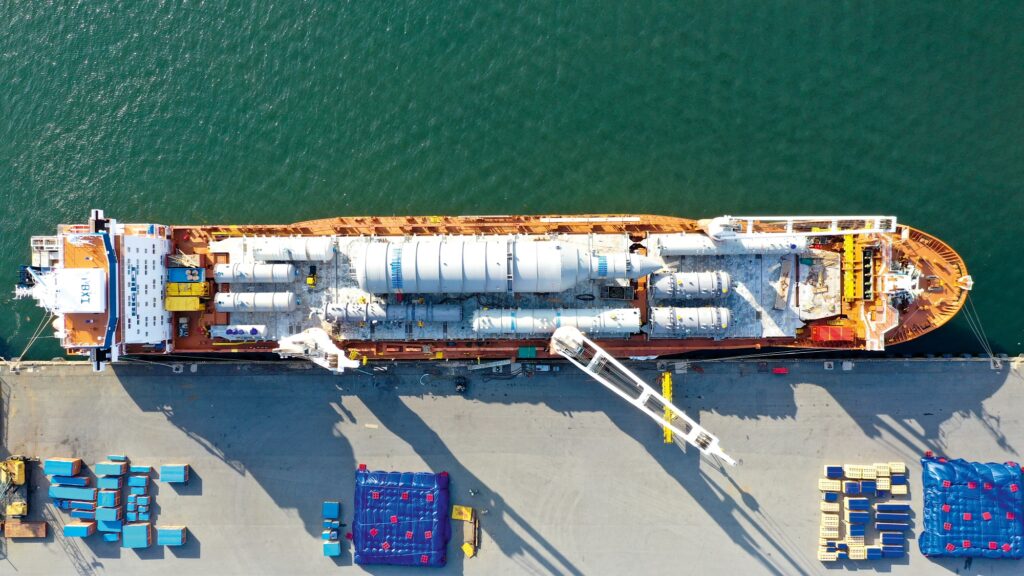 Loading Operation at the Port of Masan, South Korea (2) 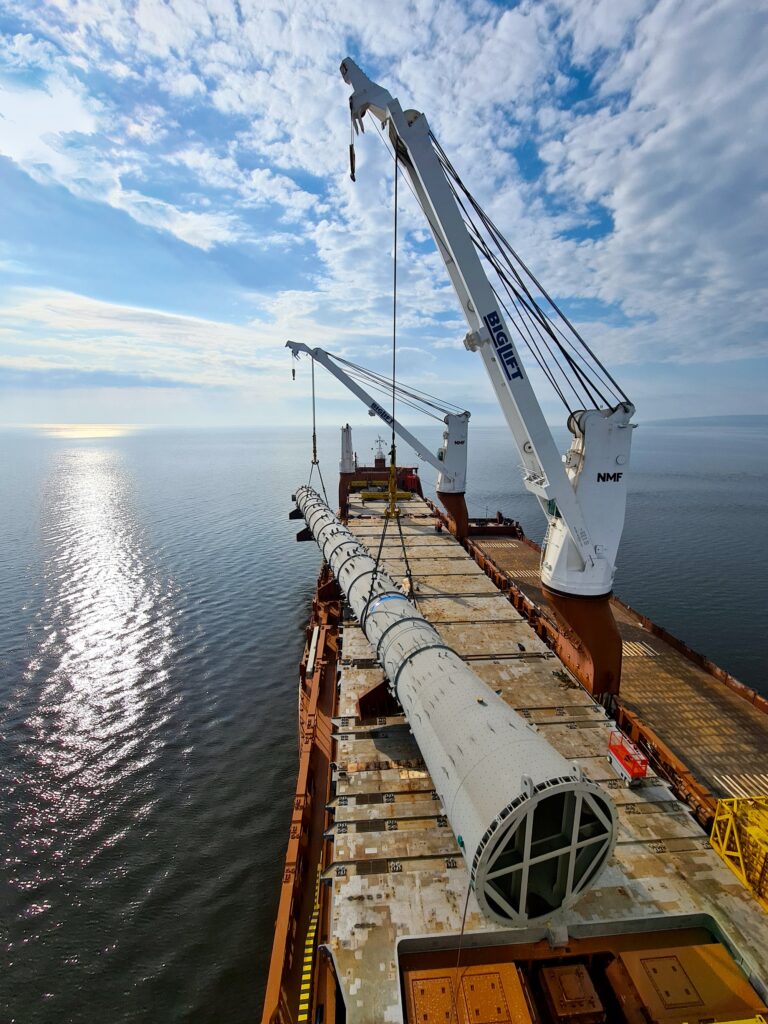 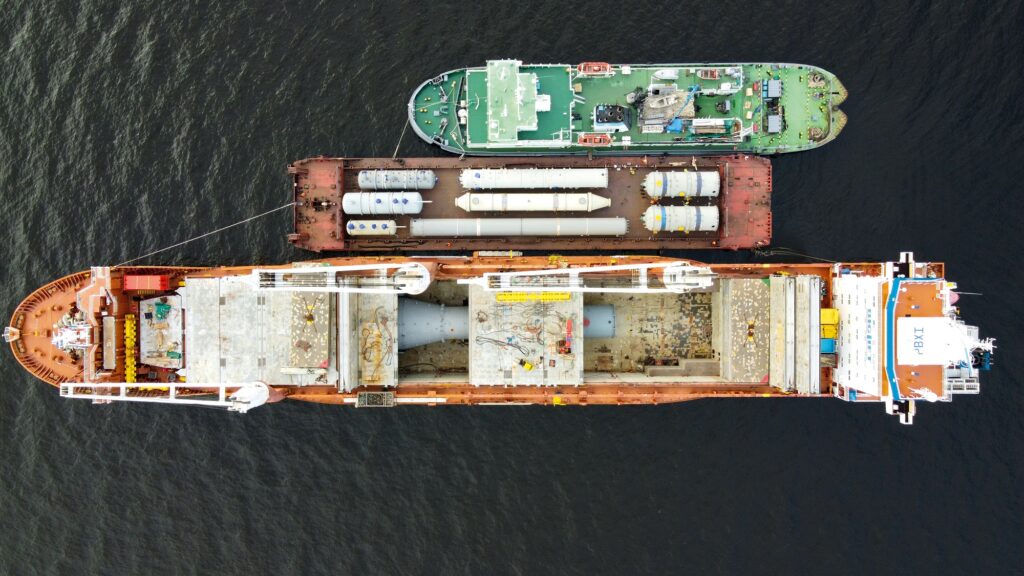 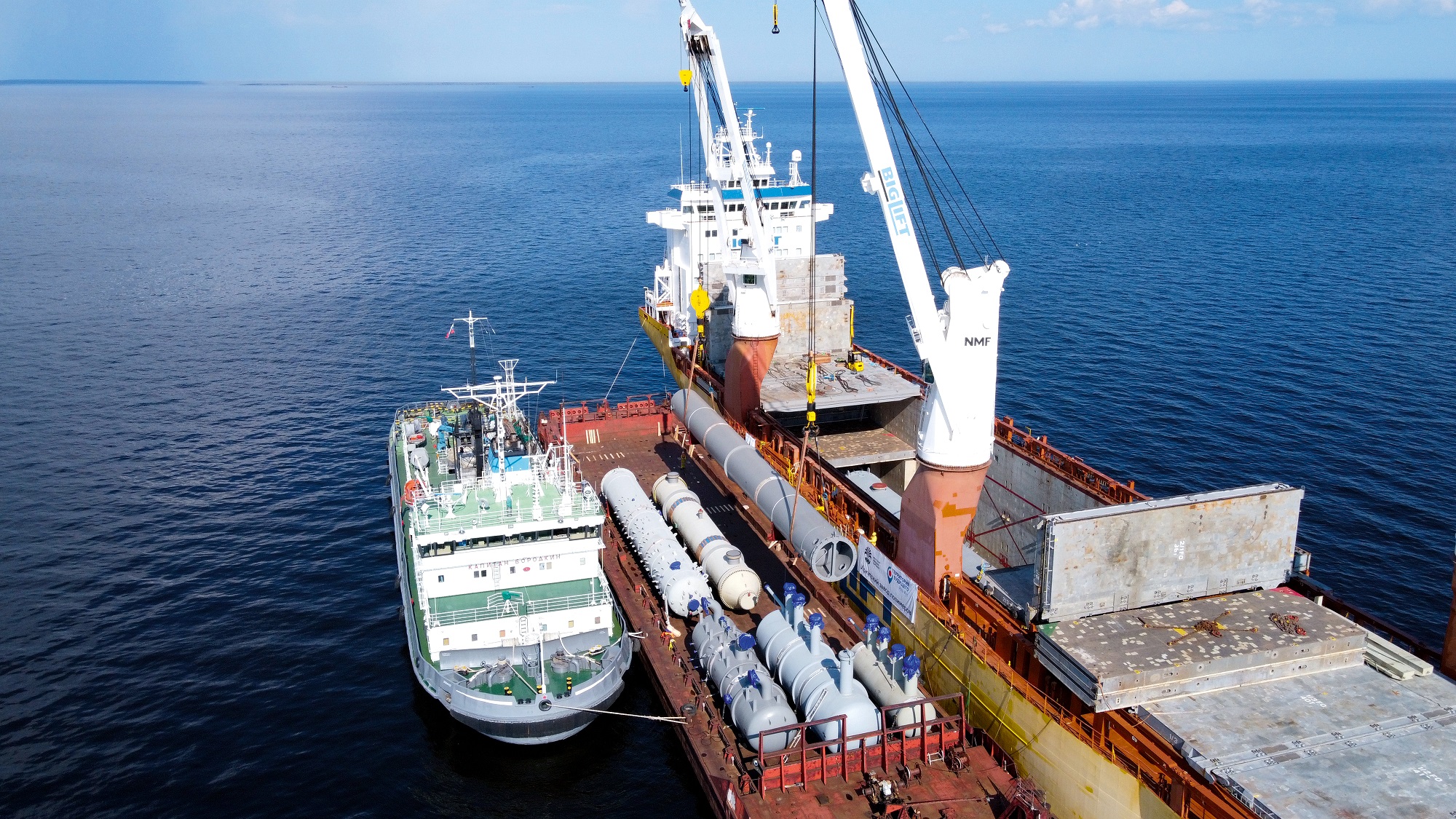 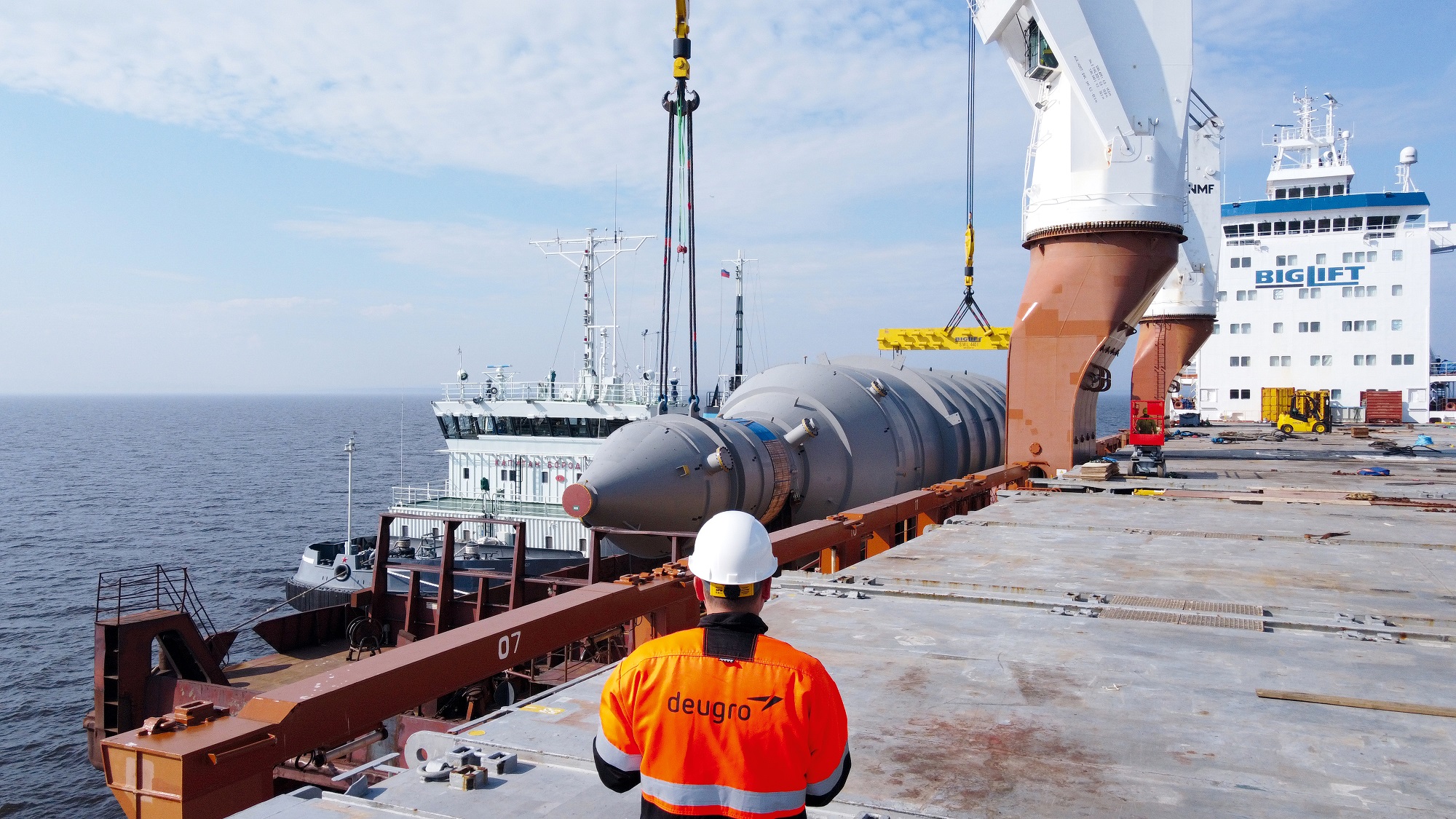 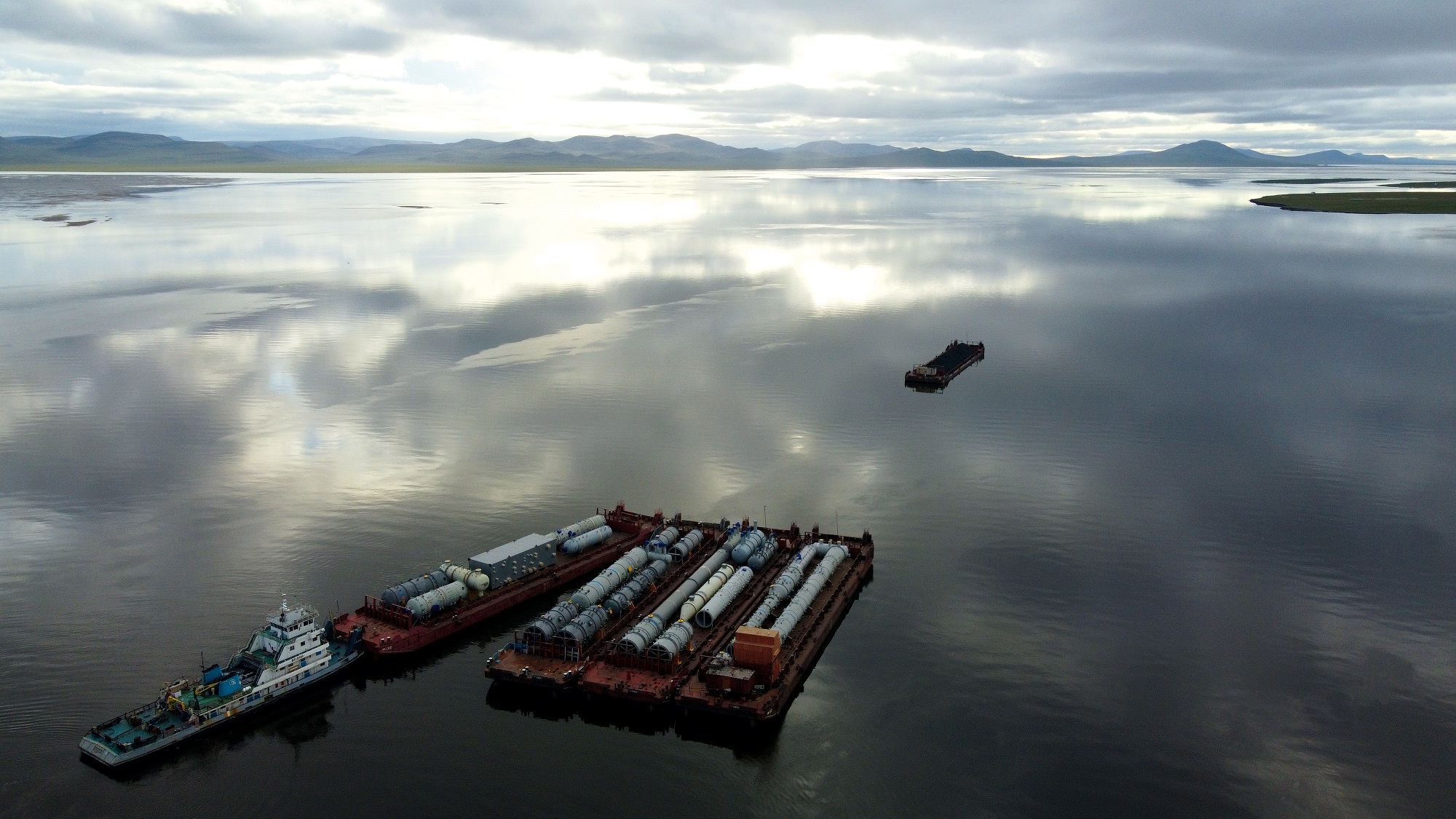 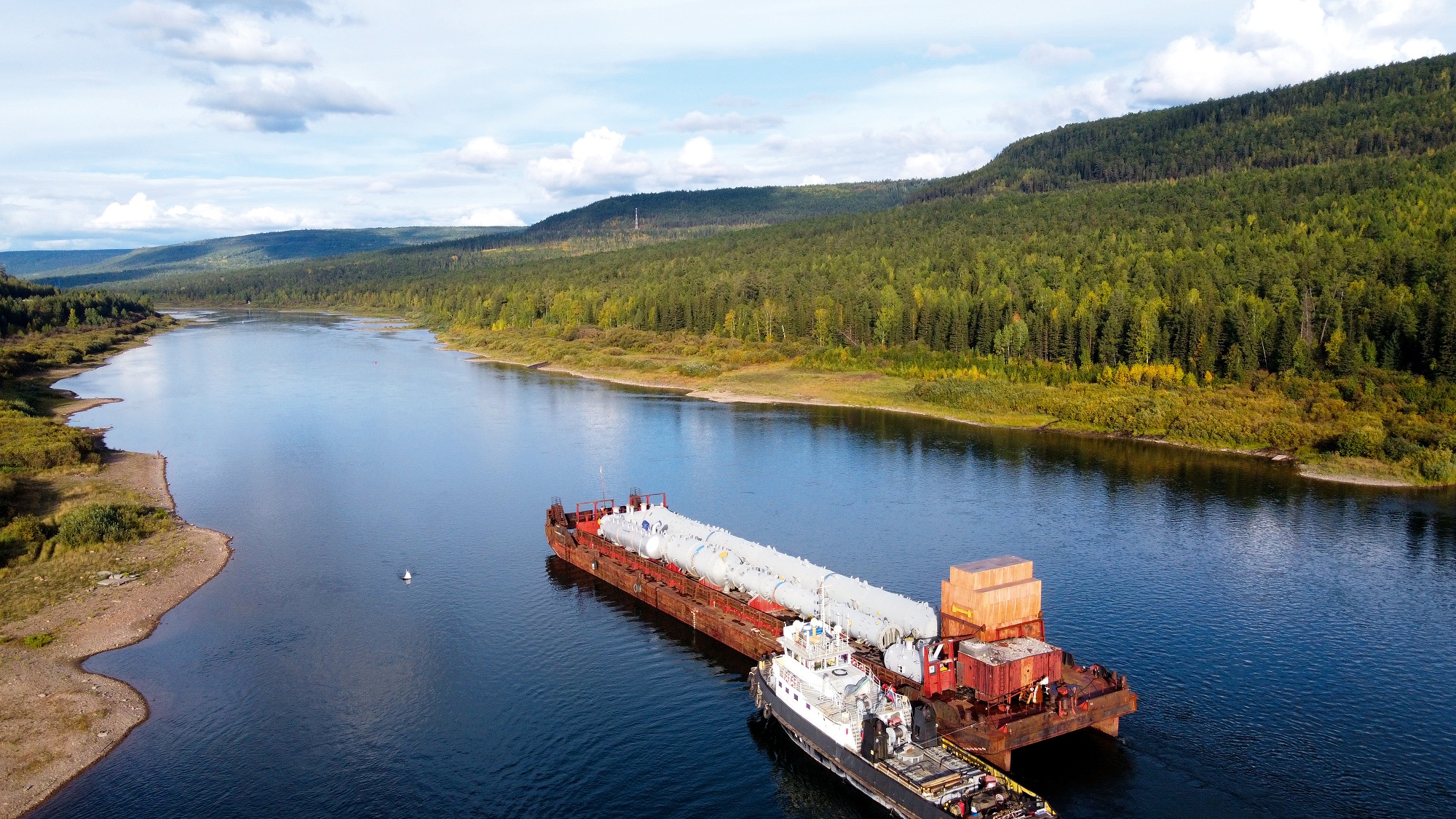 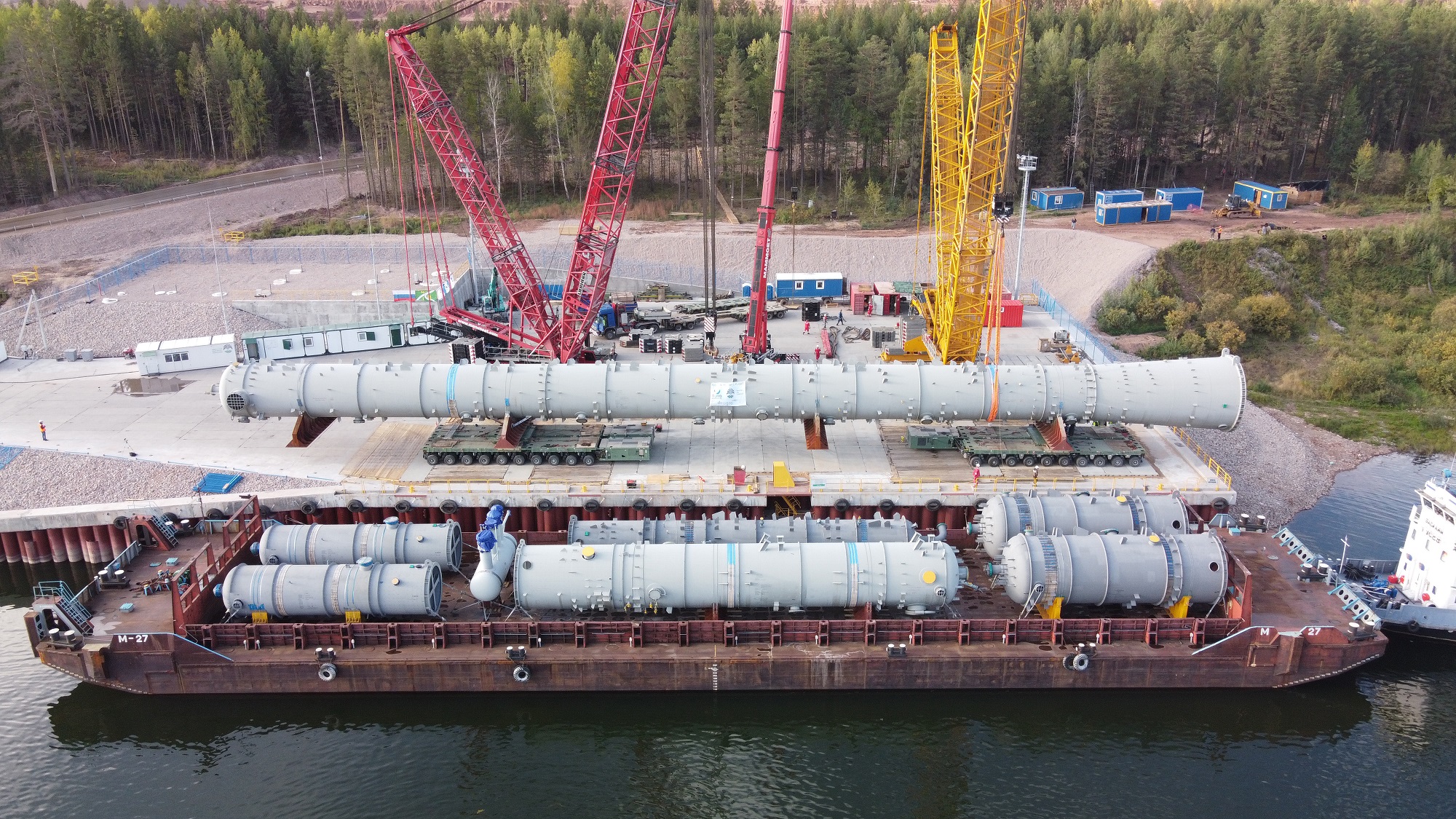 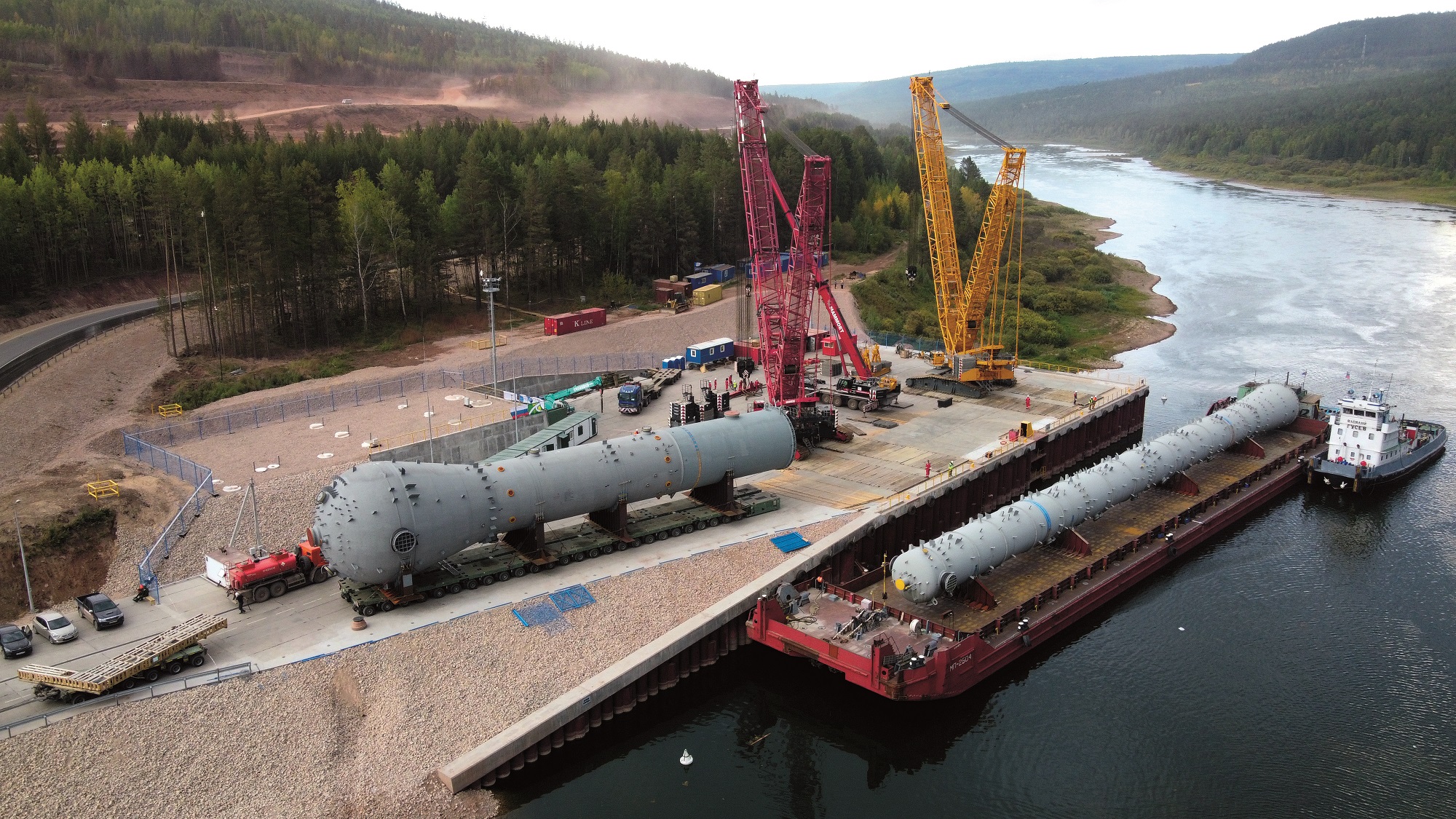 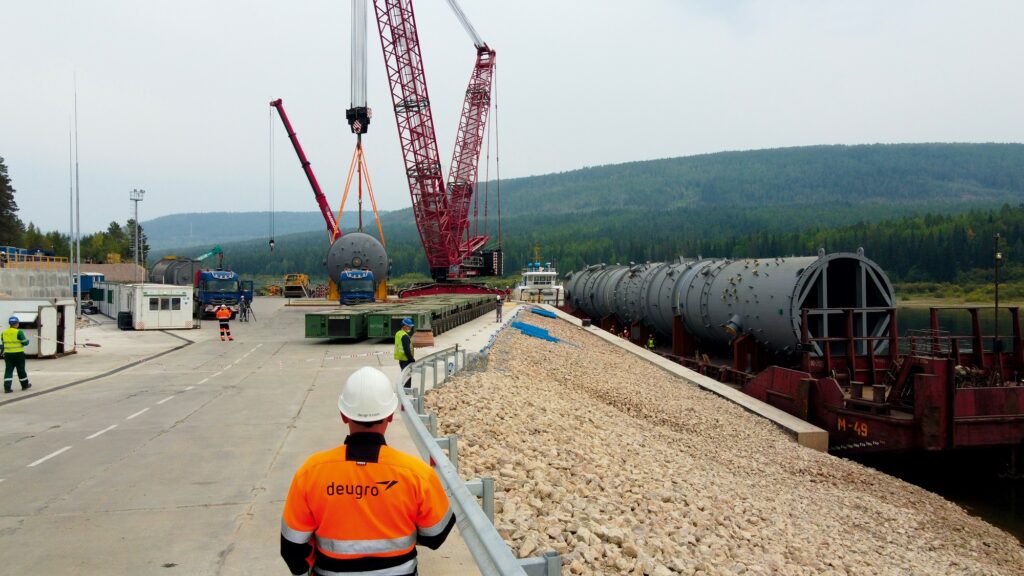 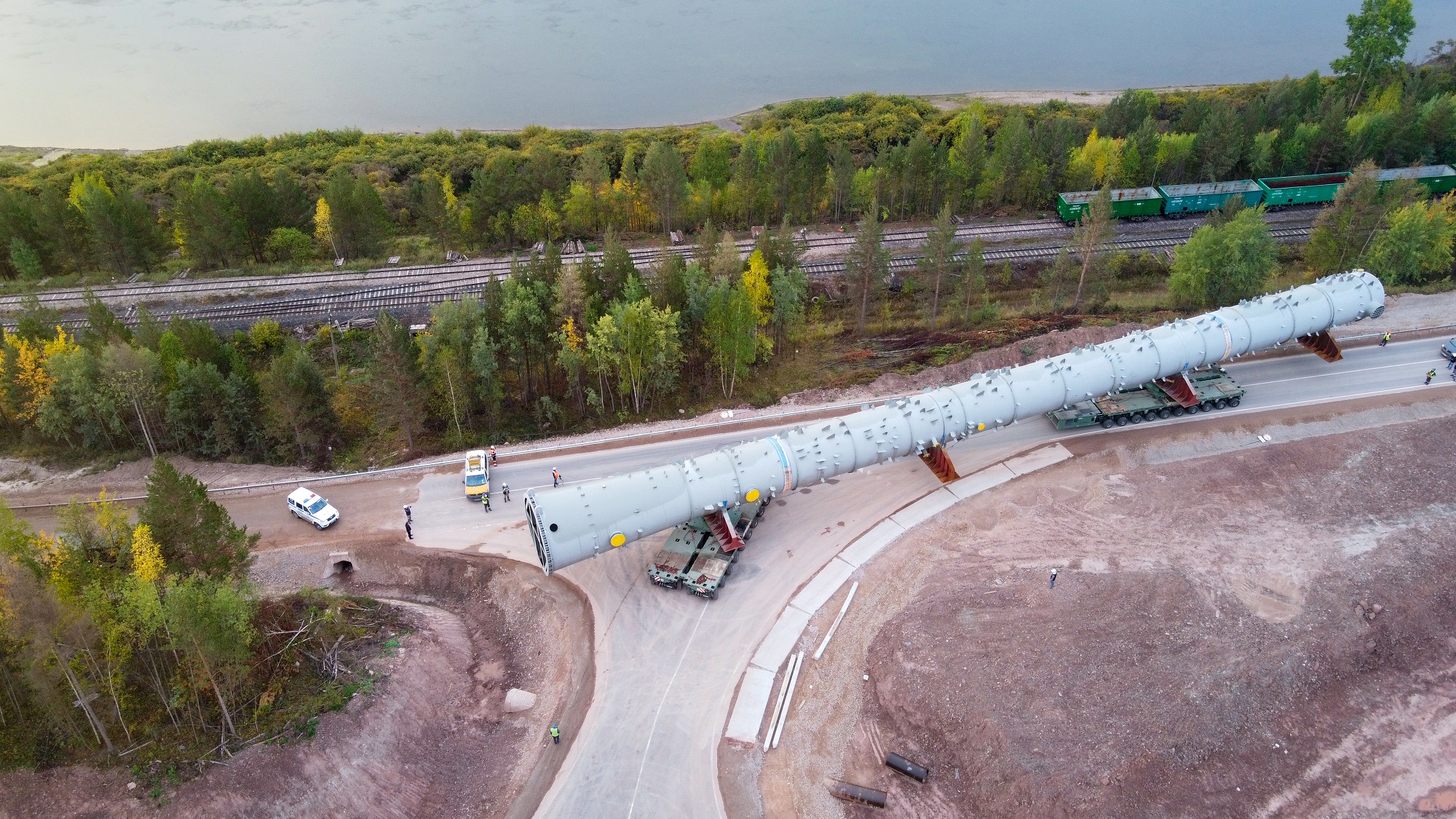 357t fractionator on the road to the construction site 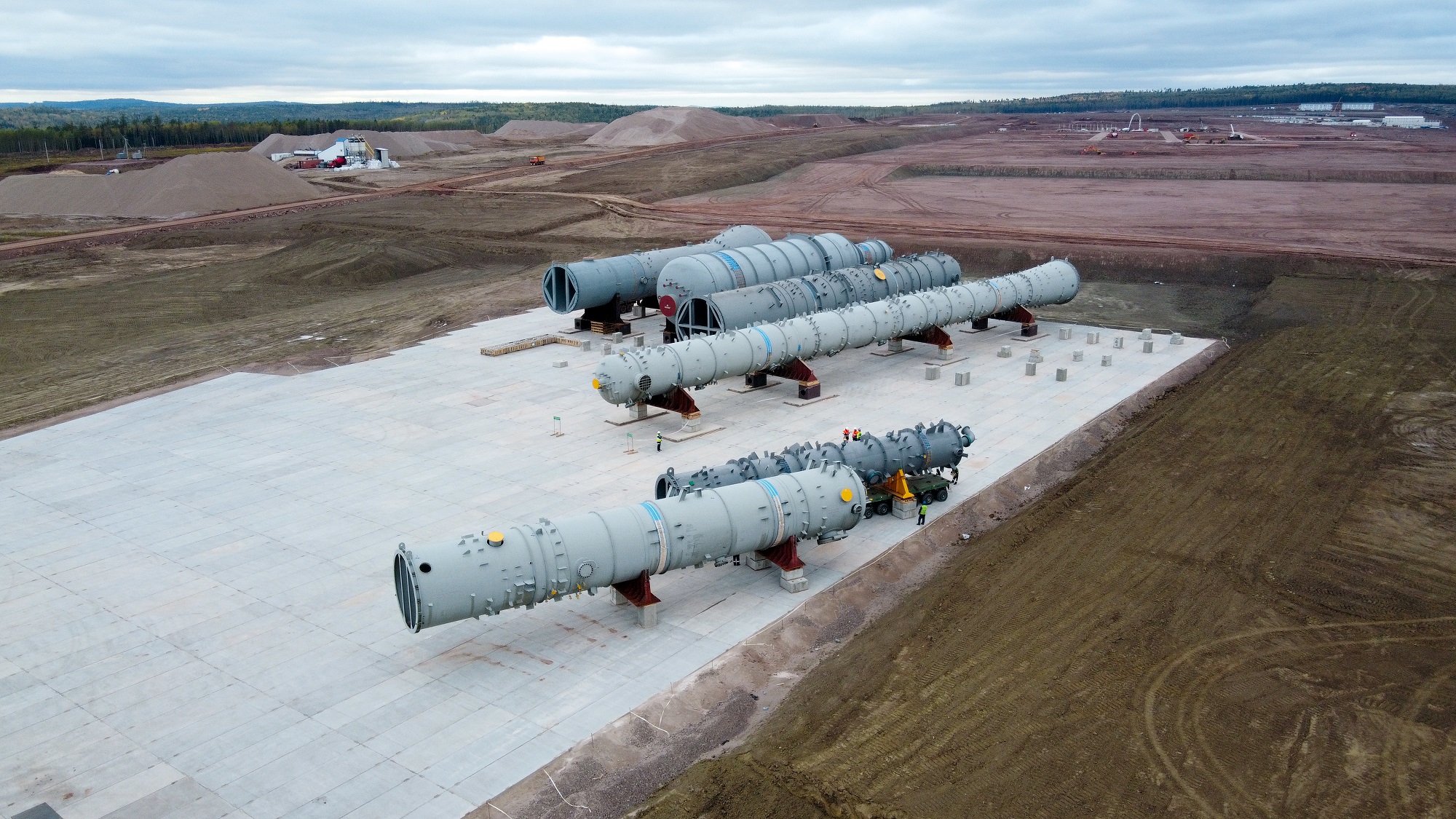 Marshalling at the construction site