The C6 column, lights tower and primary fractionator were received by trailer alongside the general cargo vessel in Ulsan. Coordinated by deugro and under supervision of the surveyor, the direct loading operation onto the vessel was executed in tandem lift using the vessel’s cranes with a combined lifting capacity of up to 800t.

Due to the sensitivity of the cargo units and their extraordinary dimensions, customized engineering solutions and professional project management were required.

After the 967t of industrial cargo were loaded, lashed, and secured, the vessel set sail to the Port of Houston according to schedule and arrived punctually at Houston City Docks after 9,641 nautical miles.

After arrival at Houston City Docks, the barge was brought alongside the vessel and secured in place. Two tugboats were used to assist the barge in staying in a specified offloading position during the discharge operation, while the cargo was slowly lifted off the vessel. Ballasting was used to maintain the vessel’s stability. During this step, multiple clearance checks were made as part of the safety protocol.

The 91.9m and 485t C6 column was lifted directly onto stools on the deck barge by the vessel’s cranes in tandem lift. Once the final position was approved by deugro, cranes slowly released the cargo until it was safely in place and ready for securing and inspection. 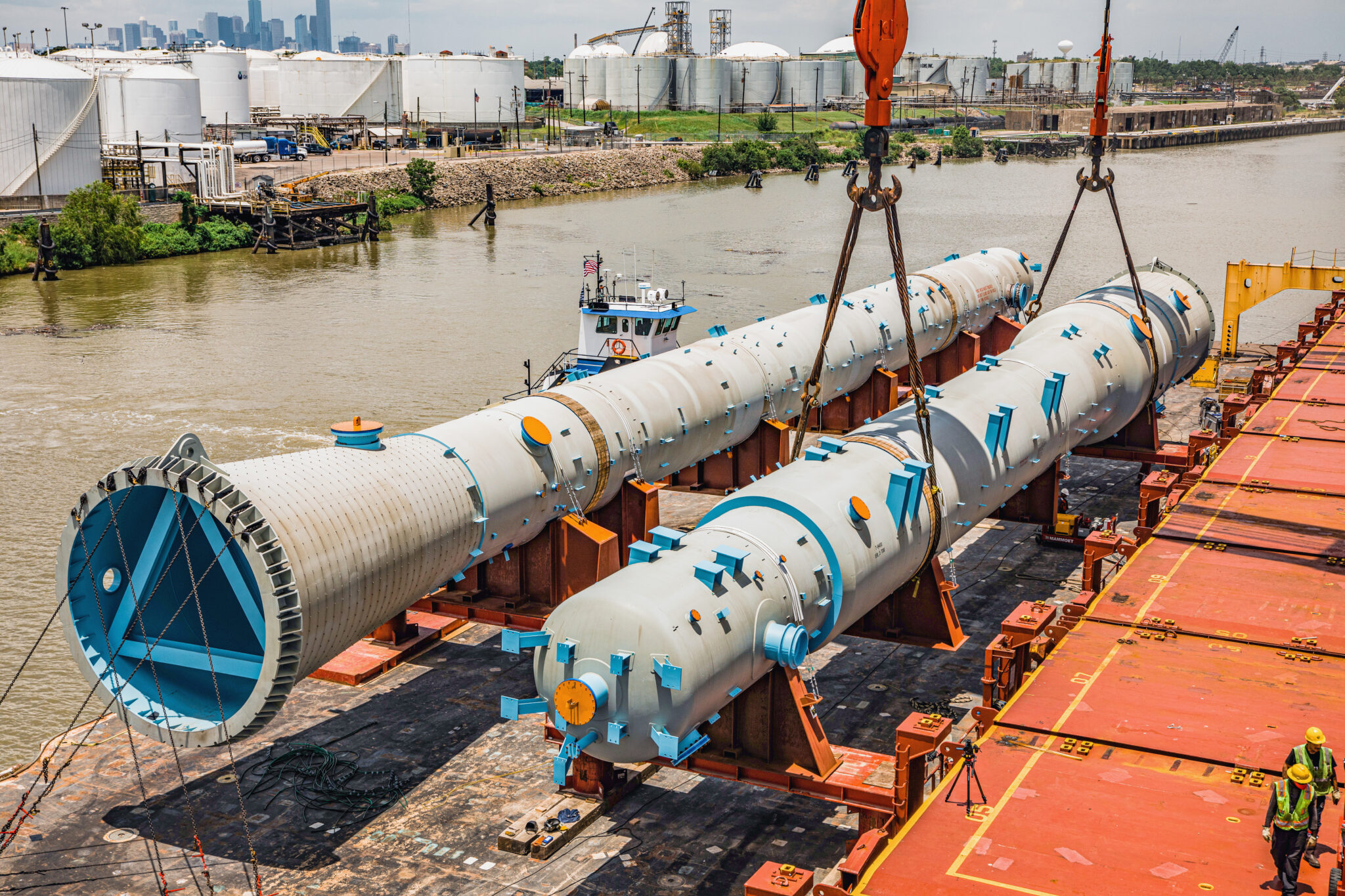 “A component of this size requires thorough analysis of all the various tasks and steps in the handling process to ensure a safe execution and delivery. This includes analysis of vessel outreach, component support points, barge stability, lashing applications, etc. deugro experts and dteq transport engineers were involved from the early drawing review to the detail planning, method statement issuance and barge preparation to the on-site supervision and delivery—ensuring that all operations were in line with the documented operating procedures and highest QHSES standards,” said Gert Jensen, Senior Vice President Operations USA, deugro.

The biggest challenge with this move was developing a safe method to receive the 300 foot column on the 260 foot barge, considering the ocean vessel’s limited outreach, the required support points and tie down restrictions, as well as a safe plan for towing on the ship channel and across the shallow Scott Bay. 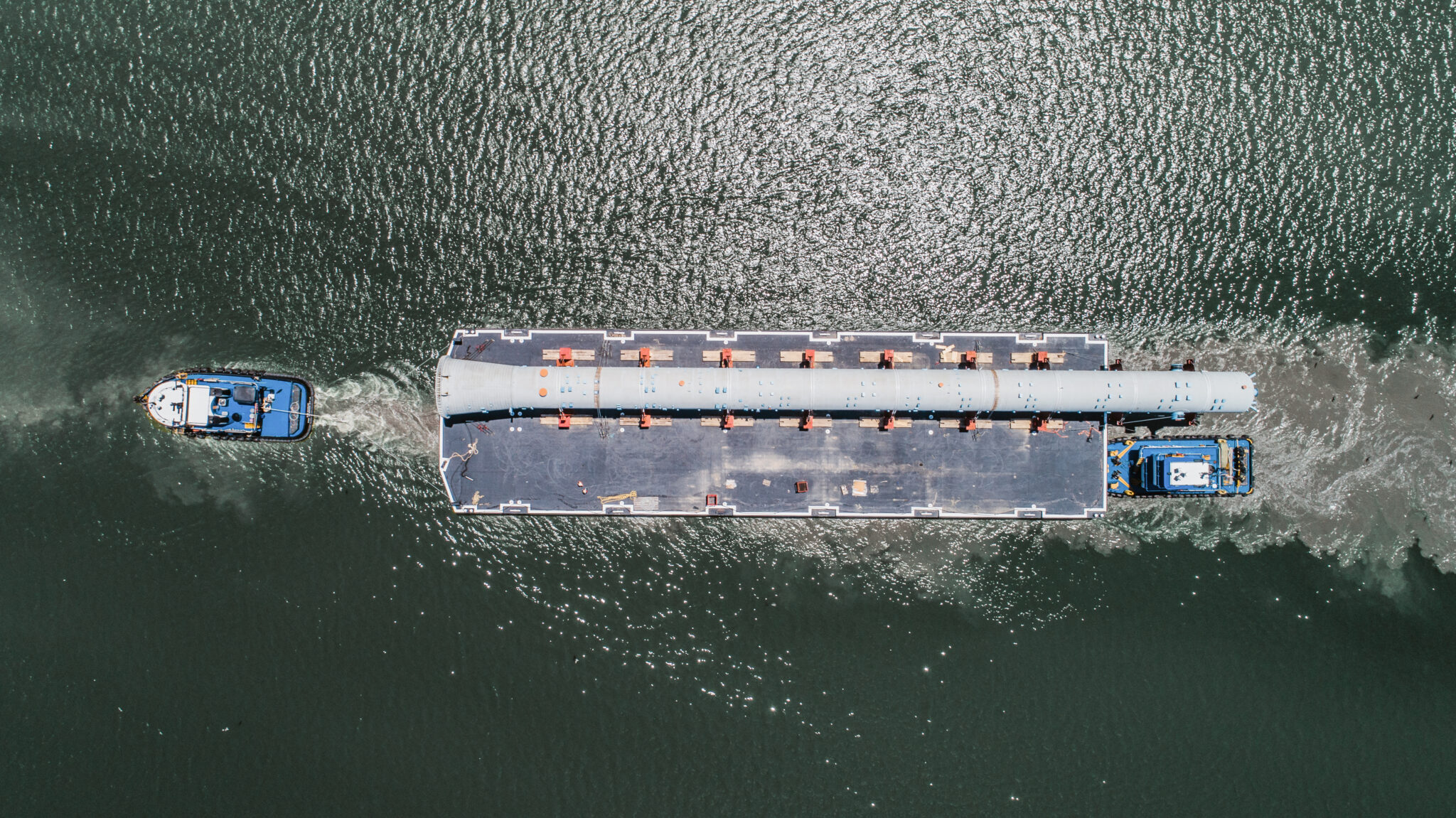 Barge voyage through Buffalo Bayou to Scott Bay, with the C6 column hanging over the barge’s stern by approximately 20 m

“Because the C6 column hung over the barge’s stern by approximately 20 meters, it needed to be placed strategically on the barge to ensure lashing according to engineering plans and to achieve proper load distribution on the structure of the barge. At the same time, a safe working space for the crew was ensured. All of this took place without having to double-handle the column with the vessel’s crane,” added Franklin Alvarez, Regional Head Transport Engineering Americas, dteq.

Once the C6 column, the 61m lights tower and the primary fractionator with a length of 49.90m were safely lashed and secured, the barges began their 20 nautical-mile and 5 hour voyage through Buffalo Bayou to Scott Bay. With the safe arrival of the barge at the dock, deugro and dteq successfully completed the transport of one of the most critical components for the chemical expansion project. 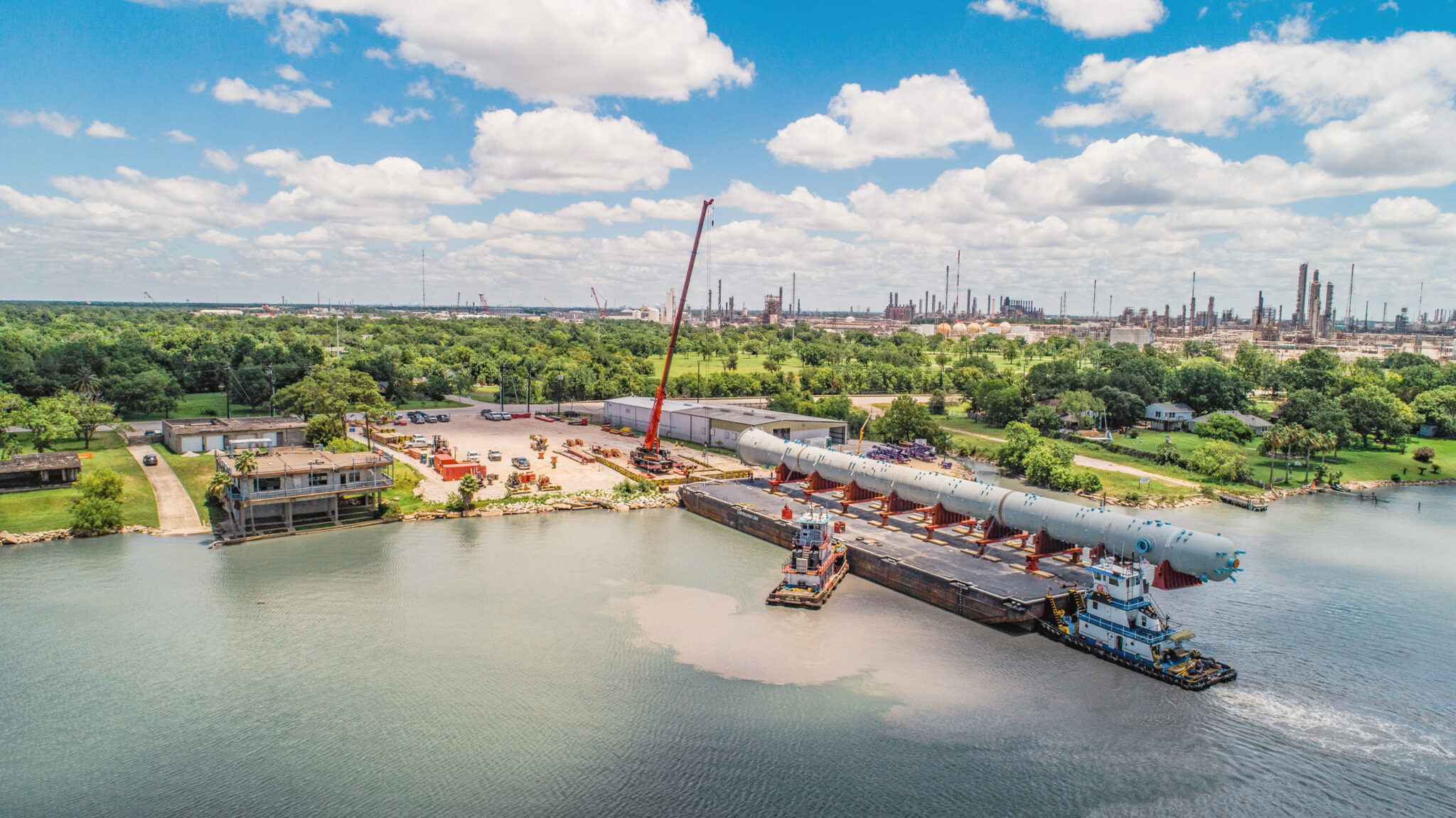 Barge arrival at the dock

“All the planning, attention to detail, and flexibility were key to managing this challenging and complex project move. The successful deugro and dteq transport was on time, within budget and without any QHSES incidents—according to deugro group’s slogan ‘Defining Logistics. Delivering Safety.’,” said Tobias M. Schultz, Executive Vice President, deugro.

ALE has performed one of North America’s heaviest crane lifts using a land based heavylift crane, lifting the 3179.5 US t (2,884.4 metric tonnes) MRU module, for an oil and gas project in Texas, USA.

Heerema’s Sleipnir to Participate in €3.4M Technology Trials with EverLoNG