In January two hybrid-electric Island Class ferries for BC Ferries were delivered to Ogden Point, British Columbia, Canada, fresh from the Damen Shipyard in Galati located on the Black Sea coast of Romania. 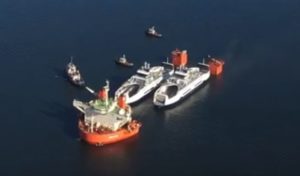 The journey of the South Korean managed Heavy Lift Vessel Sun Rise was of over 10,000 NM, from Constanta, leaving on 20 November  2019, through the Panama Canal, leaving Cristobel on Christmas Eve 2019 and arriving at Ogden Point on 18 January.

The arrival of these Damen vessels marks the dawn of a new era of clean, quiet and efficient ferry transportation on BC’s coast. The Island Class ferries are battery-powered ferries. When electric charging technology matures to make electricity in the quantities required, we will operate these new ships as all-electric ferries, using clean energy. In the interim, these ships will use an on board low sulphur diesel hybrid system.

The sponsors of the vessels at the naming ceremony in February last year were Sandy Leduc and Sandy McCormick for the Island Discovery and Melissa Fletcher and Sheila O’Neill for the  Island Aurora.

The new Island Class will carry 47 vehicles and 300 – 450 passengers and crew depending on configuration. Double-ended for easy loading and unloading, the ships will also feature wide vehicle lanes, dedicated pedestrian paths, and bicycle parking spaces.

Source Damen and BC Ferries

Sarens performs heavy lifts for the construction of the Eglinton Crosstown LRT in Toronto, Canada