Tisova Power Station is located in Karlovarsky, Czech Republic, and provides around 300MW of power to around 50,000 people in the town of Karlovy Vary. It has existed since 1954, and due to the short expected operational life of power stations has undergone a series of revisions throughout the 1950s, 1960s and 1990s.

In this instance, a GE 9E.03 turbine that had reached the end of its working lifecycle needed replacement with an updated 9E.04 model. ALE was chosen to complete this project, with its track record of performing moves under tight physical constraints and to the narrow time windows required to ensure supply continuity. 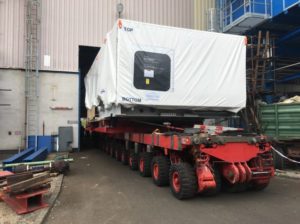 At the project’s outset, the 205t 9E.03 turbine was settled onto its foundations, meaning a conventional lift was not possible. ALE’s engineers worked in partnership with GE to design bespoke, manufacturer-approved jacking brackets that were screwed into the base of the turbine to provide suitable jacking points.

Using these, the turbine was jacked-up, and a skidding system installed underneath. The turbine was then skidded 15m transversally to a position above 12 axle lines of SPMT in a 2 x 6 configuration. The turbine was transported out of the building and lowered onto supports within a storage area using the stroke of the SPMT, for later disposal.

The incoming 220t 9E.04 turbine was then fitted with the same custom jacking brackets and jacked-up 1.5m to allow passage of an SPMT underneath. It was transported into the turbine building and skidded transversally into position, in a mirror image of the earlier removal procedure.

There was a nine-day time window set aside for the project, during which the old turbine was removed and the new one installed. Completing the exchange successfully required the work of two crews working day and night shifts. This work followed on from a previous ALE project to replace the first 9E.03 turbine to reach end-of-life at the plant.