The orginal article from the Halifax Evening Courier

It’s not every day you transport a Victorian clock tower, it’s even more unusual to do it twice!

The Collett Team have delivered a Victorian clock tower which dates back to 1873 from Elland in West Yorkshire to Ripon in North Yorkshire.

In 1987, Collett & Sons (or R. Collett & Sons as it was known at the time) were originally contracted by Andy Thornton Antiques Ltd to collect the Co-operative clock tower from the Co-op Wholesale Biscuit Factory that was being demolished in Crumpsall, Manchester. The clock was transported to Elland, West Yorkshire loaded onto a semi-low loader trailer, pulled by an IVECO 170 30 tractor unit.

Measuring 9.2m L x 3.9m W x 3.9m H and weighing 8t, the clock tower was loaded onto a wafer-bed trailer utilising two of our Lorry loader crane vehicles, one of them being the new Volvo FH540 8×4 delivery truck. Undertaking a tandem lift, the clock tower was lifted and manipulated in a ‘top and tail’ movement, ensuring the cargo was lowered safely on to the trailer.

Andy Thornton stated “Collett & Sons did a great job of moving the clock to our premises in 1987 without dropping it and we had every confidence they would do the same again. Mark Collett was in charge both times and it was good to be working with him and Collett again”

The Co-operative clock tower was once a famous landmark which sat on top of the Co-operative Wholesale Biscuit Factory in Crumpsall, Manchester. Dating back to 1873, the clock tower is often associated with some of the UK’s favourite biscuits such as the Jammy Dodger and the Custard Cream, as well as the introduction of the 8-hour working day.

Co-operative clock tower being loaded in 1987 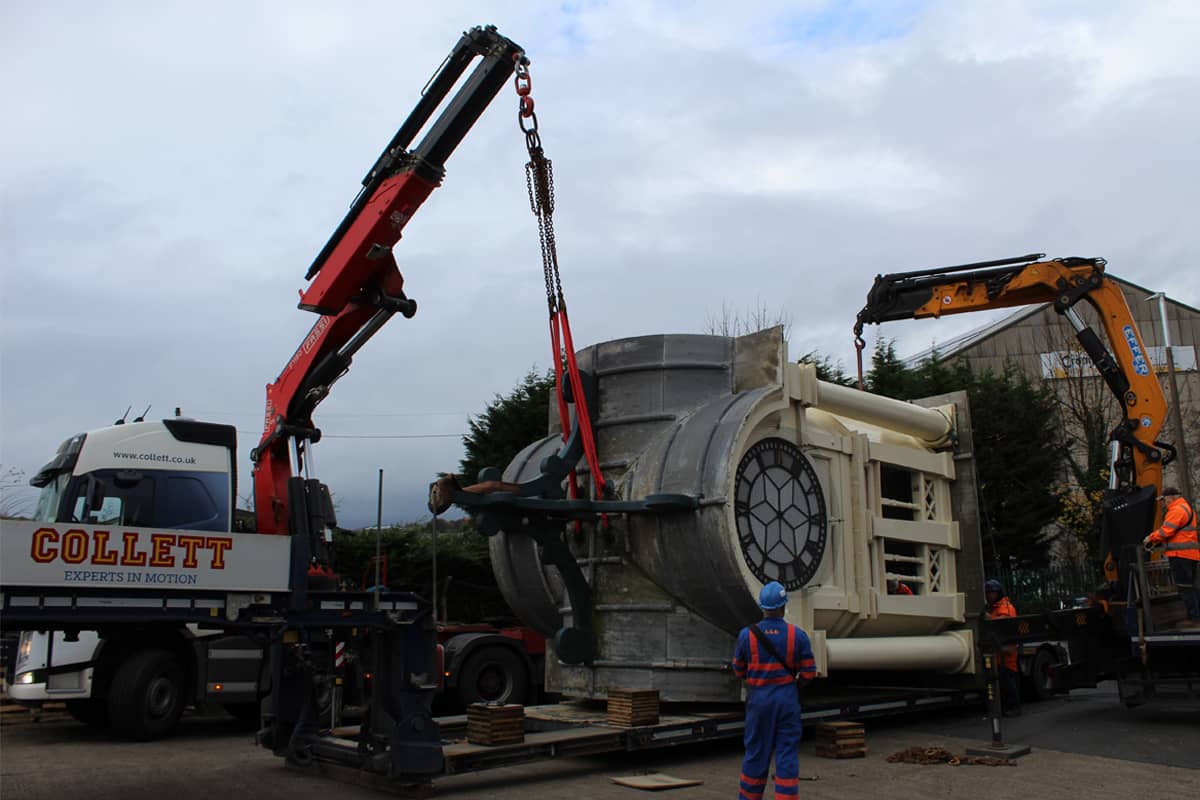 Collett and Sons Selects Faymonville Equipment to Boost Their Fleet