Appointed by Daher Projects GmbH to undertake delivery of two 335 Tonne transformers destined for the Sellindge Substation, Collett & Sons Ltd loaded up their specialist girder bridge and headed out of Cruise Terminal 1 at the Port of Dover.

Arriving at the Port aboard the same vessel, Collett deftly discharged the first, lifting from the hold of the vessel to an awaiting 14 axle SPMT and stooling off for storage portside. With the first of the 335 Tonne cargoes safely stored, Collett turned their attention to the second, lifting from the vessel directly to their Scheuerle girder bridge trailer. 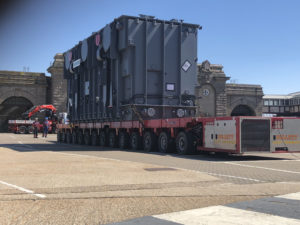 Once safely secured to the 79.5m long trailer, at 10pm Collett made the 30 mile trip from the Port of Dover arriving six and a half hours later at the Sellindge Substation site in Ashford, Kent.
The route from Dover circled the outskirts of Folkestone, before following the M20 towards site. With planning and enabling works beginning in January, Collett had meticulously surveyed the route, undertaking topographical surveys and swept path analysis to identify any required modifications and street furniture removals ahead of the project’s commencement.

As highlighted in the planning stages, Collett were unable to facilitate a right turn at Junction 10 of the M20 due to the weight of the loaded vehicle and the restrictions of the structure over the M20. This resulted in the Team travelling past junction 10 towards Junction 9 of the M20 at Ashford. Here Collett undertook circumnavigation procedures with the 79.5m loaded vehicle. After travelling back along the M20 in the opposite direction the convoy could now exit at Junction 10, joining the A20 before reversing into the site access road and on to the site itself.

Once at the site, the girder bridge was unable to navigate the site roads due to its 79.5m length. Added to this, ground loading restrictions limited the options for delivering the transformer to its designated siting. At this point Collett began transhipment operations to transfer the cargo from the girder bridge to an awaiting SPMT. Equipped with a power pack module, Collett utilised a 4-file 10-axle configuration and began the transhipment operations. 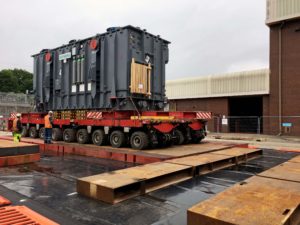 With mats, supports and beams positioned under the transformer Collett Heavy Lift employed the hydraulic capabilities of the girder bridge, lowering the cargo to the supports and allowing the side decks to be autonomously driven clear. Then, utilising climbing jacks, raised the transformer to a sufficient height allowing the 10-axle 4-file SPMT to be driven underneath.

Once jacked down to rest on the SPMT, the Team manoeuvred the 335 Tonne transformer to a temporary plinth before jacking & skidding to final position within the substation at a later date. With the first of the transformers safely on site, Collett returned to the Port of Dover, and loaded the second of the cargoes for transport.

Delivered over two consecutive weekends in June, the second transformer followed the same procedure, arriving safely on site and successfully completing the project.

For more information, news, videos and gallery visit their Company Profile on this link