Following on from the delivery of a 100t gas turbine rotor to Saltend Power Station, Hull, the Collett Team were once again appointed by Expeditors to undertake transport of the original turbine.

The Collett Team, on behalf of Expeditors, was tasked with this two-stage project, firstly delivering a new 100t gas turbine rotor to the CHP station, before removing the old module to allow for refurbishment.

Having undertaken the delivery and positioning of the new 100t gas turbine rotor from the Antonov 124 aircraft at Doncaster Airport the previous month, the original unit remained in storage at the power station awaiting transport and transshipment overseas. With the new turbine now in position and operational, Collett were on hand to begin stage two of the project, to remove the old turbine rotor from the power station site.

Stored on stools since its removal, the Collett Team arrived on site ready to load the cargo. Utilising a 12-axle drawbar trailer, Collett’s Transport Team reversed directly under the module before employing the hydraulic capabilities of the trailer to raise the trailer bed. This, in turn, lifted the 100t turbine free of the support stools, loading directly to the trailer. Once secured, the cargo left Saltend Power Station, under escort, for the short journey to Collett’s Goole Heavy Lift depot for secure weekend storage. 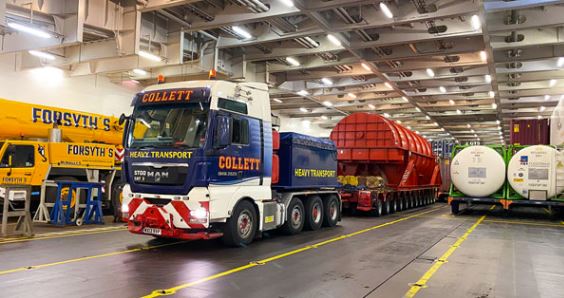 on board to Rotterdam

As Monday morning arrived, the loaded cargo took to the road again.  Continuing to travel under escort, the convoy made the short 50-mile journey to the North Killingholme CLdN Terminal, north-west of Grimsby, on the South bank of the River Humber, ready for short sea shipping to Rotterdam. 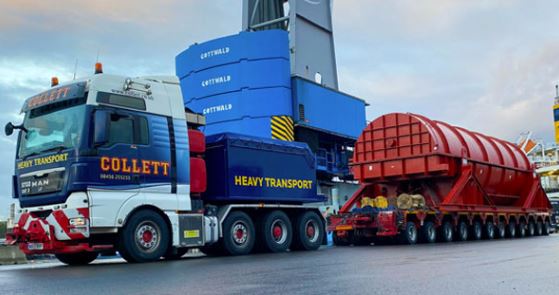 ready for discharge in Rotterdam

Still loaded to a 8×4 MAN TGX equipped with a drawbar 12 row trailer, and accompanied by Collett’s driver and steersman, the gas turbine rotor arrived at the Port of Rotterdam. After rolling off the CLdN vessel, the cargo was then transshipped from the trailer by 500t mobile crane for onward shipment to Antwerp.

With all transshipment operations complete, the Collett Team hopped back on the ferry, returning to Goole and completing stage two of the Saltend Power Station project.