Ten months ago, Austrian group Felbermayer started operations with its third Liebherr LR 11000. Since then, the crawler crane has been erecting Enercon wind turbines in Burgenland to the south-east of Vienna. Working with an LR 1750/2, the 1000t crawler crane has erected a total of thirty wind turbines. Felbermayr will be sending another LR 11000 to the wind farms near the Austrian-Slovakian border in May to support the rest of the work. The erection work is scheduled to be completed by the end of 2022 at the latest. 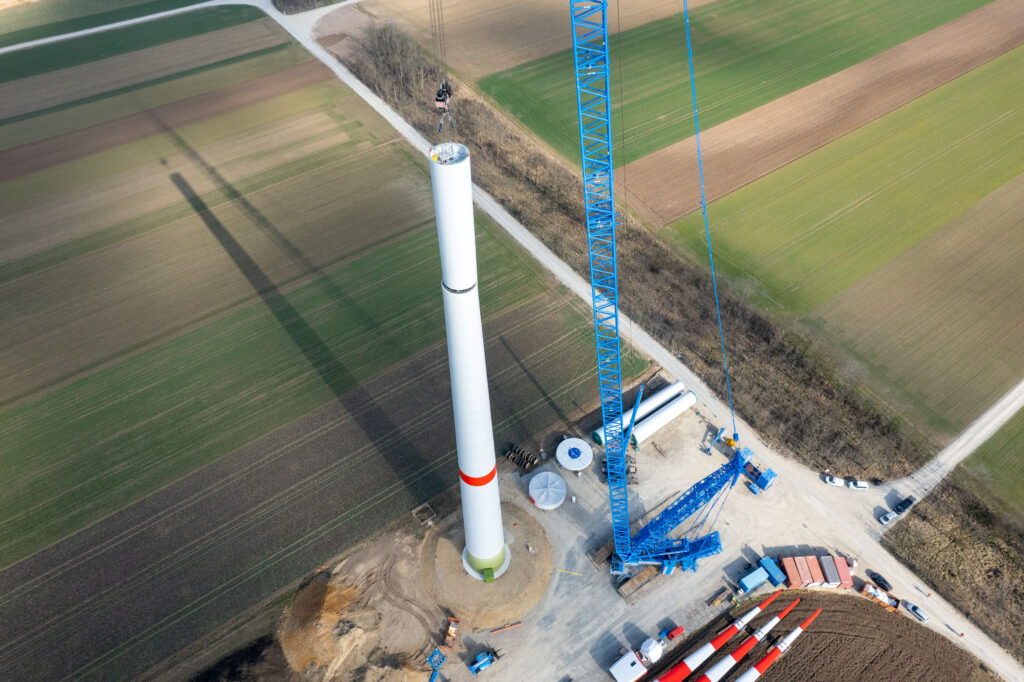 Minimal space requirement – looking from above, it becomes clear how little space the LR 11000 with V-Frame requires on site.

Renewables are taking on an increasingly important role in supplying electricity within Europe. One of the main sectors in this respect is wind power. Austrian group Felbermayr and its cranes has been involved in this sector for decades and has developed into a major erection contractor for wind turbines, primarily in Austria and Eastern Europe. Felbermayr has 13 large cranes with lifting capacity classes of 600t and over, primarily working on the construction of these massive wind turbines. All these machines bear the Liebherr logo. Another modern LR 1800-1.0 crawler crane will roll out of the factory in Ehingen during May to expand Felbermayr’s impressive crane fleet. 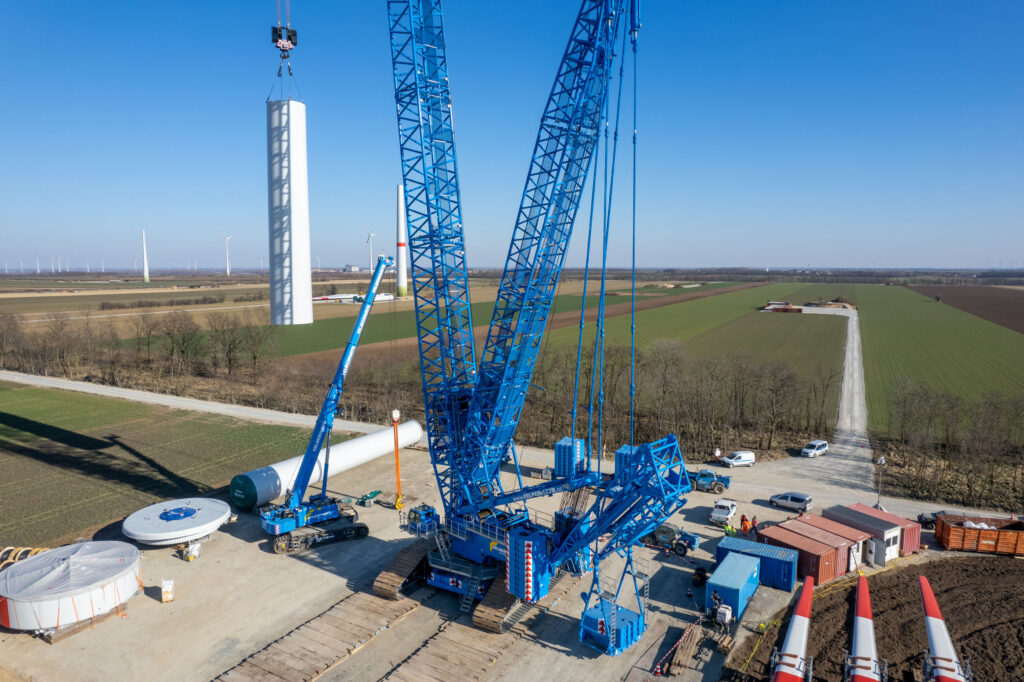 Retracted – the slewing process slides perfectly past containers and vehicles on the site with little space required for the VarioTray .

One hot spot in the process of expanding wind energy is currently around half an hour’s drive to the south-east of Vienna, close to the Slovakian capital Bratislava. Two of Felbermayr’s large cranes in their blue corporate livery are currently operating here in Burgenland, the second main area of wind turbines in Austria alongside Lower Austria. The flagship of the crane fleet, an almost new LR 11000, and an LR 1750/2 equipped with the more powerful SX boom version have been erecting wind turbines with hub heights of up to 160m for several months. The cranes hoist three steel tower segments onto the waiting concrete towers and then install the gondola, generator, hub and rotor blades. The work is always carried out when the wind conditions allow. For the LR 1750/2, the more powerful SX boom increases the maximum permitted windspeed from nine to ten metres per second to ensure less downtime during the assembly work. At this windy level of the area known as the Vienna Basin, waiting times which can last for weeks, are a major challenge to the crane crews and erection teams.

To ensure that the ambitious schedule is met (all the crane work should be completed by the end of the year), a second 1000t crawler crane from the Austrian group will arrive shortly to help. The two LR 11000 cranes will then be in action at the same time just a few kilometres apart. 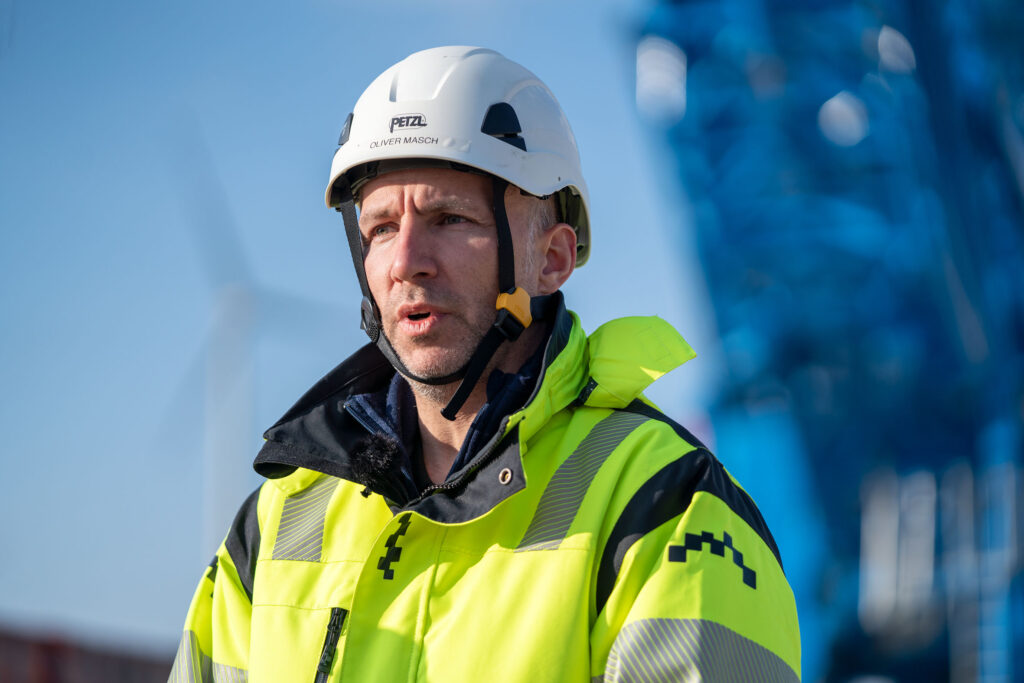 Crane speed counts when short time frames are available – the fast operating speed of the LR 11000 with V-Frame and VarioTray is decisive for Oliver Masch, Enercon’s General Project Manager.

“We are actually building slightly larger systems with a rating of 5.5 megawatts for which the cranes have to hoist the generator, for example, weighing around 130t to a height of 155m,” says Oliver Masch, Enercon’s General Project Manager at the site. “The gross load case is then slightly over 140t”, adds Jan Kürner, Supervisor and Site Manager at Felbermayr. “To do this, the VarioTray with around 100t of ballast, which we call the “Baby Tray” because of its size, is extended to its maximum radius of 30m. The large suspended ballast pallet containing a further 450t of weight remains suspended throughout the erection process and is only required to raise or lower the boom, which measures over 180m in length.”

In view of the fact that waiting times are often quite long due to strong winds and powerful gusts, it is extremely important for the project management team that the crane operations go smoothly. “The time frames with wind speeds in which we can hoist and install components often open and close very quickly, sometimes even on an hourly basis”, explains Oliver Masch. That means that time-consuming ballast in work can be a real hindrance, of course. The highly flexible V-Frame means that this work is simply not necessary on the LR  11000 at the wind farm. Urgency is always the order of the day. “And if we actually have a crane defect at any time”, continues Oliver Masch, “we are very satisfied with the service we received from Liebherr. Generally, it is only a matter of hours. But the reliability of the Liebherr cranes is almost perfect anyway.”

Supervisor Jan Kürner is also extremely impressed with the LR 11000 and its great flexibility: “I operated the first crane of this type that we purchased in 2014 myself for several years. It is a modern crane and has a very compact design and is much easier and therefore also safer to set up older cranes. And now with the V-frame – it truly is a top quality crane.”

A matter of routine – Jan Kürner, a Supervisor at Felbermayr operated the group’s first LR 11000 for a long time himself.

So when it really becomes necessary, the disconnecting derrick ballast and the hydraulically adjustable frame make it possible to work at very high speed. Or as Gernold Mailänder, the operator of the LR 11000, puts it: “The crane is no longer the limiting factor for getting on with the job. When the wind speeds are suitable, I can position one component after another without having to adjust the ballast in between. That means I can complete a wind turbine in just three or four days.” The experienced expert sits satisfied in his large operator’s cab. “The V-Frame is tip top. There is absolutely nothing to be said against it.” 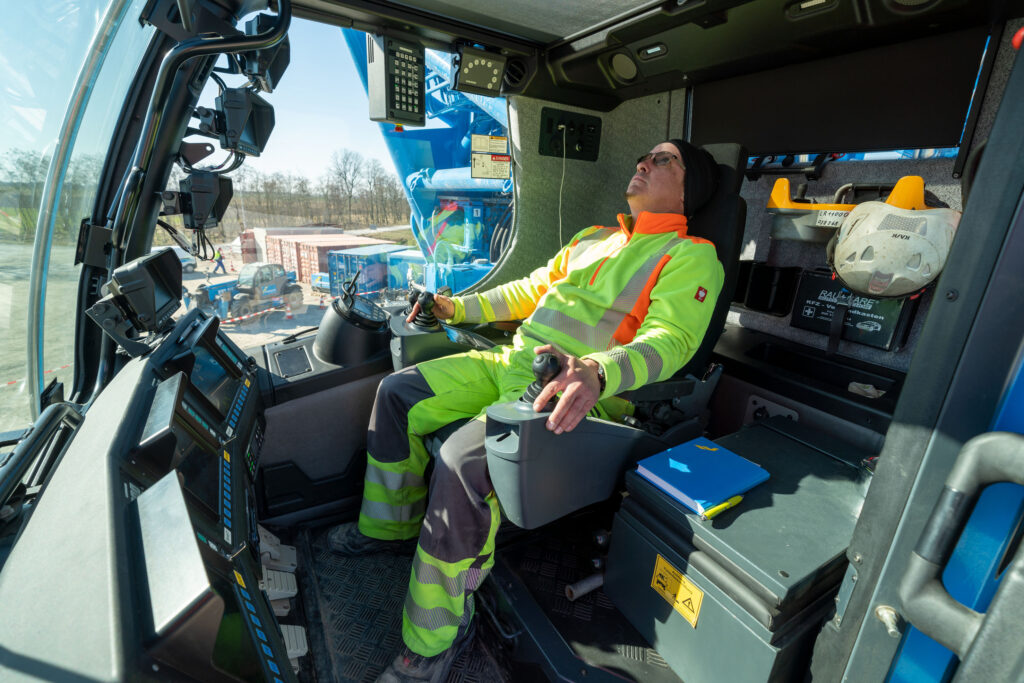 “The V-Frame is tip top” – Gernold Mailänder has been in the operator’s cab of the crawler crane in its blue company livery for almost a year.

Heavy loads, mega transports, massive infrastructure and special projects – the Felbermayr Holding GmbH portfolio contains all this and more. The company has expanded massively, above all in the states of Austria, over the last 30 years. The Austrian company’s empire now encompasses 75 sites in 19 countries throughout Europe.