First leg of the transport was a 60-mile route from Industrial Terminal Houston to MHI’s facility in Pearland, Houston, Texas for packaging. The second and last leg, a circuitous route of 310 miles, went from Pearland to BASF Refinery in Port Arthur, Texas. 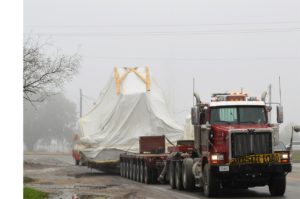 “We are very pleased to have been awarded this project by Mitsubishi and proud of the safe and successful execution, which again proves our in-house engineering and transport capabilities related to complex and challenging projects in the Gulf Coast region“, says Brent Patterson, Regional Managing Director (America’s), Oil, Gas and Industrial Projects, Blue Water Shipping.

DAKO Manages Discharge in US and Delivery in Mexico

ALE has lifted over 7,000 US tonnes using the world’s largest capacity land based crane for an oil and gas project in Texas, USA.