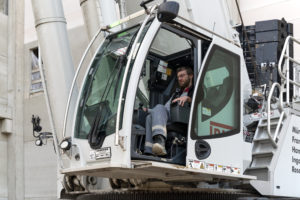 Relaxed – the BKL crane operator completed the job quickly. Day two was only required to dismantle his 450t crane.

The Ingolstadt site of crane logistics company BKL has been operating a powerful Liebherr LTM 1450-8.1 mobile crane for just over two years. This modern mobile crane has recently been demonstrating its lifting capacity installing air conditioning units on the roof of a massive industrial building.

A whole host of air conditioning units had to be installed on the roof of a new industrial building in Kösching near Ingolstadt in Bavaria. An LTM 1450-8.1 provided by BKL’s outlet in Ingolstadt was used to move the material onto the enormous flat roof. Using a 28m lattice jib at an angle of 40° and the almost fully extended telescopic boom at a length of 84m, the crane operator managed to place the loads in all the different destinations from a single location. Gross weights of up to 1.4t were positioned with great accuracy using radii of up to 89m. The position for the crane had been selected superbly taking into consideration the 22 metre high projecting edge. This meant that the crane job, involving 17 hoists and scheduled for around two days, was actually completed on the evening of day one.

Rainer Speich, Site Manager and Dispatcher at BKL in Ingolstadt was absolutely delighted. He looked back on to successful years with the LTM 1450-8.1: “You can do anything you like with the crane.” The crane has tackled bridge hoists, tower crane erection work, silo and prefabricated component assembly work and many other jobs over the last 24 months with BKL. “VarioBase® and VarioBallast® and the wide range of set-up versions, including the folding jib, means that crane is incredibly flexible to use as well as having short set-up times”, explained crane expert Speich.

Before the end of this year, BKL Baukran Logistik GmbHbased in Forstinning near Munich is scheduled to take delivery of another Liebherr LTM 1450-8.1. 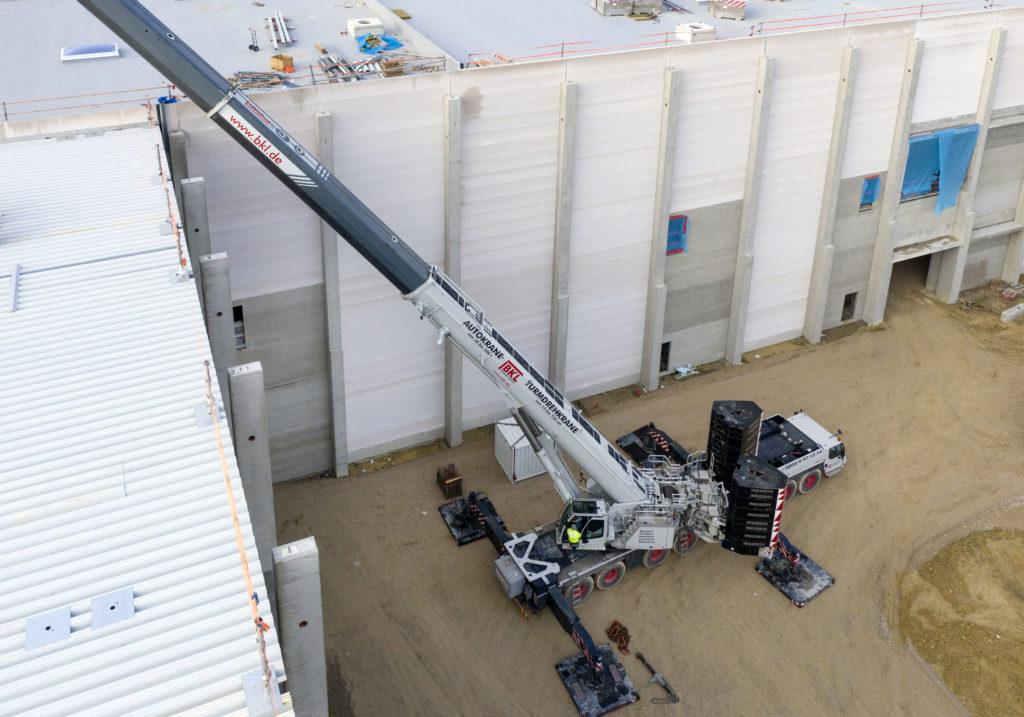 Well planned – the crane was perfectly positioned to enable it to place all the loads in different destinations from a single location.

Using a 28m lattice jib at an angle of 40° and the telescopic boom, almost fully extended, at a length of 84m

Recovery of the Harbour Cranes in Rostock