At the start of July three 168-tonne, 58-metre long steel girders were installed over the River Lippe to replace the bridge over the river on the B233 between Werne and Bergkamen in the Ruhr Area. Crane and heavy haulage specialist Autokrane Schares GmbH used two Liebherr LTM 1500-8.1 mobile cranes for the challenging hoists.

The bridge over the River Lippe is over 70 years old and has suffered significant damage, which cannot be rectified by repair work. A new, wider bridge is therefore being built directly next to it. Three massive steel girders form the basis for the new structure which will be pushed into position once the old bridge has been demolished.

Schares positioned one of the 500 tonne mobile cranes on each side of the river. The crane locations have been specially prepared for the massive loads. Eric Reichmann, who is manager of the sales, engineering and projects departments at Schares, explained: “The cranes had to be moved into position on an auxiliary bridge and were then supported on concrete foundations which had been specially built for the crane work. Setting up the cranes from there was a challenge as the ballasting procedure had to be carried out with a very large radius over the undercarriage cab”.

The girders were moved from the storage site onto the existing bridge using SPMTs. “The axle pressures of the SMPTs were closely monitored and documented to protect the old bridge. They were also documented by cameras which were directed at the screens of the cranes’ load moment limiting system”, said Reichmann.

The maximal load on the old bridge structure and the corresponding axle loads had been precisely calculated in advance. All the crane movements followed a defined hoisting plan. The project planners had prepared a complete 3-D CAD plan in advance for this purpose. The further the self-propelled trailers drove onto the bridge, the greater the load the cranes had to take.

The LTM 1500-8.1 cranes were each ballasted with 165 tonnes of counterweights. To relieve the load on the existing bridge, the telescopic boom of the more distant crane had to be luffed down low at a radius of 34 metres. In the final load support position, each of the two 500 tonne cranes had 84 tonnes on their hooks at a 16 m radius and carefully positioned the giant girders on the temporary abutments in a tandem hoist. The work was completed so smoothly that it was actually possible to open the existing bridge earlier than scheduled.

The new bridge structure will shortly be given a temporary road surface over which traffic will flow whilst the old bridge is being demolished. The new B233 bridge over the Lippe is scheduled to be completed by the end of 2021. 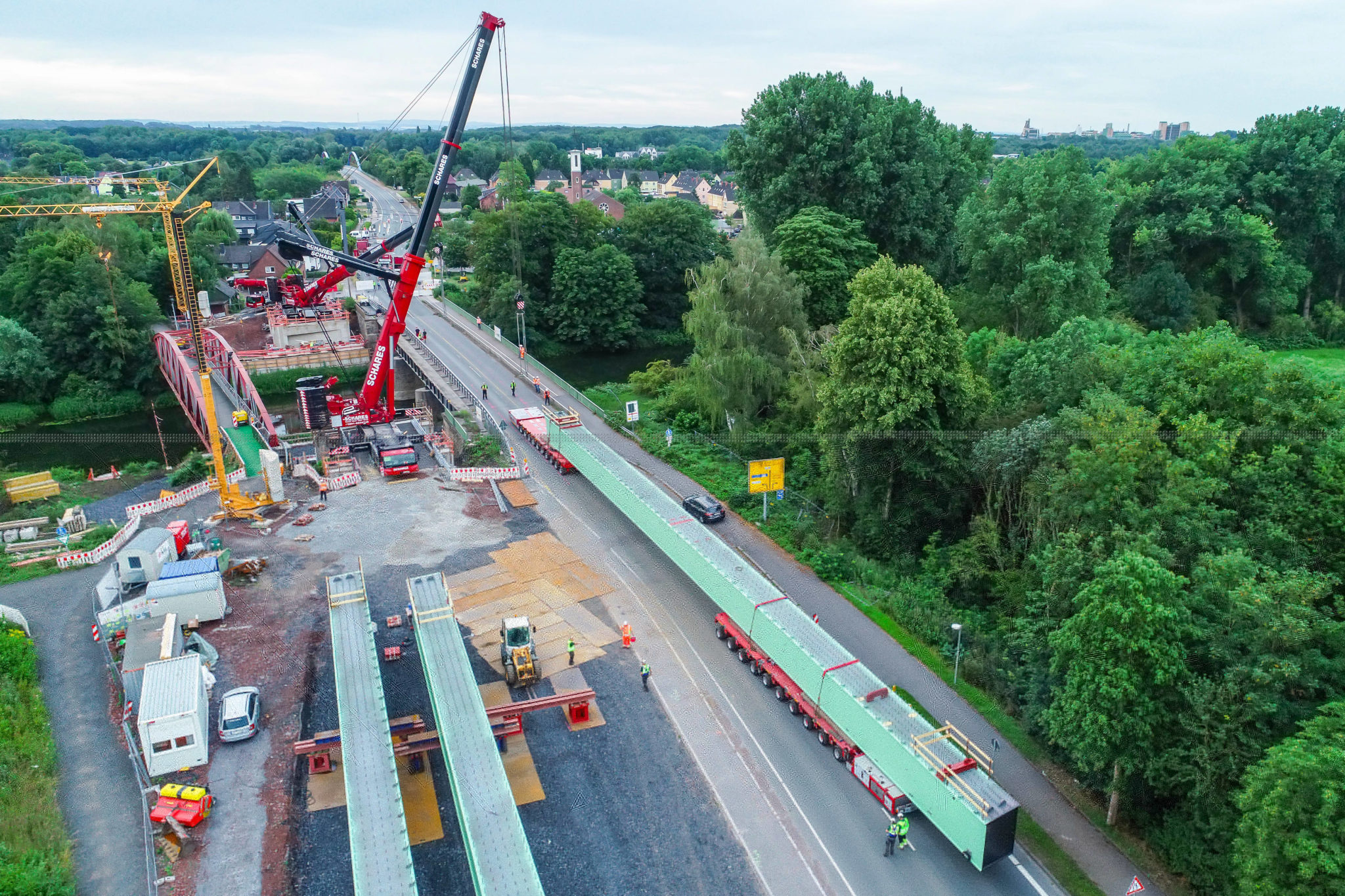 SPMTs transport the heavy girders on to the 70 year-old Lippe bridge.

84 tonnes suspended on each hook of the two Liebherr LTM 1500-8.1 mobile cranes. 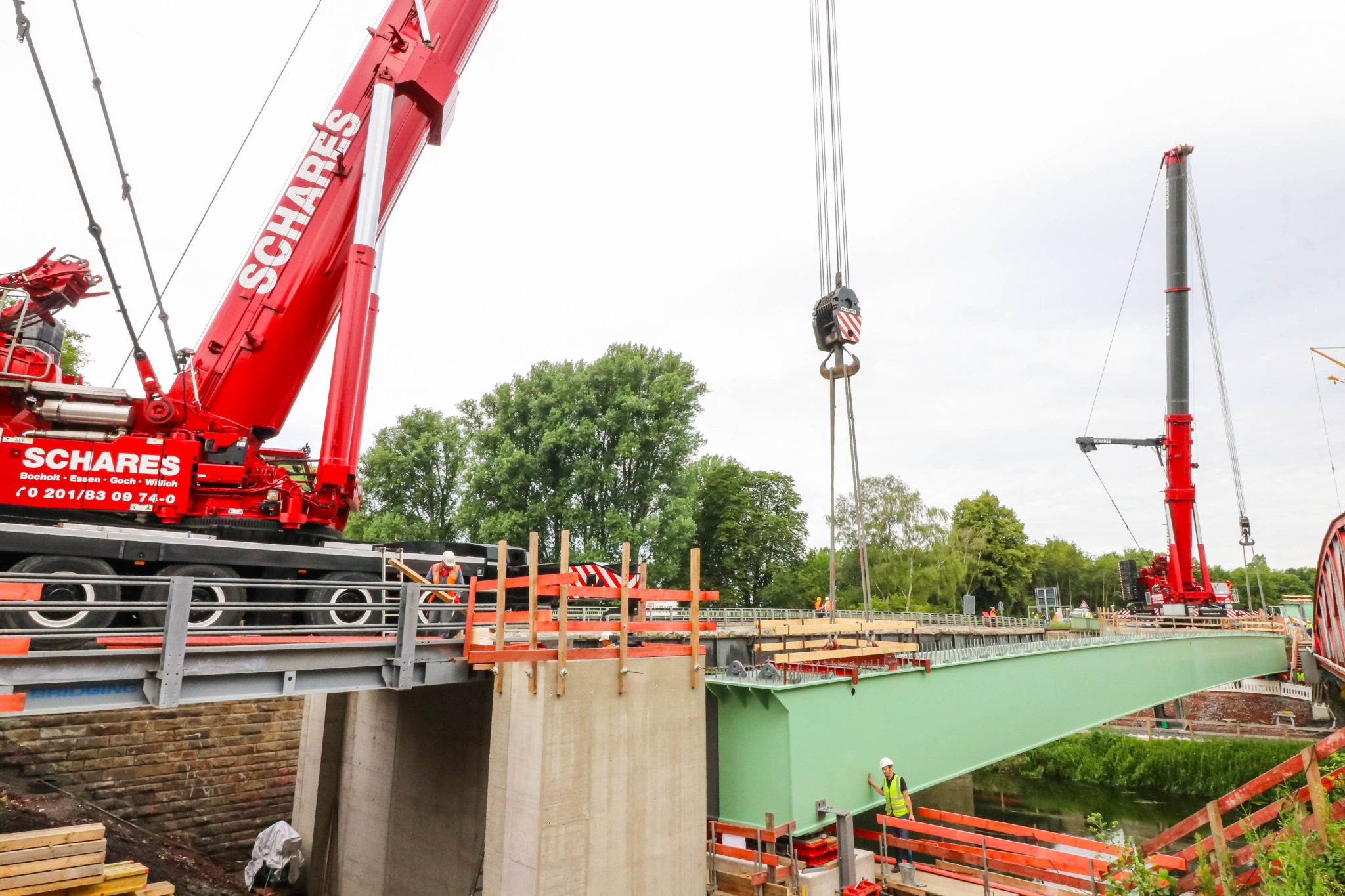 The steel girders weighing 168 tonnes are carefully placed on the abutments.

Supported on concrete foundations specially made for the hoists, the cranes take the strain off the heavy transport vehicles as they move into position to prevent damaging the existing bridge.