Ainscough Crane Hire’s Cambridge depot is celebrating its role in the A14 upgrade, Britain’s biggest ever road project, following the announcement by Highways England that it is set to open to drivers more than half a year early.

The £1.5 billion scheme to improve journeys between the East of England and the Midlands was originally scheduled to open to traffic by the end of 2020.

In mid-February, the Government-owned company said it plans to open the A14 improvement, a 21 mile stretch of road from Cambridge to Huntingdon, ahead of schedule this spring.

The good news follows the recent December opening of a part of the scheme – a new 12-mile bypass south of Huntingdon – a whole year early. Already, the bypass has been used to make more than five million journeys.

Ainscough has worked on numerous elements of the project since it began in November 2016, and most recently undertook a landmark role at Section 3 of the project, which covers the area from Huntingdon to Godmanchester, lifting into place the last bridge beams in the sector.

Ainscough Crane Hire’s Cambridge depot manager, Sebrina Cooper, said: “This has been a great project for our team to be part of. The A14 Integrated Delivery Team developed an ambitious programme that required our team to consistently deliver in order to meet the tight timeframes required for the project to be ready to serve motorists. 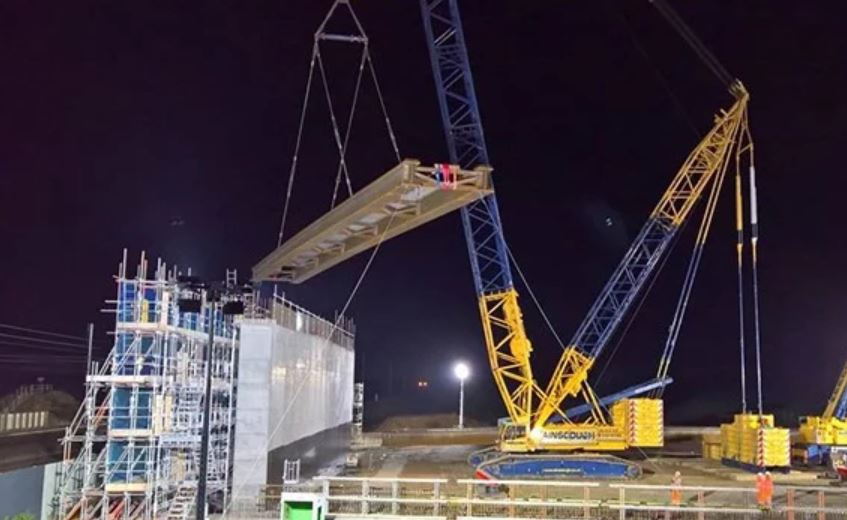 “We’re very proud to have met those targets and to have played our part in the project opening ahead of schedule. The early completion is a real testament to the excellent teamwork and planning overseen by the Delivery Team, and I’m sure the impact of this new incredibly important piece of infrastructure will be felt across the country for many years to come.”

Highways England chief executive Jim O’Sullivan said:
“The A14 is a vital route used by 85,000 drivers every day and including more than 21,000 hauliers transporting essential goods around the country.

“Opening this scheme more than six months early and on budget shows what the UK construction industry can achieve working with Highways England on the Strategic Road Network. I would like to thank them for their focus on our joint success and for their one-team approach.

“Also, I would like to thank road users, residents and stakeholders for their patience and support during our work. This road is not just a piece of national infrastructure – it brings benefits to the region and local towns and communities too.”

Ainscough Lifts for Opto in Newcastle