One of the most striking new neighbourhoods in London has reached a key milestone thanks to the expert planning and delivery of a complex lift by Ainscough Crane Hire.

Ainscough’s Heavy Cranes team was appointed by international real estate organisation Vastint UK to construct and install a new bridge at Sugar House Island, an emerging canal-side neighbourhood that will bring together a growing community of 6,000 people to live and work amongst the waterways of east London.

The 38m Matilda’s Bridge, designed by a team of architects and engineers and built by Wood Beton, is a prefabricated, concrete and glulam structure. It was built in a factory in northern Italy and transported in large sections to Sugar House Island,

Ainscough’s team undertook a three-stage operation to attach the 23m timber section to the concrete abutments before lifting the completed bridge into place.

The first stage involved offloading the precast bridge units – with maximum weights of 11t – which were placed in a compound using a Liebherr LTM 1095-5-1 crane with larger mats used to reduce loadings.

A Liebherr LTM 1250-6.1 was deployed for the second stage, which entailed offloading the 22t timber bridge onto transport to enable it to be in position for its final lift. 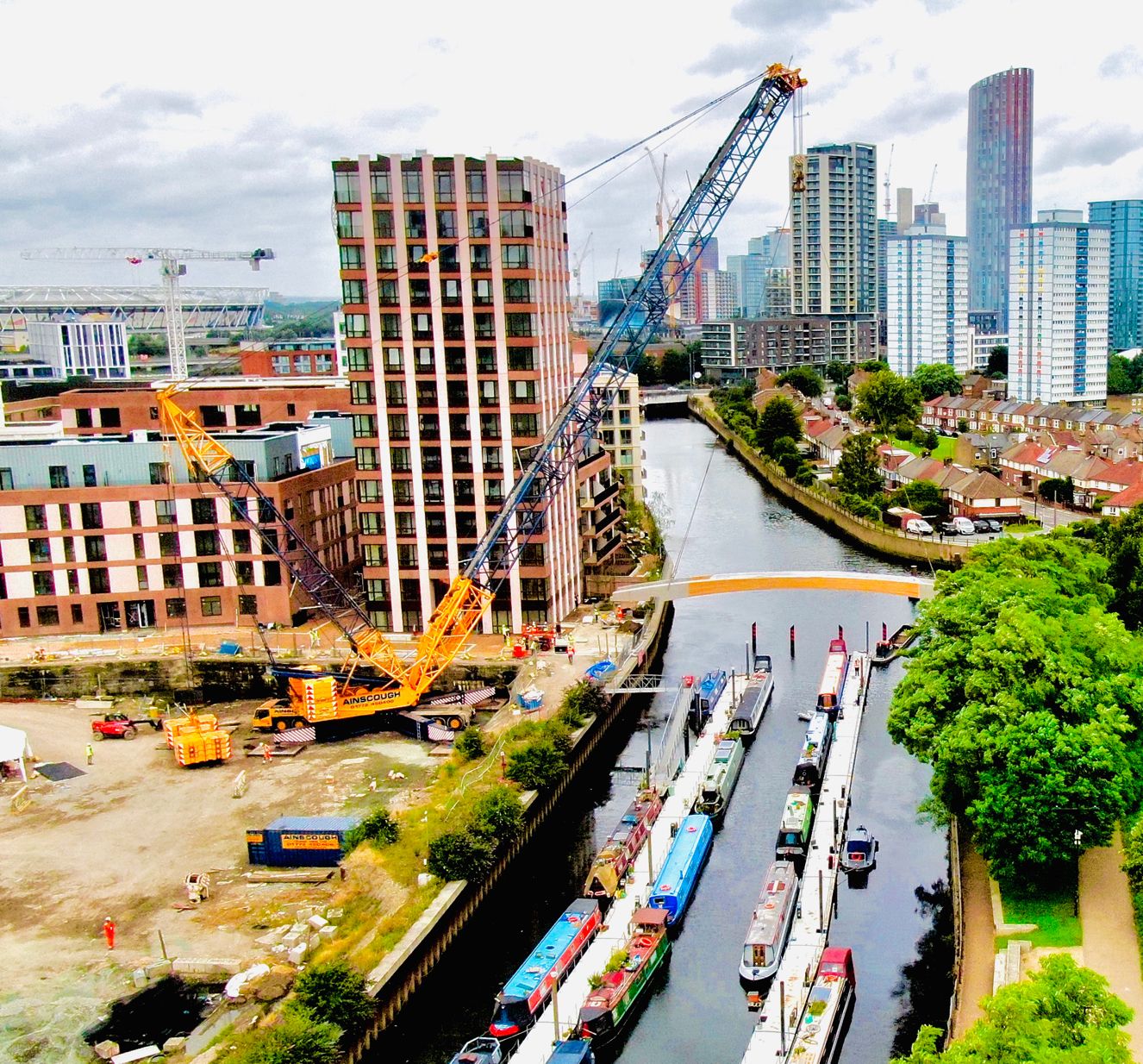 From there the same crane picked up and installed the precast bridge units at alternate sides of the bridge until the new structure was fully formed, with eight installed at each end.

The bridge was designed to precision using 3D modelling meaning that, when lifted in, the 40 threaded rods fixed to the concrete slotted into the foundations with ease.

While the lift was put back by several hours due to wind delay, once the Ainscough team began the operation was completed efficiently and without incident.

Andrew Yacoub, assistant project manager, Vastint, said “Ainscough Crane Hire’s Heavy Cranes team was extremely professional, punctual, and careful in not damaging the timber bridge when removing the slings. They are a credit to Ainscough. We were delayed by over two hours but due to Ainscough’s professionalism and expertise the bridge was in position only 45 minutes later than planned.”

Igor Scalas, Heavy Cranes project engineer at Ainscough Crane Hire said: “It was a wonderful experience to work with Vastint by installing this brilliant new bridge at a very exciting new part of London. This project is a great example of how at Ainscough Crane Hire we can overcome complexities in order to deliver a safe and efficient lift programme.”
Ainscough’s team for the job included David Baxter, Christian Beasley, Marcus Hirst, Sean Mason, Clark Stewart, Stephen Kennedy, and Andy Walls.

The new bridge is named after Matilda of Scotland (or Good Queen Maud), wife of Henry I, who instructed a bridge to be built across the River Lea after her entourage suffered a soaking trying to cross the ford (near today’s Old Ford) to get to Barking Abbey.

The Roman Road was notorious with travellers and Essex farmers trying to reach the haymarkets that ran along what is now the Bow and Mile End Road. The bridge was in the ‘French style’ like a ‘bow’ and was the first arched stone bridge in the UK. The unusual design may have been why the place became known as ‘Stratford-atte-Bowe’, from which today’s ‘Bow’ originates.