Ainscough Crane Hire has supported HEINEKEN UK in replacing the wort kettles at its Manchester brewery. 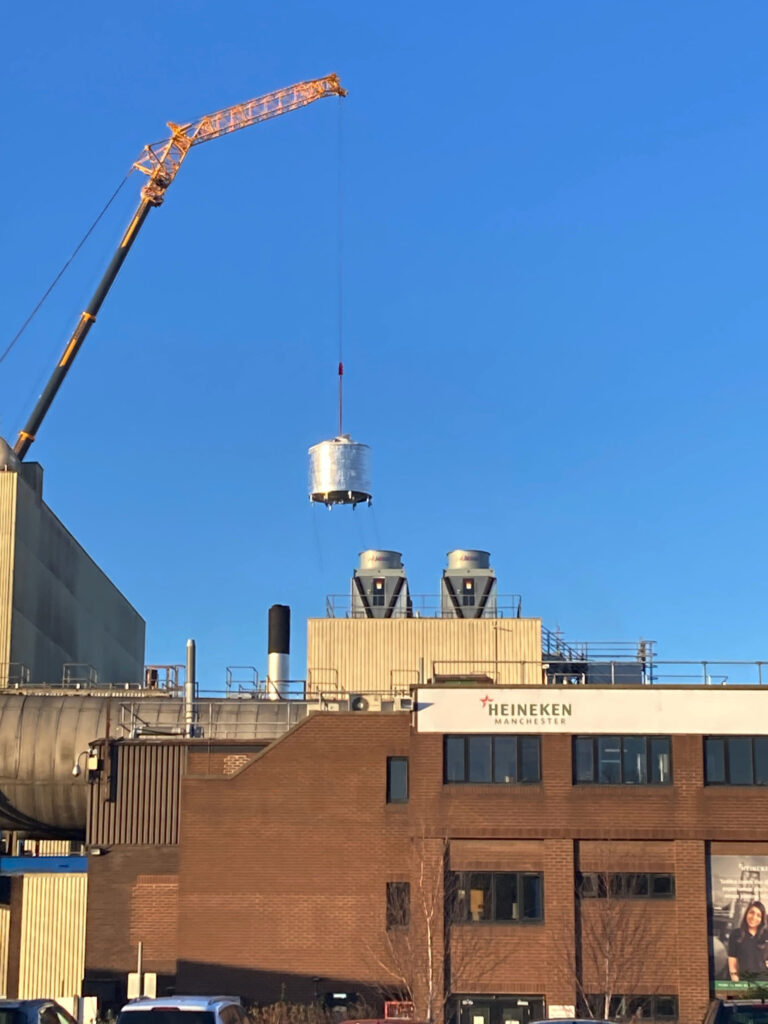 The major project took place in February and involved recent additions to Ainscough’s fleet – a pair of LTM 1650-8.1 cranes capable of lifting over 700 tonnes.

Due to the complexities of the beer production process and the requirement for silos to fill with grain, there was only a window every 21 days to work on the kettle drums. Ainscough was able to complete the job over five days in total, with HEINEKEN remaining operational throughout.

On-site, the crane was positioned against a 25m high building and saw Ainscough lifting at a height of 52m. A 150t crane was used to build up the 650t, which was surrounded by a scaffold walkway to enable access to modify the wort kettles.

Andy Banks, contract lift manager at Ainscough’s Manchester depot, said: “This was a major task to replace tired equipment and ensure the brewery remains efficient. It was only right that our most impressive models were deployed and it’s fair to say that the LTM 1650-8.1 cranes made light work of an intricate job – particularly given the terrible weather.”

The team worked on night shifts to accommodate adverse conditions and benefited from the wind speed capacity tables incorporated into the model’s design. The LTM 1650-8.1 also incorporates VarioBase®, which enables each outrigger to be extended to a different length. The increased safety and ease of use take the strain off the crane driver who can concentrate fully on the hoist. The enhanced range and lifting capacity means that the system’s capacity has also been improved.

80m away from the main crane, two 13.5t kettles were built and welded before being lifted from the scaffold to a zebra crossing and finally transferred to the 650t machine which lifted the kettles into the brewery for use.

Andy continued: “This was more than a general maintenance job and required a high level of planning. Leaving a three-week gap between the two replacements ensured that disruption was kept to a minimum and wouldn’t have been possible without these 650t cranes. They afforded significant flexibility and avoided a main road closure.”

The project was supervised by Matthew Baxter and involved two operators – John Day and Ian Stonier.