Ainscough Crane Hire has deployed its expertise in providing urgent lifting solutions to support its client Network Rail in the aftermath of the recent Salisbury train crash.

Two passenger trains collided on the approach to a tunnel near Salisbury station at approximately 18:45 GMT on 31st October.

Ainscough Crane Hire was contacted by Network Rail several hours after the crash, and were requested to attend the site first thing the following morning. Ainscough’s technical contracts manager for Heavy Cranes – Dave Baxter – travelled from the North West and was in Wiltshire by 7 am to meet the Network Rail team.

After it was confirmed that the five carriages that had to be removed from the tracks could not be jacked or lifted by a rail crane in isolation, Ainscough prepared a lifting proposal that would see an 800t mobile crane in conjunction with a rail crane recover and remove the rail carriages.

Upon approval of the proposal from Network Rail, Ainscough began to mobilise the 800t crane from its previous job site near Rochdale, to enable it to rig up with an assist crane on a closed section of the A30 London Road in Salisbury.

The five carriages were lifted onto lorries upon which they were transported to The Long Marston Rail Innovation Centre, prior to being unloaded by additional Ainscough cranes ahead of further inspections.

The operation was completed on Sunday, with the cranes derigged by Monday.

Andrew Spink, Heavy Cranes operations director for Ainscough Crane Hire said: “This is the sort of job we hope we never have to work on, as doing so means there has been an incident which has put people’s safety in danger.

“Such incidents are thankfully rare in the UK, but we as a business stand ready to support our colleagues in the rail industry whenever we are needed. Therefore, when the call came through from Network Rail regarding the Salisbury crash, we immediately set to work in exploring the best lifting solution to clear the tracks and allow the repairing of the railway line and signalling equipment.

“It was unfortunately inevitable that the closure of such a busy road would cause disruption to the local community, but we were able to complete the lift programme as quickly as possible in order to minimise that inconvenience.

“We will continue to support Network Rail however we can following this incident. Our thoughts are with those that were hurt in the collision.” 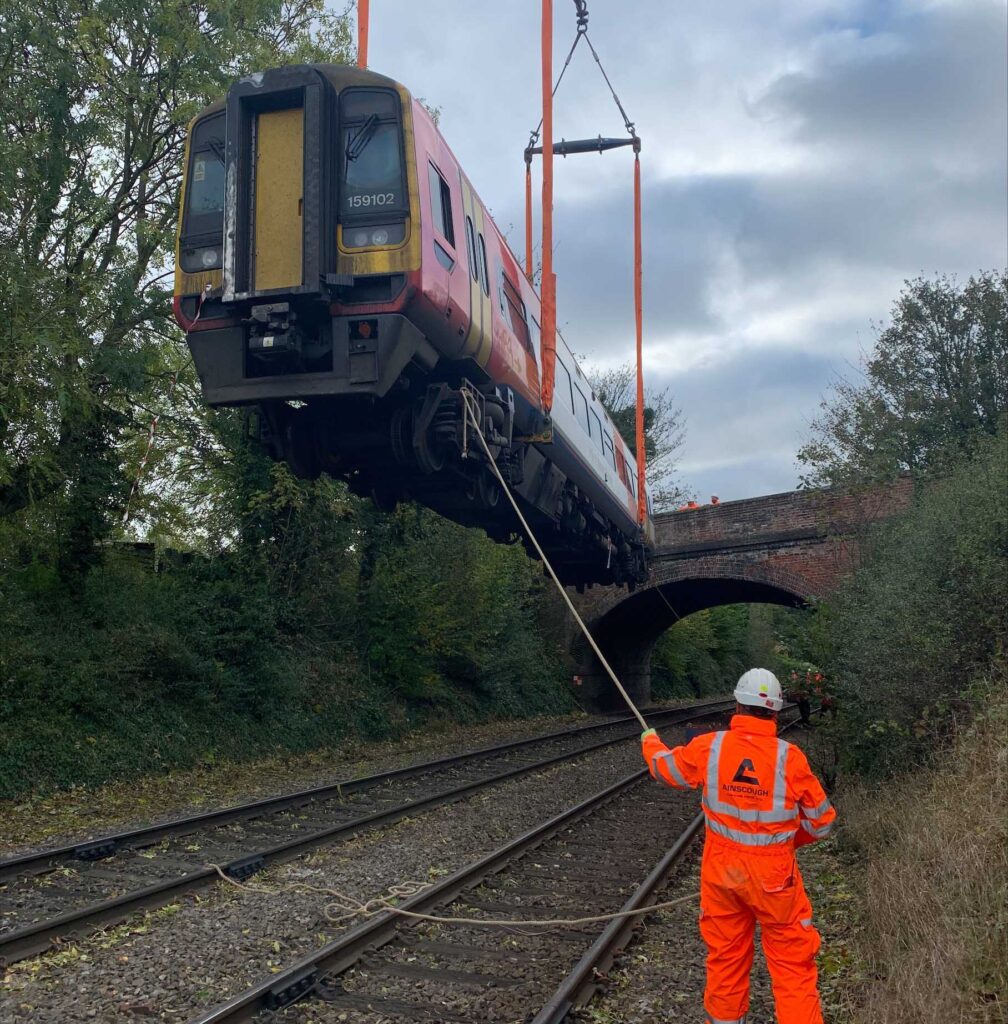 Osprey Lifting on 6 Projects for Network Rail in UK – Video

Ainscough onboard HMS Queen Elizabeth for the Second Time