About 3 months ago, AGL was approached by one of their main customers to device a concept for moving 6 steam drums ex workshop in Korea to Hamburg port, Germany.

Originally there was no time pressure for the transportation, however since January, the situation changed from one day to another. So AGL had to rework the concept and switch the mode of transport from Break Bulk vessel to Ro-Ro carrier, as the latter had a much less transit time. The only disadvantage was that another reloading had to take place in Bremerhaven, as that was the only port nearby that RoRo carriers called at. Nevertheless, within a few days, AGL changed the concept and collected the steam drums ex workshop together with the assistance of Project Logistics Alliance member Flogis International in Korea. 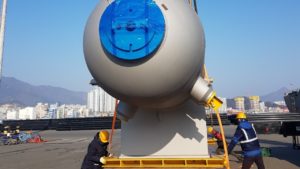 The cargo has the following dimensions & weights: