The junction in Wendlingen is a crucial point in the further construction of the ICE railway line in Germany between Stuttgart and Ulm. To complete it, a steel bridge weighing 820t had to be pushed into place over a 4-lane road at a junction with A8 motorway. This was a mammoth task in which several experienced partners were involved. In the middle of all the equipment to install the bridge were 24 axle lines of Cometto SPMT’s.

Parallel to the A8 motorway an extra-ordinary transport was waiting to traverse the 4-lane federal road #313. Many different parameters had to be considered. “What was special about it was the simultaneous use of three different systems, which was also a first for us,” says Marco Wilhelm, project manager from the Wiesbauer company, describing the challenges. “We had to coordinate the Cometto SPMT, the skid track from Schachtbau Nordhausen and our 1000-tonne crawler crane.” All protagonists were concerted and optimally prepared. There was still a gaping space where the bridge was to connect the railway sections in a few hours. For this mission, Wiesbauer coupled its SPMT combination in a 12+12 side-by-side arrangement.

There was great public interest on that morning. Those interested worldwide were even served by a live stream in real-time. Wiesbauer looked back on weeks of preparation. Marco Wilhelm reports: “We were able to countercheck the values and push forces supplied by the customer in advance using the Cosmo planning program from Cometto. This made it possible to push the 820-tonne steel bridge over the skid track towards the crawler crane with the right force, centimetre by centimetre and above all jerk-free.” And the theory then became practice. “I’m continuously amazed by the technology when the values and sequences determined in advance also turn out to be correct. Only intensive pre-planning allows everyone involved on the building site to be on the safe side at all times.”

Mattias Roeder, project manager from Schachtbau Nordhausen, also experienced the procedures attentively, but relaxed. “With the help of the self-propelled Cometto heavy load modules from Wiesbauer and the constant position checking by our surveyors, it was possible to accurately position the 52-metre-long structure. It doesn’t get any more precise than that! Perfect technology with top employees from all skills in action. Thanks go once again to everyone that we were able together to meet our schedule.”

The giant steel structure covered the distance with centimetre precision on the self-propelled modular transporters. Shortly before reaching the end position, one end of the bridge was set down on skid track. With the Wiesbauer 1000t crawler crane supporting the overhanging end, a ram made of steel girders bolted to the SPMT pushed the bridge into position.

Team leader Fabian Spathelf from the building contractors Gottlob Rommel of Stuttgart watched the smooth procedures with a smile. After all, he can trust the Cometto technology. “When it came to pushing the bridge, the saying was true: slowly but surely. With the Cometto SPMT, the transport speed was set so precisely that it optimally matched the insertion of the Teflon plates of the skid track.”

The man who manoeuvred the self-propelled vehicle safely and with a cool head in every situation was Leonard Schmid. The experienced heavy load professional knows the ropes and explains some of the technical strengths of his Cometto SPMT that helped in this task, which was a special one even for him. “It was a great help to us that I could regulate the output of the two power packs with the potentiometer on the radio remote control so that it was possible to implement the pushing instructions from Schachtbau Nordhausen perfectly. It was only this that made the slow advance with the forward movement possible at all.”

After eight hours of work, the steel bridge was sitting safely in its new position. A successful transport project in which use was made of a “cross-hire rental” of the axle lines.  In addition to the 12 Cometto axle lines and two power packs from Wiesbauer’s fleet, 12 MSPE units from Schares of Bocholt were also involved.

Trendsetting years lie before us in bridge construction and maintenance. This work will play an essential part in Germany’s infrastructure plan in the coming years. The project in Wendlingen illustrates that competent planning and technically sophisticated transport solutions will shape the future. 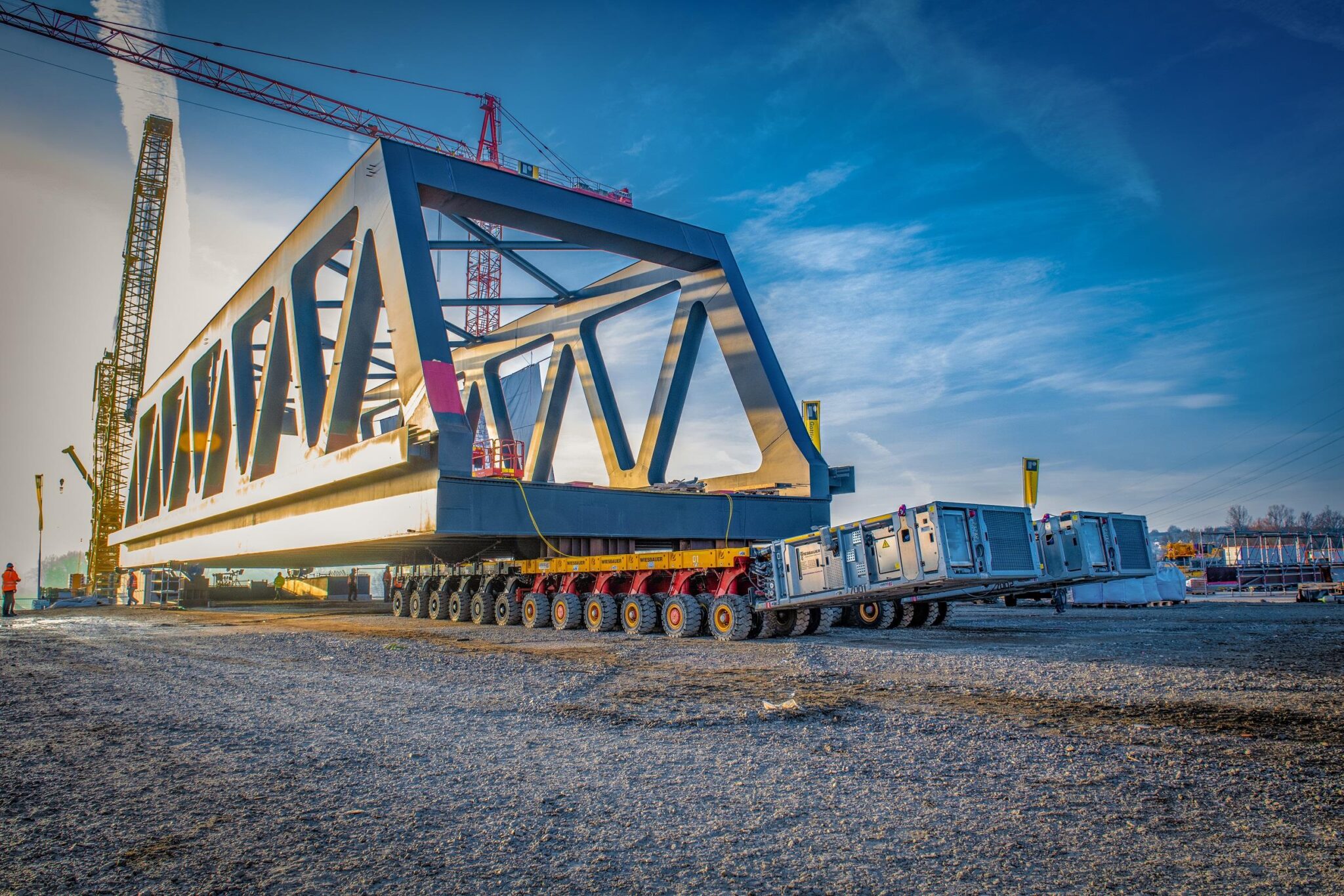 Moving the 820t steel bridge into place was a mammoth task 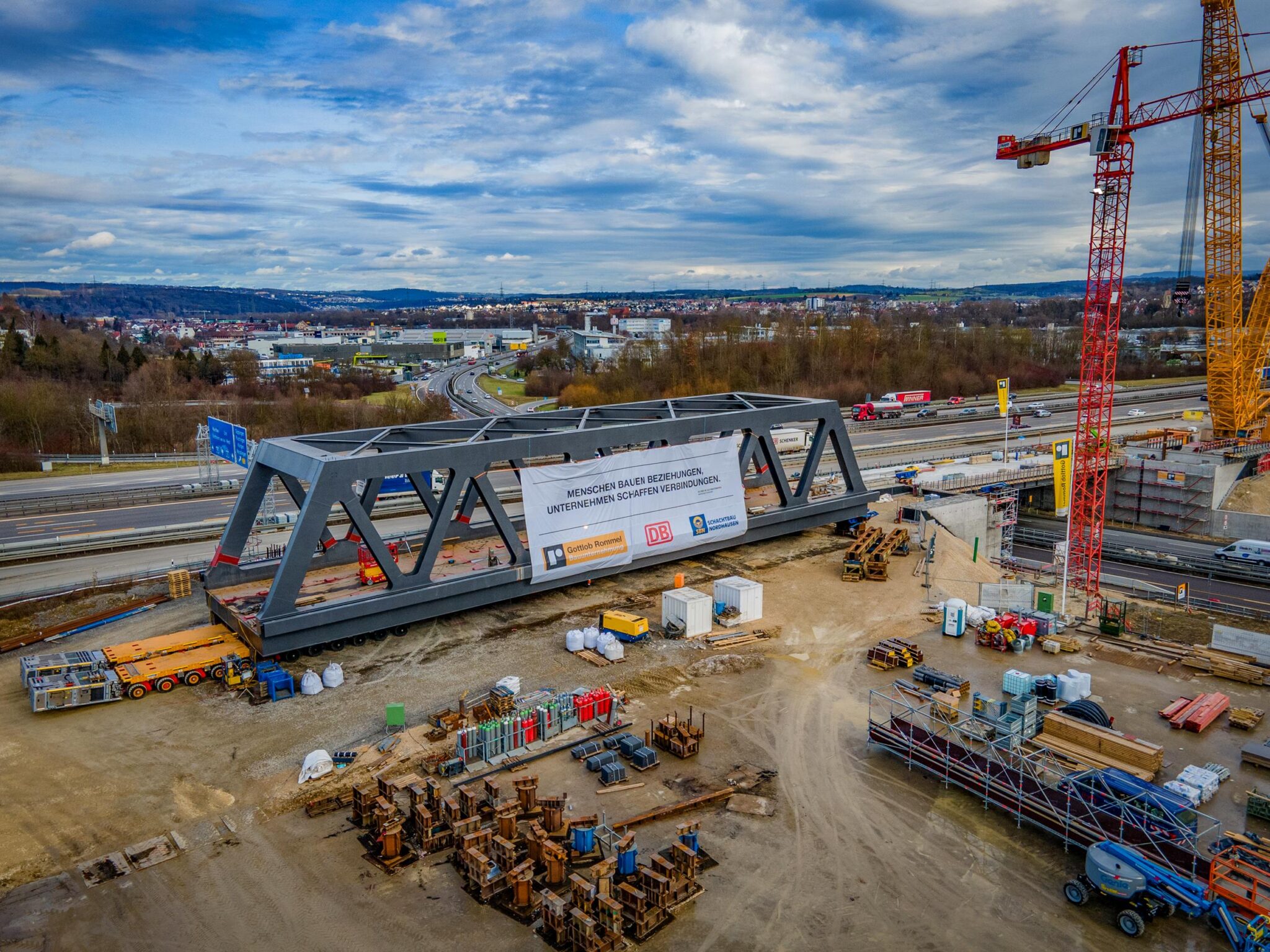 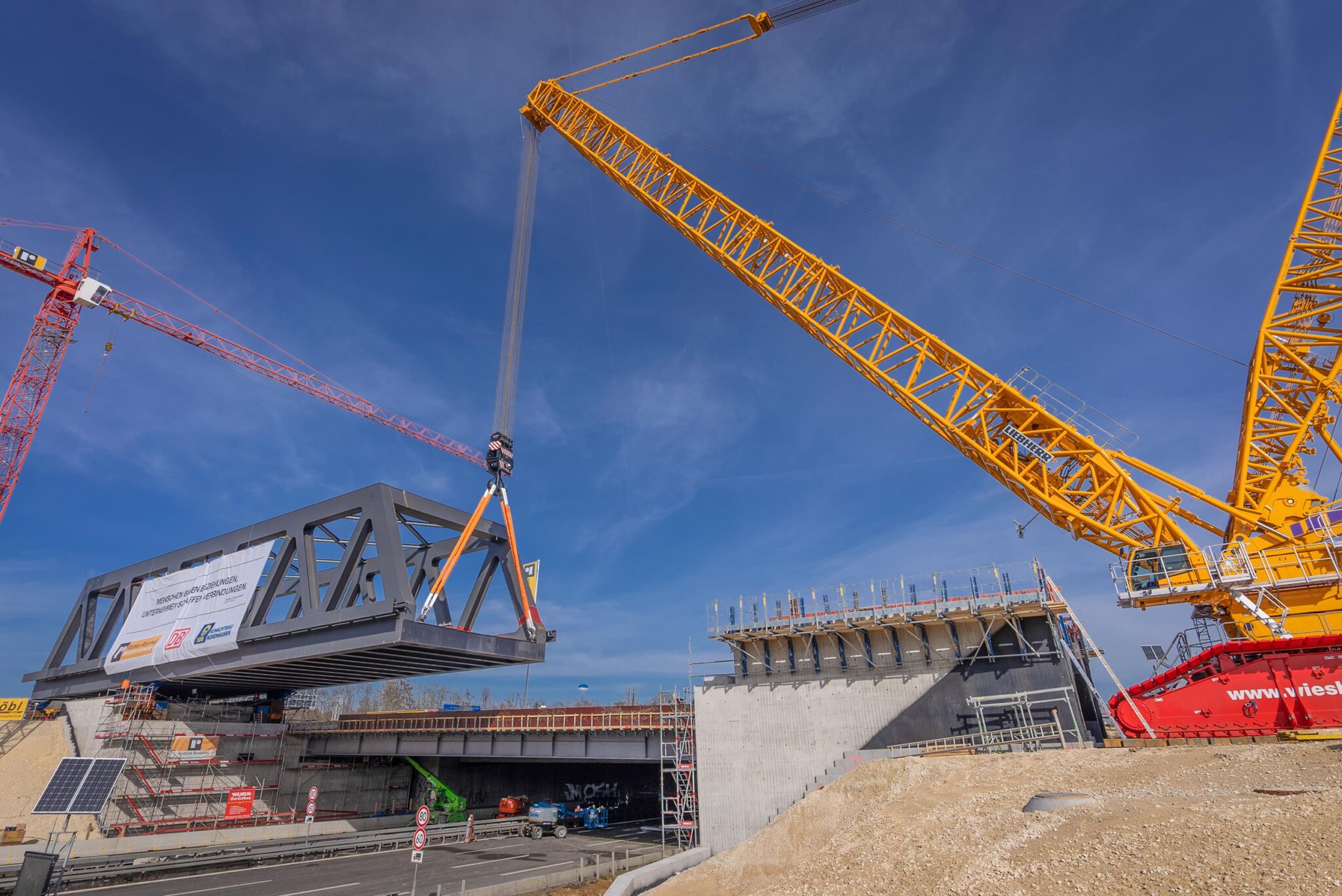 A self-propelled modular transporter Cometto SPMT, a skid track and a 1000t crawler crane has to be coordinated 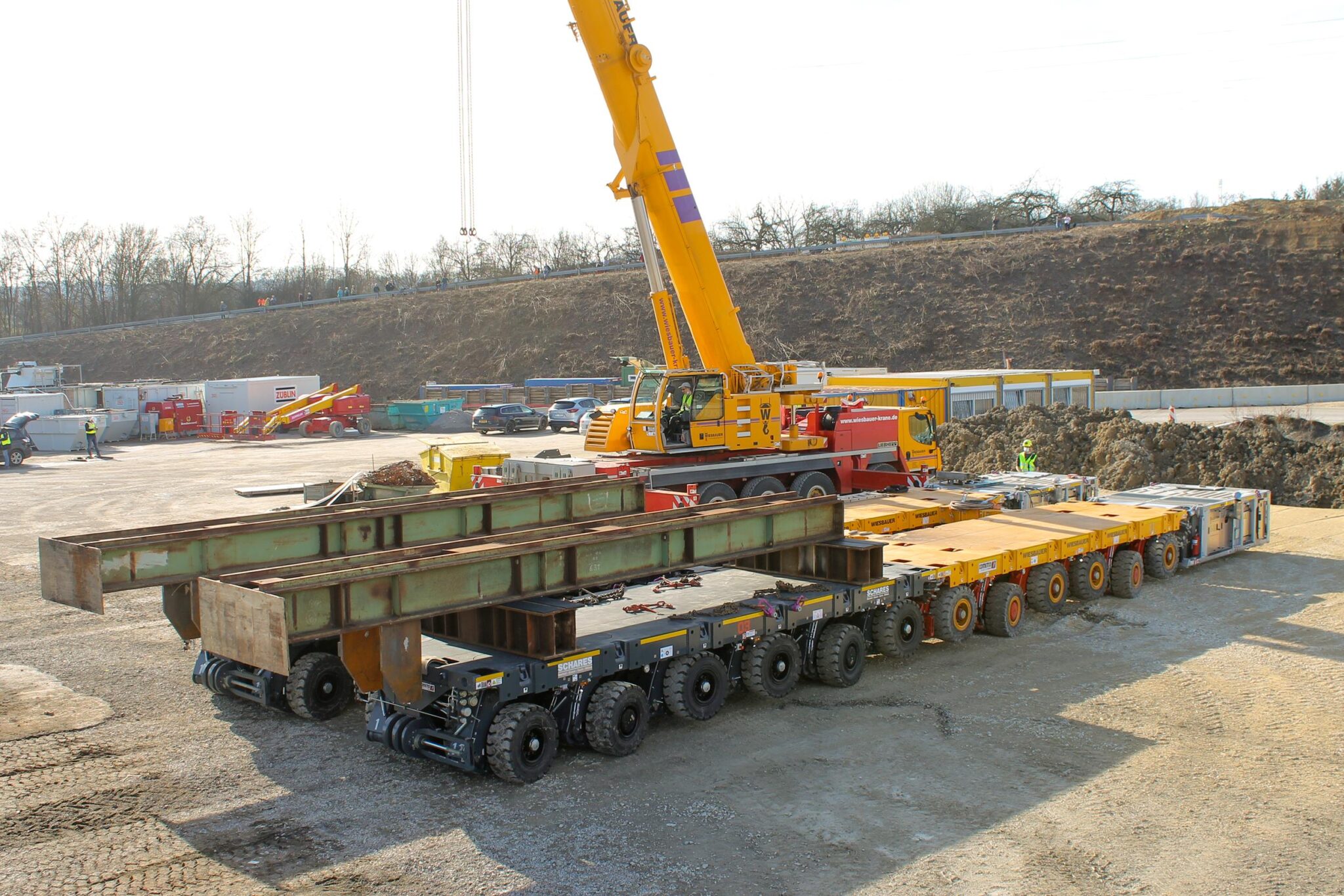 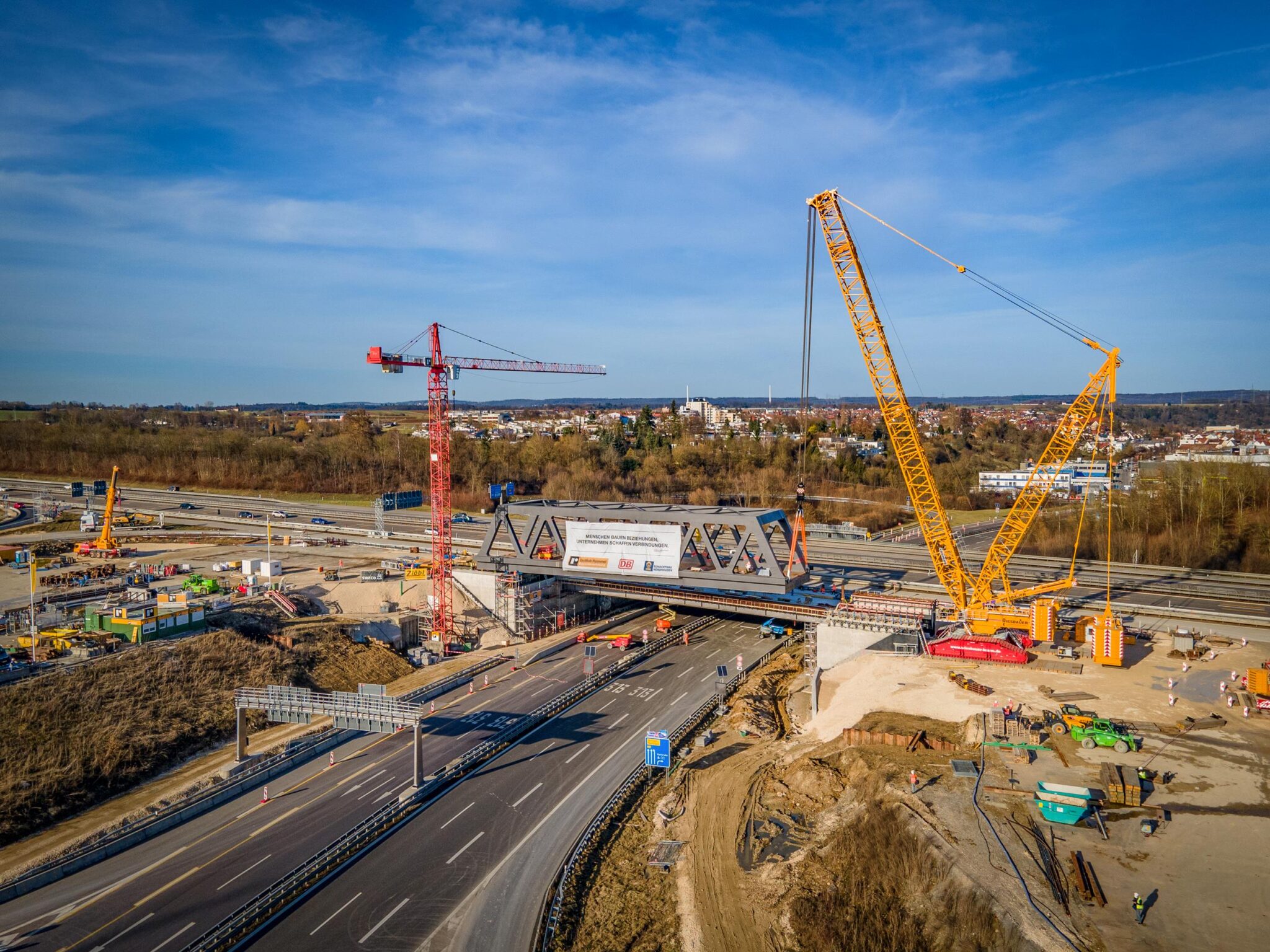 The Gateway Basel Nord and the Swiss Rhine ports (Schweizerische Rheinhäfen) are planning a key project in Basel to shift freight traffic from road to rail. To this end, the companies presented a nature conservation concept to the Federal Office for the Environment (BAFU) in October.